Satyajit Ray, a portrait of the master: Birth anniversary special


The Creative Person – Satyajit Ray, a little-seen documentary film on the master at work, made over half a century ago by Canadian filmmaker James Beveridge, comes across as a beautiful, objective and emotionally rich statement.

In 1967, noted Canadian documentary filmmaker James Beveridge made a 29-minute documentary on Satyajit Ray which few seem to have been able to watch as it was not publicized much or screened widely.

Beveridge's career spanned 50 years of documentary filmmaking, beginning with the great John Grierson and the National Film Board of Canada through the global mass communication that was slowly evolving.

In 1954, Beveridge quit the National Film Board when he got an opportunity to create a documentary film production unit in Bombay, India, for the Burmah Shell Corporation. From 1954 to 1958, he produced 40 films across the country. His film Himalayan Tapestry: The Craftsmen Of Kashmir won the 1957 President’s Gold Medal for Best Documentary Film.

After the family returned to Canada, Beveridge was commissioned by Tom Slevin, an executive producer for National Educational Television, to return to India to direct three films for WNET’s Creative Persons series: one on Satyajit Ray; one on Ustad Bismillah Khan, the shehnai master, and one on Wealthy Fisher, an aid worker in India.

Few cineastes, however, are aware of The Creative Person – Satyajit Ray, the film. Shot by William Brayne in black and white, it was produced by Tom Slevin and provided courtesy of the Indiana University Libraries Moving Image Archive.

Beveridge travelled to Kolkata to film Ray at work. The film journeys through a free-wheeling interview of the master as he shoots Chiriakhana (1967) in a Kolkata studio, then wanders across the city through the potter’s colony called Kumortuli where potters are giving shape to clay idols of gods and goddesses in preparation of some forthcoming pooja or festival, to the wide expanses of a location hunt through a village with its huge tamarind trees, a mandatory, dilapidated temple somewhere, which, Ray points out, is there in every village.

Ray adds that he finds it easier to shoot on location because it allows him, as director, to arrange his shots in different ways and to adjust the lighting more freely, something that is not possible within the confined space of a studio floor.

“When you are shooting in a studio, the shots are more or less set, you work more or less according to your plan," the filmmaker says. "On location, you are always improvising, deciding on new angles, being more inventive and more interesting or doing a given scene a bit differently.”

The film was made way back in 1967 when Ray was around 45, and he looks that — very young, very cheerful and the halo of greatness conspicuously missing. He appears to have been more approachable, which he was not later on, surrounded as he was by two or three circles of hangers-on disguised as 'staff' or 'helper' or 'photographer'.

Though the film mainly captures the director in a rather cheerful mood, it is enriched by the presence and the sound bytes given by all those who worked closely with him. Among them are Alakananda Dasgupta (later, Roy), who was the leading lady in Kanchenjungha (1962).

Dasgupta was studying at the Presidency College in Kolkata and her English is impeccable. “He would first explain the situation to us and then ask us to act out the situation the way we wanted it. He would not dictate to us to put our hands this way or that but to enact the feeling he had explained,” says Dasgupta, who dropped out of films altogether only to return more than two decades later to do character roles on television and in Bengali films and carve out a successful career.

"I had issues with the little boy who played Apu in my first film Pather Panchali (1955). He was very shy and I had to work to draw him out. I took him into confidence, tried to break his shyness and he worked the way I wanted him to. I have a way with children as I treat them as if they are adults, talk to them in whispers and take them into confidence. That makes my work easy where children are concerned.” 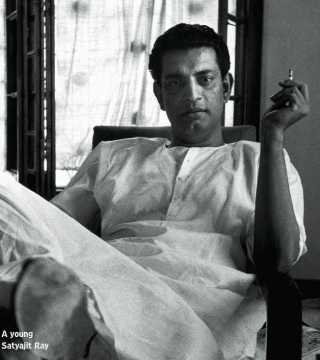 Karuna Banerjee, who played Apu’s mother in both Pather Panchali and Aparajito (1956), the first two in Ray’s first three-part film, was a post-graduate in English literature and worked mainly in theatre. She says in the film, “I had done theatre and was not interested in working in films at all. I did not like the character either. But once I began to work in the film under his direction, everything changed for me. He would just describe the situation and ask me to express that situation which made me feel involved in the entire film-making process. It was a wonderful experience for me as an actress.”

Others who pitch in are Subrata Mitra, Ray's first cameraman who later was given just to operate the camera while it was Ray who decided the framing, the shot, and so on. Mitra later became one of the outstanding directors of photography in Indian cinema.

The film cuts into extra-cinematic works of Ray through a collage of his illustrations, book covers, posters of his own films and his historic scripts which he explains himself on the soundtrack. “I wrote the script of my films visually, with dialogues on one side and illustrations on the other side, and found that this way of doing the script helps in discussions with the cameraman and the technicians.”

The costume sketches also find space in these scripts in the notebooks with blank pages bound in red cloth famously known as Kheror Khata. This gives the viewer an overall impression of the multi-talented Ray whose gifts were not confined to filmmaking.

We also find him playing the piano to compose the music track of his film. “I used a Scotch ballad as the basic music of my period film Charulata (1964) that was a blend of the violin, the vibraphone, cellos, the xylophone in combination with Indian drums. I have never written any music which can be clearly identified as either folk or classical or Indian or Western,” he says.

The camera follows him into a beautiful heritage home of the Mitters filled with beautiful furniture and artefacts, a huge chandelier, painted window-panes “which I used for my period films and I have made three”. One of these is Charulata set in the 1870s. He adds that they copied the floral designs on the window panes for Charulata.

At this point, his art director Bansi Chandragupta, who worked with him on several films and created history of sorts in the aesthetics and precision in the art direction of Ray’s films, mentions how Ray paid great attention to the detailing of his setting. “He soaks up the atmosphere to give the film the texture of everyday life. He takes care of all the details because he believes that details such as the décor, the furniture, the artefacts, pictures show the character,” sums up Chandragupta.

The best part comes when Ray muses about his love for the city of his birth and growth — Calcutta. “I have travelled abroad as jury at several film festivals. I like to go because I get to watch new international films and also see the places, but Calcutta is the place I belong to and love and cannot think of ever leaving."

The director continues, "I do feel very strongly about Western cities and the behaviour of the people in general, that it is terribly mechanical and they are not their own masters. Indians are not nearly as mechanized and they are their own masters to a certain extent,” as the camera wanders off to bare-bodied men taking a dip in the Ganga to illustrate how they have control over their lives.

“I am discovering parts of the city I had never known before," says Ray. "It is a very lively city. We have a very strong theatre movement, a literary movement, there is always something happening, people are reacting to events and situations in a very voluble fashion. They are also intellectually very alert. But their reactions sometimes also lead to riots which only go to show that people are always reacting and that is what I find very interesting.”

Towards the end, the late Debaki Bose, the noted filmmaker, says that though Ray’s “eye” was partly Western, his films depict the conflict between Old India and New India. The closing shots are taken during the shooting of the film Chiriakhana with Uttam Kumar and Shailen Mukherjee getting ready for a scene. The camera moves up to take an overhead shot and we catch a glimpse of the entire set while the film moves out of the frame and comes to an end.

Another interesting feature of this film viewed in retrospect is that most of the personalities featured in it are no more, including Ray himself. Among them are Subrata Mitra, Karuna Bandopadhyay, Bansi Chandragupta, Uttam Kumar, Shailen Mukherjee and film critic and film society movement activist Chidananda Dasgupta, The rest are very old now, such as cinematographer Soumendu Roy, Alakananda Dasgupta, Soumitra Chatterjee and Madhabi Mukherjee.

Many famous filmmakers like Shyam Benegal, Goutam Ghose and Utpalendu Chakraborty have made documentaries with Satyajit Ray as the subject. Having watched them all several times over, this writer concludes that perhaps Beveridge’s celluloid portrait of Ray at work when he was already quite famous internationally but still very grounded and accessible is the best. It is the only documentation made by an “outsider” who did not know the language Ray spoke or made his films in, who was not familiar with the cultural backdrop of Calcutta the way Ray described it, and yet it comes across as a beautiful, objective and emotionally rich celluloid statement on Ray. Beveridge does not pretend to be an “insider” who knows everything there is to know about Ray but reflects his own impression of the filmmaker.