Ashvin Kumar, whose film on the missing menfolk in Kashmir opened the 14th Habitat Film Festival, spoke of the 'crisis of compassion' in India and why he wrote his screenplay mainly for millennials.

No Fathers In Kashmir opened the 14th Habitat Film Festival, on 17 May, to a full house of over 400 people. In fact, a second hall was opened to accommodate all those in queue.

After four years of hard work making the film, it took the Central Board of Film Certification (CBFC), widely known as the censor board, just seven screenings and six hearings to ‘mutilate’ the film, writer-director Ashvin Kumar told Cinestaan.com.

In fact, the last of those hearings was on the very day the Pulwama attack happened (14 February 2019). “It was one of the most difficult periods of my life,” Ashvin Kumar said.

Ashvin Kumar noted that films at the Habitat Film Festival, and other similar festivals, don’t need to go through a certification process. Thus, the version that the audience saw at the Stein auditorium at the India Habitat Centre was the way the director intended for the film to be seen.

The filmmaker was clearly overwhelmed by the response to his work and said he always saw No Fathers In Kashmir as a film for a theatrical release. The film was released on 5 April, but the director felt it was robbed of a longer play in cinema halls by the "huge hungama" over the Vivek Oberoi-starrer PM Narendra Modi.

Amazon Prime Video, Netflix and other over-the-top (OTT) platforms were never ‘plan A’ for a film like No Fathers In Kashmir, the Oscar-nominated director told Cinestaan.com. With No Fathers In Kashmir being a completely crowd-funded film, it was even more demanding for him and everyone involved in the project. 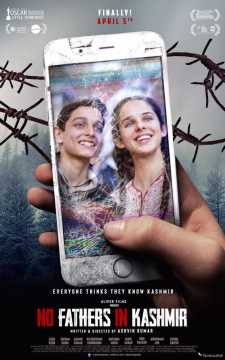 No Fathers In Kashmir tells the story of two children, from differing backgrounds, in search of their missing fathers. Noor, a British passport holder, will not slow down until she gets some answers. Majid has remained in Kashmir and accepted his fate.

“Coming off two feature documentaries that I made in Kashmir, it became very clear that people’s shutters were coming down really fast," Ashvin Kumar told the Habitat audience when asked what inspired him to make such a film.

"I wanted a way of understanding what I call the 'crisis of compassion', which I think is the critical issue in Kashmir, in a way that it would allow millennials, mainly because that’s who I feel will be the architects of a possible solution, relate,” he continued. “I came up with this screenplay primarily for millennials in the rest of India. To express this idea that there is a humanity that can be tapped into. It exists. The polarization that we have seen in our society, particularly of the last five years, has taken further and further away from a nuanced understanding of complexity in general, and in particular in the context of Kashmir.”

The director admitted his answer was long-winded, and said all he wanted to do was make a love story. “The exuberance of first love and heartbreak and how that can be problematic in a place like Kashmir," he said. "The tragedy of dreaming. The tragedy of having entire villages that have lost fathers, and are filled with 'half-widows' and 'half-orphans'. And yet laced with the optimism and hope that characterized those teen years we all lived through. So it was the idea of creating this nostalgia for that time and also the sense of deep regret and dismay which exists in Kashmir.”

The post-movie discussion was moderated by journalist Shoma Chaudhury and it immediately turned to the question of Kashmir. “You come from Bengal, yet it seems Kashmir moves you creatively and emotionally. What were the trigger points for that,” Chaudhury asked.

“The trigger point is what is unfolding around us and the rest of India today," Ashvin Kumar responded. "Kashmir is a dark mirror image of what happens when you allow the state to enter your private life. If you asked me about 10 years ago, when I made Inshallah, Football (2010), it would have been more of a foreboding. It would have been me saying that this sounds totalitarian, this sounds fascist. This shouldn’t be going on in our country and it is happening in this state, up in the north, where people are being persecuted and oppressed. It is happening under the secular republic, the largest democracy in the world. In today’s day and age, we have seen it unfold, in front of our eyes.”

The tagline of the film is ‘everyone thinks they know Kashmir’, and that perfectly sums it up. People’s perspectives are shaped by what they read, see and hear on a daily basis.

"Every time the shutters came down and someone would watch them, it would force an opinion. It would force the viewer to take a position. Very much like Mr Modi does today. He compels you to take a position. You have to be more nuanced. Even within liberals, we all have to take positions. To speak out or to not speak out," Ashvin Kumar said when asked about using the outsider's eye, Noor being a British passport holder.

"This idea of forcing someone to take a position was something I didn't want to do in this film. I wanted people to come with as much open-mindedness as this girl comes to it. In terms of what she wants in the film. A selfie with a terrorist and that's pretty much how it starts. It ends in a very different way. That journey of entering a space that you really think you know something about but actually you don't is where I wanted to put the audience.

"If people could go away from this film with 'Hey, I need to research about this more', or just go away with a feeling, I think the film is quite successful."

Ashvin Kumar ended the session with anecdotes from his battle with the censor board. “The CBFC battle shows you the farcical nature," he said. "By the seventh hearing, it became less about trying to make the film more appropriate to younger audiences. I had to remind the committee that this was your original purpose. This is why the Indian censor board gets involved in the first place.

No Fathers In Kashmir was the opening film at the 14th Habitat Film Festival at New Delhi's India Habitat Centre. The film was screened on 17 May 2019.

No Fathers In Kashmir