Director Milind Zumber Kavde had announced his upcoming film Takatak some time ago. The first posters of the film, starring Prathamesh Parab, Ritika Shrotri, Abhijit Amkar and Pranali Bhalerao, are finally out now.

The two posters shared by Kavde on his Facebook page give a clear idea that the film is an adult comedy, which is rare for Marathi cinema.

The first poster, which features Parab and Shrotri, sees them against the backdrop of a college whose name — Za Raa Thoke Mahavidyalay — is clearly suggestive. The girl is seen showing her ring finger in a way a person would show the middle finger. 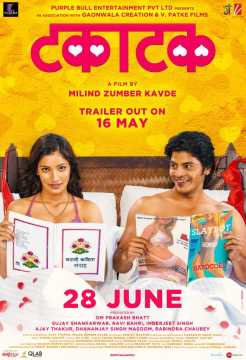 The second one sees Amkar and Bhalerao lying in bed with minimal clothing. The guy is holding a girlie magazine and, funnily, the girl is reading a book of Marathi poems.

The director released a short video yesterday which said the posters of the film will be released the next day. The post also has an audio of a song from the film called ‘Aapla Haath Jagannath’. The double entendre in the line is no secret.