Ahead of the release of Chhota Bheem’s fourth big-screen outing, co-director and creator Rajiv Chilaka discussed the long years put in by his team at Green Gold Animation. Chhota Bheem: Kung Fu Dhamaka arrived in theatres on 10 May, right during the summer school holidays, to take viewers on a trip to China.

The popular character from the Pogo television series, created by Chilaka in 2008, is a true success story to emerge out of Indian animation. Apart from the animated series, there have been over 25 television films, which shows audiences are keen to see more of the kiddie gang from Dholakpur, a fictional place in India.

In a telephonic conversation, Chilaka spoke to Cinestaan.com about what fans can expect from this latest film set in China, the production delays and their reasons, and what his future plans are for the character. Excerpts:

This is the fourth feature film for the characters. What was the idea behind setting the action in China?

There are a few things that are happening for the first time in this one. Earlier, we have made [films] in 2D avatar. This is the first time he [Bheem] is being shown in 3D stereoscopic avatar. In this film, Chhota Bheem and his friends travel to China, so the landscape is pretty much larger-than-life.

Kung fu is basically the theme of the movie. We wanted to connect with what kids love and [they] love kung fu. Even adults love action, so we felt that it would be great. When you think of kung fu, you always think of China.

This film has taken us considerable time to make. When we saw the script, I felt this is a movie that [needed] a bigger canvas. So we have taken our own sweet time to make this film. It was in production for three years, and then add to that almost two and a half years of pre-production and development of script and [other things]. 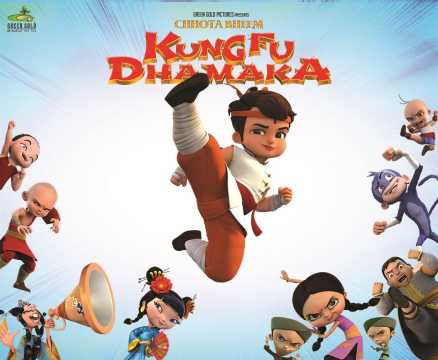 Was it delayed for any reason, or you just decided to spend more time on it?

This film needed more time. Our plan was to release the film last summer, but then we wanted certain things in it to be fixed. We didn’t want to rush in. We knew that if we want to make a good film, we need to take that kind of time.

We went through different iterations on story, development and stuff like that. We spent a lot of time on characterization and action sequences. Generally kids have a tendency to see the film again and again. [If] it’s on TV or [wherever]. If they repeat it 20 times, I didn’t want them to get bored. This film is designed in a way that kids will keep watching it again and again.

Since the film is set in China, are you hoping that it might be release there?

Absolutely! We have shared some footage with Chinese companies and they have loved it. There are certain requirements to release a film in China, you have to go through their censor and all. So after the release of this film, we are going to take this version of the film and apply officially there.

They go through a certain time frame, so we will do the same. We have a positive reply from them, so later this year, we will be releasing in China.

Next month, we are releasing in the UAE, Dubai and Abu Dhabi. We are looking for an appropriate time to release in Southeast Asia, in countries like Indonesia, Malaysia, Singapore, and Thailand. We are looking at releasing in some of the African countries as well and North America. We want to work with these other partners to have a global release.

What should Chhota Bheem fans expect from this outing?

This film will not only make the fans very happy, but will also attract many new fans. It’s a masala film, it’s got everything and there is an underlying message of friendship. So there is a lot of masti, fun and kung fu there. For Bheem’s fans, they are going to see him for the first time in a 3D avatar, So this is something that they should watch in theatres, not wait for it to be on TV.

There are a lot of firsts that we have done in the film. We have also shot a promotional song at the end of the movie with Daler Mehendiji. There is going to be a music video at the end of the movie. [It] has been shot in 3D Stereoscope and merged with animated characters. This is the first time it’s happening. 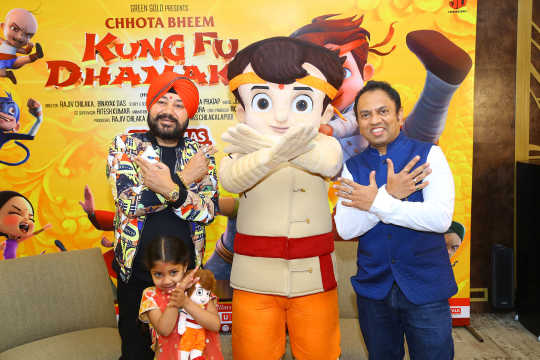 We are very excited; we have a great song that Sunidhi Chauhan [has sung]. There are two songs by her and, at the end of the movie, one song by Dalerji. So the canvas is larger than life. I think kids will laugh a lot and also get involved in the story.

When we were editing or mixing the film, we were forgetting a scene we have probably seen 200 times. [We were] getting involved in the movie, so I think it’s the best movie we have ever made.

What were your visual and textual references for the film?

Majorly, we did a lot of research on China. The set and background is on China. We even considered travelling to China, but we realized China is such a vast country that covering anything physically won’t be possible and our film is set in the past, so we thought we will take references from Chinese films.

For kung fu, we have referred to so many movies of Jackie Chan and also seen how his style is different. We have also seen some classical Chinese kung fu movies. We have seen Chinese historical movies, what they wear, what kind of costumes [they have].

We also referred to animated movies which have action like Kung Fu Panda (2008) and a lot of new Chinese animated films that have been released recently — how do they look, because the movie is set in China, all the characters are Chinese except for these Indian kids who travel there, so that was the challenge to make them feel that all these characters look Chinese, think Chinese and are created in China. A lot went on, the film took a long time to make.

Also, Bheem [is usually] in his traditional avatar with his dhoti. We can’t do kung fu in a dhoti and second, when we have the cuter, smaller version of Bheem, we realized that he needs slightly longer legs [for this film] to give that kung fu feel. So we made him slightly older in this movie, a year or two older.

It has to be believable that he is fighting with somebody in the competition that he attends. In fact, the look and feel of the character, we changed it a few times. It almost took us six months just to figure out how Bheem should look.

We had to make him cute. We have given him a shirt in this movie, which Bheem generally doesn’t wear, but he is travelling and in a competition, so we gave him some special costumes. There is a song, called ‘Circus Jam’. We have given all the kids new costumes in that song and in a few scenes in the movie too.

Since this character, kids and adults see him in television series and films, do you have to keep changing it and keep it fresh?

Yes, absolutely, we have to keep it fresh. Also, quality wise, we had to enhance it a bit because it was like a larger-than-life Bheem, it’s a household name today. We have seen sometimes people criticize [us]. We felt our earlier movies, people would compare with $200 million productions of Disney and others. Here we didn’t even have a $1 million budget earlier.

We had to do something which will make someone connect with the character of Bheem and make them proud that Indian animated movies can be good as anyone else anywhere in the world. So that was one of the things we wanted to feel, that [audiences] should be proud seeing this film. We pretty much redid the movie once just to make sure this quality is on a par with its Western counterparts.

What other plans do you have for the franchise?

We have a lot on the plate. We will continue doing what is happening on television. I don’t know if you have noticed, but two, three years on they stopped making Chhota Bheem on television, probably a few specials keep happening. But now, we want to relaunch Bheem with a brand new avatar.

There will be a sequel to the movie we are doing on Pogo, we will be making some 10 episodes for Pogo which will go behind the feature film. We are looking at launching our first musical across India. It will be a live theatrical experience, something you see in Disney musicals.

There is a spin-off series called Mighty Little Bheem which is happening on Netflix that was released last month. It’s India’s first Netflix Original and has gone to 190 countries. The show is doing extremely well across the world, including the US and Latin American countries.

We are also contemplating making a live-action version of Bheem as a theatrical film. Currently there is a trend of animated movies being made into CGI movies like The Lion King (2019) or The Jungle Book (2016). I think there is an opportunity for the character of Bheem.

I think the West has been getting the same kind of content but yes, we are looking at making something like this globally, not just in India. Fingers crossed for that. We are going to continue our merchandising brands as well as games and building an entertainment world of Bheem, so that goes without saying.

Unlike other countries, India doesn’t produce as many animated feature films. What other films are in the pipeline at Green Gold Animation?

Yes, we have a few ideas that we want to take on the floor, but at the same time, we are studying and understanding the Indian market, and what kind of animated films work in India. So this is going on with this feature film. I think we will see what other companies are starting to make. I think this movie will set a new benchmark for quality. I feel that, I hope so. Fingers crossed.