Ganesh wrote the screenplay, while his father and literary giant Ratnakar Matkari wrote the dialogues.

Mahesh Manjrekar’s Marathi movie Bhaai: Vyakti Kee Valli (2019) is a biopic on the multi-talented artist Purushottam Laxman Deshpande aka Pu La Deshpande aka Bhaai. Starring Sagar Deshmukh as Pu La and Iravati Harshe as his wife Sunitabai, the film was made in two parts and appreciated.

Ganesh Matkari’s screenplay played a major role in the smooth narration of Pu La’s various life events; from his childhood to his death. Matkari recalled his journey of researching the entire life of the celebrated personality and putting it on paper in an exclusive conversation with us.

It was, obviously, a challenging exercise for him. “It’s because people have a large image of his [Pu La's] in front of them; as in what personality he had. His work is huge and his fans are spread all over Maharashtra. He is one person who witnessed and took part in all major literary phases that took place in the last century. When you decide to tell a story of a celebrated personality, it is not possible to show everything. Even in biopics you have two hours to play with; in this case it was four hours,” said Matkari.

Matkari was working on another project with Manjrekar. While doing so, the filmmaker asked him to write the screenplay for Bhaai.

Matkari added that as Deshpande was involved in a lot of areas — literature, theatre, films, including, acting, music and direction – it was impossible to show his whole life in four hours. “Plus, social work was also a prominent part of his life. Towards the end of his life, there was a phase when he received Maharashtra Bhushan,” he added.

While interacting with Manjrekar, Matkari realized that the filmmaker’s vision was the personal life of Pu La and Sunita Bai, along with the backdrop of Maharashtra’s cultural background and the people with whom they had relations. “In the film you will realize that their inter-relationship plays a more important role and everything else is like a backdrop,” he said.

Manjrekar had produced the play Vyakti Aani Valli where he played the character Babdu. He got interested in the characters. “But somebody had already made a TV serial on them. So, he thought that if the characters are so interesting, how interesting would be the person who created them? Then he read Aahe Manohari Tari and became clear,” Matkari said.

Bhaai had journalist Amol Parchure turn into creative producer. Matkari did all the research with him. Naturally, it was a lengthy and extensive process. “We decided to read everything available,” he said. “It was almost a year-long process. Amol and I read all literary works of him and also things which were written about him.” 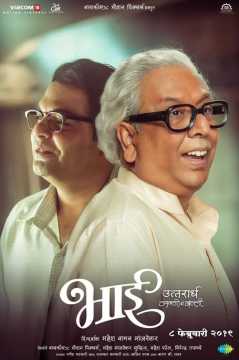 “Apart from Aahe Manohari Tari, there is another work called Amrut Siddhi written by SH Deshpande and Mangala Godbole. It has a lot of things about Pu La, including criticisms. In some chapters, there are details about what happened in his life after specific episodes, which wasn’t found anywhere. Even Aahe Manohari Tari doesn’t have this in chronological form. We also read articles people wrote on Pu La after he passed away. There are books on them,” said Matkari.

Matkari’s father Ratnakar Matkari is a celebrated author and playwright. He wrote the dialogues for Bhaai. “He had already adapted two of his works on stage – Vyakti Aani Valli and Asa Mi Asami. That proved to be useful for writing dialogues,” he said.

Matkari added that Deshpande’s writing was basically about his observations of surroundings. He based Vyakti Aani Valli on the people he met in his life. The writer duo did an interesting experiment of including things written by Deshpande as dialogues. “Including the characters from Vyakti Aani Valli also gave us the opportunity to include some of Pu La’s actual writing in the script as dialogues. A nod to the great writer,” he said.

Babdu is the character played by Girish Kulkarni in the film, from Deshpande’s Vyakti Aani Valli. The film shows a fictional meet between Babdu and Deshpande.

Films Division has an extensive and interesting documentary on Deshpande where he is speaking about his life and career. The film is available on YouTube. When asked if he referred to that documentary while writing the film, Matkari said, “A lot of things in the documentary are a part of his literature. As in, he has spoken what he has written. So, we had read all of it before.”

Matkari never met Pu La, but he has seen him once. He had performed a children’s play Dhag Dhagojicha Paani Pratap at Mumbai’s National Centre of Performing Arts (NCPA) where Deshpande was one of the guests. Matkari didn’t have the courage to meet the man himself. “But the meeting happened now while writing the screenplay of Bhaai: Vyakti Kee Valli,” he said.