If you are creating history, who says it is going to be easy: Parul Yadav on remaking Queen in 4 languages


As Queen (2014) completes five years today, actress-producer Parul Yadav, who seeks to remake the Kangana Ranaut-starrer in Tamil, Telugu, Kannada and Malayalam, speaks about the need, challenges and spark that led to the project.

Photo: Prasad Nair
give your opinion

The idea of remaking South Indian films in Hindi has been all the rage over the past few years. From Wanted (2009) to Singham (2011) and Simmba (2018), Hindi filmmakers have often turned their attention down South in search of content.

But Parul Yadav is going the other way. The actress-turned-producer is remaking Kangana Ranaut's iconic Queen (2014) in the four Southern languages simultaneously.

"Queen is a very universal subject, that every girl in any part of the world could connect to," Yadav told Cinestaan.com in a telephone interview. The reason, she suggested, for remaking the film was to take the "unique journey" of Queen to a growing South Indian audience.

The project is quite ambitious, to say the least. With Tamannaah Bhatia, Kajal Aggarwal, Manjima Mohan and Yadav herself, the film will be remade in Telugu, Tamil, Malayalam and Kannada, respectively.

"It was only when we started our workshops that I really got sleepless nights, and I hoped I had not got into trouble for picking something that was a cult movie," Yadav confided, But it has not prevented the actress from going full steam with the project.

Since winning her Filmfare (South) award for Best Supporting Actress in Bachchan (2013), Yadav has gone on to carve her own niche in the Kannada film industry. As producer, she now has the onus of transforming a cult Hindi film into a pathbreaking one for South Indian cinema.

It is an exciting project, to remake Queen, but also very ambitious. Tell us how the idea began.

I had seen the movie, and I really loved the movie. I came out and made a few calls to the Kannada industry for a remake. It really touched me. There was one producer from Chennai, I would not like to name him. He bought the rights and was hatching it for almost a year. Nothing really happened on it, and Manu Kumaran [son of KP Kumaran] came in. It was his brainchild to do the film in four different languages, with four different actors.

That’s how I became co-producer and came on board.

This might be a question you would have heard many times before. But were there any apprehensions about the comparisons with the original that you will have to face?

When I started off, it was in all excitement and all the rush of the project, for which I said yes. Then, we went on and cast Kajal, Tamannaah and Manjima.

It was only when we started our workshops that I started getting sleepless nights. I hoped I had not got into trouble for picking something, which was a cult movie.

I knew I would not only be compared with Kangana [Ranaut] but also with the rest of the three actors. Of course, I was worried about being compared. The only thing is to do it differently.

There is no way you can outdo Kangana or the rest. It is how differently you can portray it, and your own touch and understanding of the character.

A key characteristic of Queen was in the local nuances of its characters. While remaking the film, what were the elements you decided to keep, or add?

Queen is a very universal subject, that every girl in any part of the world could connect to. It's not that only an Indian girl can connect to the story. We wanted to cast a local regional heroine who could connect with the audience.

We also wanted to get the native factor of the story in. So, the soul remains the same as the story. We just got the little nuances.

For instance, my character, Parvati, is from Gokarna, so I worked on how a girl from the region would dress, speak. Tamannaah’s character is from Rajahmundry, so we gave her dialect tuitions for two-three days. So, people can relate to their very own 'Queens'.

Normally, when a producer does a remake, they do it only with the intention of making money. Believe me, a producer is not going to get any awards or recognition [for a remake]. For that matter, we will not be considered for any National award either for the remake. You don’t get awards for Best Director or Best Movie for a remake.

With Manu Kumaran, this was not the intention. That is also the reason we cast four different heroines. We could easily have dubbed it into four different languages, using the same cast, and made money.

Somewhere, we are all feminists deep down. And we wanted this story to really be said in a nice way, to make the film.

It is one thing to do a passion project, but as producer, the logistics of four different films are quite different and hectic. How did the management take place?

I think we just went head first into it. But it could have been any ordinary remake, and we did not want it to be that.

Of course, the logistics were very challenging. Even simple things as 180 people flown out from India, their visas, flights, bookings, etc. Casting different people for each film.

There are also 31 songs in the entire project. Amit Trivedi has also done four songs. But in all, there are 31 lyricists out there. And as a production company, to get the songs, lyrics, and getting 31 singers to do the songs, the dates, was a task.

And you were playing the lead in Butterfly as well.

And I had my own lead role to do. It was, of course, a nightmare. But then, if you are creating history, who says it is going to be easy.

If you want to walk the path, it is going to be difficult, and we wanted to make history. 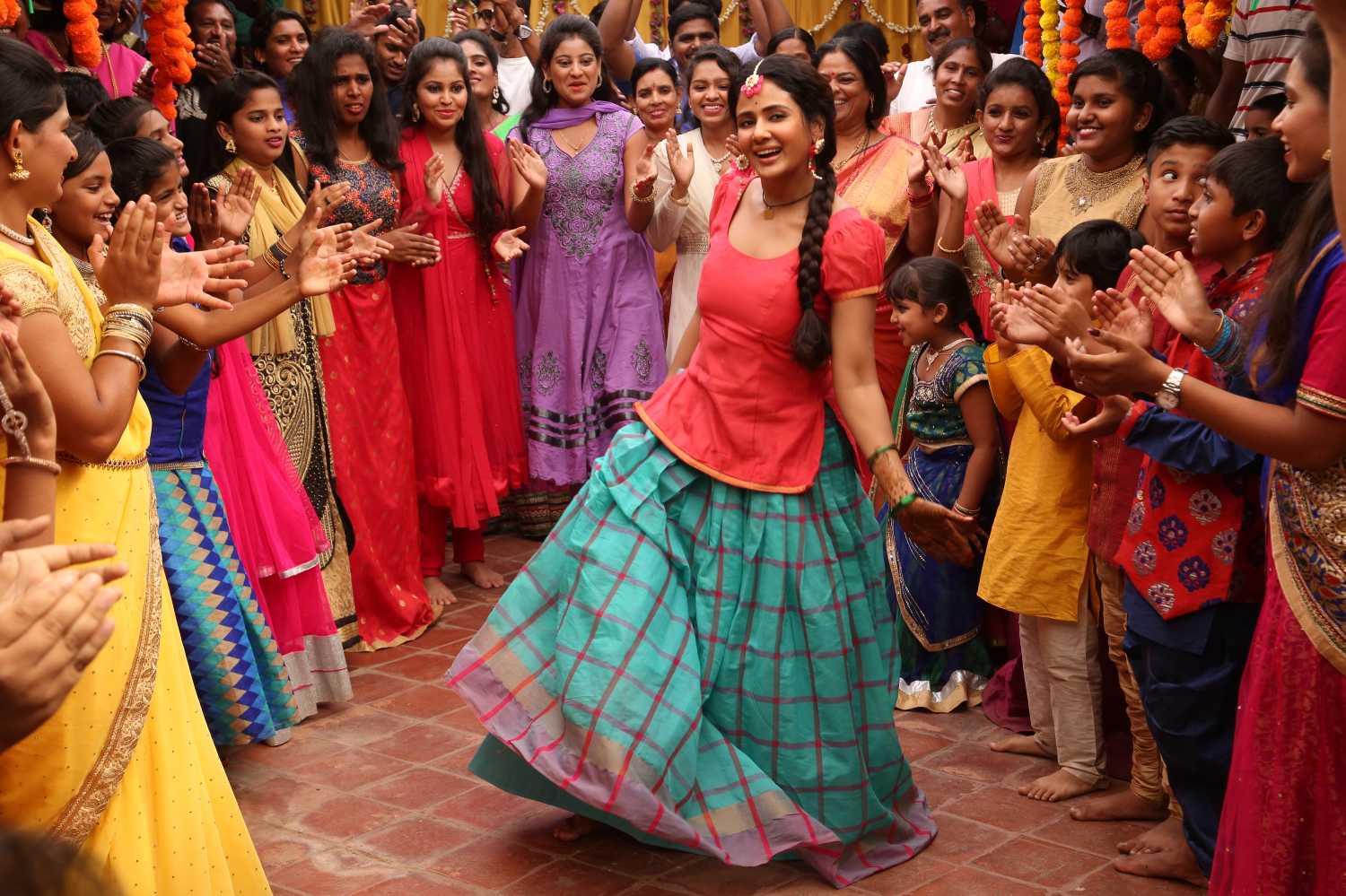 Did you happen to have a chance to speak with Kangana Ranaut about the film?

I spoke to director Vikas Bahl. I met him at a party, and he recommended me not to see the movie, and to do my own thing.

As an actor, I wish to not have seen the movie to do my own thing. But as a production person, I had to see it several times to understand the location and other elements.

We are getting in touch with Kangana Ranaut because we wanted her to come in and hopefully launch the trailer and watch the film.

You mentioned about not wanting to watch the film but having to watch it as a producer. Was it a clash between the two sensibilities, being an artiste and a producer?

I was completely involved in the project, but 2-3 days before the shoot, I would tell everyone I am not going to answer any calls. The story is about a timid girl, underconfident. On the other hand, as a production person, I had to be very commanding and demand things to be done in a certain way.

I made sure 2-3 days in advance I would tell people not to ask me questions on the sets, as I wanted to be in character. Having said that, I was a little worried because there were three other actresses. I did not want to dominate them in any way being a co-producer and all.

To balance out things, I and Kajal shared the same director. So every time Kajal had to shoot a scene, I had to be present as a production person. But I would try to be away from the set, so as to not make her apprehensive. Or even feel like her performance is influencing mine or vice versa.

As an actor, I didn’t want them, even for a nanosecond, to feel that someone is looking over them.

South Indian cinema has seen a spurt of strong female-led films. Whether it is Nayanthara or Samantha Ruth Prabhu, actresses are carving their niche. Was that a reason why you thought the timing for a Queen remake in all four South Indian languages was right?

It was not about right now but about the story of Queen. The disparity [between men and women] works in every girl's head, let me tell you this. Whether it is money, taking creative calls, or having an equal role in the movie, women have faced it and have been going through it for many years.

The last few years, things have been changing. In Hindi cinema, a lot has changed. The South is slowly warming up to it. If you see Nayanthara, if you see Samantha, they are getting movies which revolve around their characters.

But for every 10 movies by male heroes and superstars, there is only one or two led by women. Otherwise, it is just women singing around trees, or the hero saving them, or there is a big action sequence... In all, sometimes the women are just there for 15 minutes. That’s the totality of their screen time.

Why can’t there be duality? Five movies made on heroes, and five led by heroines. When that happens, in a true sense, the disparity will be gone.

But the South is warming up to it. We are now open to doing woman-oriented subjects.

It also depends on the audience a great deal. For the mass audience, they go for their action heroes. Friday, Saturday, Sunday, the audience would do it. That they should do for woman-oriented subjects as well.

Until audiences do that, the producers won’t have the courage to put money into films like these. Who wants to lose money?

That would be one of the expectations as a producer, I guess.

It is running there in the back of the mind. Why do men get Friday, Saturday, Sunday? With due respect, even if the film is bad, I’ve heard people say, 'Arre yaar, movie buri bhi ho toh opening mei chal jaayegi.'

You don’t hear that with a woman-oriented film. They have to have a good movie. The subject has to be good. For the lead heroes, whether the movie is good or bad, the fan’s loyalty will guarantee them a good opening weekend.

When that begins to happen for a female-led film, we can talk about equality in terms of following, and it will lead to more such content.

Queen is turning five. What was the key scene from the movie that caught your attention?

If you remember the climax, he meets her in a coffee shop and asks if they can reconsider the relationship. She tells him, ‘Listen, can we talk about this later? I have to go to a concert.’

So she is not bitter about it, or angry. She has elevated herself so much that this man does not matter to her. What matters is her happiness. She found herself and understood the joy of enjoying herself.

For me, the climax portion was a certain yes.