IAWRT India Chapter discussed the impact and the future of the #MeToo movement and the possibility of collective healing from the pain of harassment.

The International Association of Women in Radio and Television (IAWRT) organised a roundtable conference on the #MeToo movement in India as part of the 15th edition of the annually held Asian Women’s Film Festival (AWFF). The conference was held last evening (4 March) at the India International Centre (IIC) in Delhi.

The roundtable was chaired by IAWRT India Chapter’s managing trustee Nupur Basu, an independent journalist and award-winning documentary filmmaker, along with the artistic director of the International Film Festival of Kerala (IFFK), Bina Paul.

The panellists included several noteworthy and upcoming women who were gender and sexuality activists, documentary filmmakers, journalists, representatives from UN Women, Men Against Violence and Abuse (MAVA), Women in Cinema Collective (WCC-Kerala) and social workers from across the country.

Basu launched the roundtable asking for discussions around the “inflection point” that has come to pass in the #MeToo movement related to the platform it has provided to the majorly subdued voices of sexual harassment and the degree of the retributive impact it has had on the issue.

Bina called for the need to “rearticulate the conversations around #MeToo with the collective cry of pain” that the movement has born out of.

Citing the difference of opinions between older generations of feminists who believe in due processes involved in dealing with cases of sexual harassment versus the younger generation who consider due processes a failure, she urged for a discussion that could explore this gap between the character of feminism, justice and collective healing. 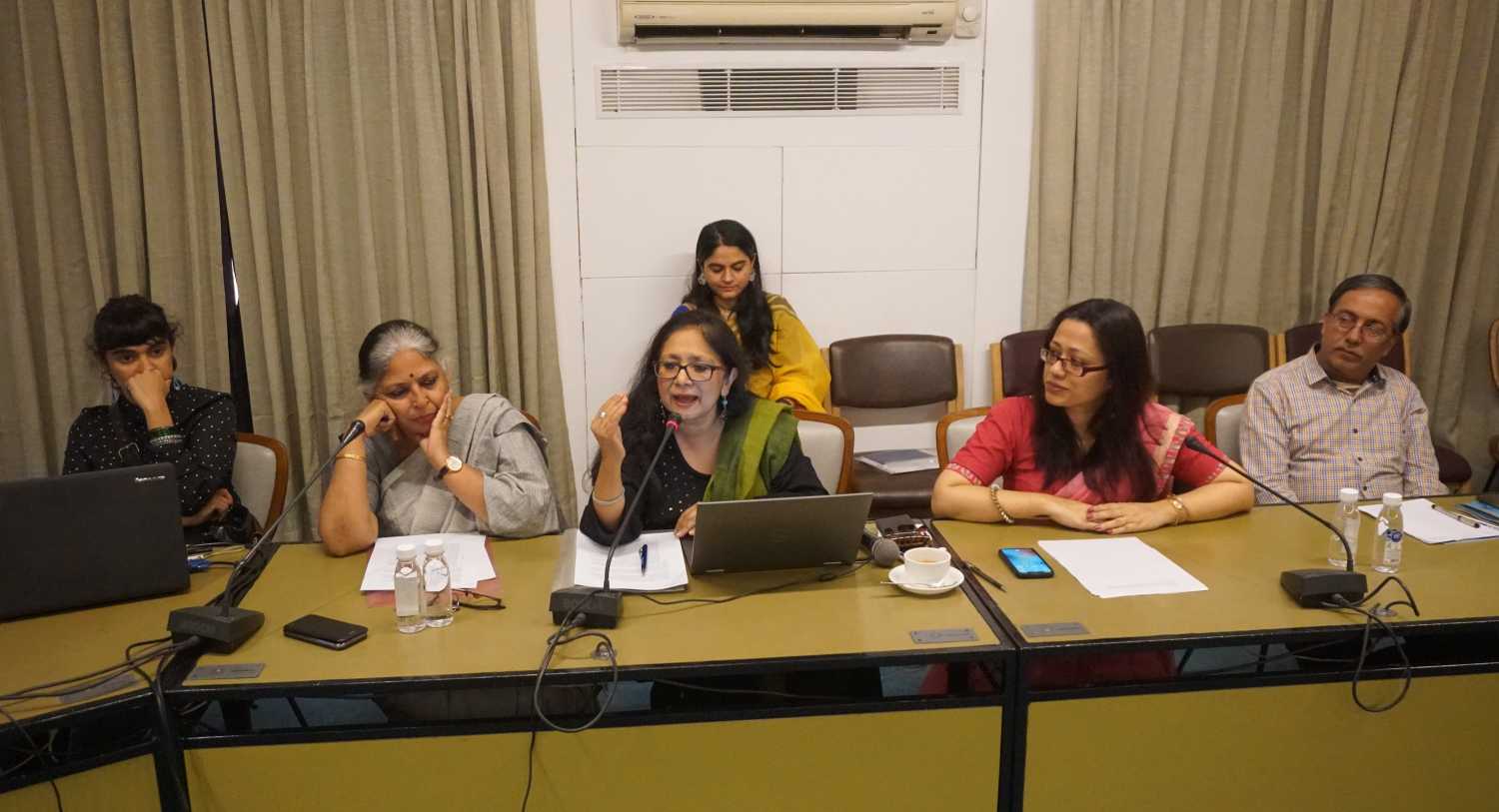 The four-hour roundtable tackled a series of questions related to the movement. The feminist linkages between the global and the local in #MeToo, the institutional undercurrents of the movement and their possible impact on reorganizing and reforming institutional practices were dealt with.

Discussions were also held on the efficacy of the Internal Complaints Committees (IIC) along with several members and representatives present. Questions of workspace cult and toxic masculinity and their propagation of harassment at workplaces was brought into question by several female reporters recounting various instances of such issues in the highly upper-caste, upper-class male dominated media and film industry.

Finally, the most significant issue was the space of the internet which made #MeToo possible, but what would be the possibilities of healing from the issue and its recollection. The internet is a charged ground which throws up issues but also renders them static by fixing identities of victimhood and culprit.

A lot of the discussion included recounting several case studies of sexual harassment from all over the country in the different media and film industries. The success of the movement so far in giving voice to the oppressed and the harassed, along with the extent of the impact and its possible failures due to systemic control by patriarchy nevertheless were extensively debated. From the urban, metropolitan scope and centre of #MeToo to the possibility of its impact – if any – in conflict zones and other non-metro centres, several narratives were shared and analysed to assess the breadth of the movement.

Exhaustive explanation of the legislation available on sexual harassment, the scope of the law and the legal options available, and the possible conflict between the legal route and #MeToo were contested. The complexity of the movement and the social impetus that it has had on lives of women and men internationally was borne testimony by the fact that the roundtable lasted an hour over its stipulated three-hour duration, and had brought to the fore even more questions and concerns than it started with.

However, what lasted throughout the conference and acted as the keystone of all discussion was the unsubdued and reinvigorating spirit of reconciliation, inclusiveness, transformation and desire for healing that channelled itself through the many concerns and conflicts exhaustively reflected upon.

The Asian Women’s Film Festival is being held from 5–7 March at the India International Centre in Delhi. The theme of the 15th edition is 'The Female Gaze'. The festival will screen over 50 films from 20 countries by female filmmakers in several formats, along with workshops, panels and an art installation.