The 6th edition of KPFF screened 41 films over four days, featuring a wide range of compelling stories from India and the Asian subcontinent.

“Resistance” translated from Protirodher Cinema from Bengali, is the keyword that spells out the people-centric ideology of the films screened at this festival every year. The 6th Kolkata People's Film Festival was held from 17-20 January this year.

The KPFF also holds screenings and interactive talk sessions with the makers whose films are screened once every month and also organizes workshops to instil in children from marginal spaces, an understanding and appreciation of cinema. Film screenings are also held and the discussions held after the screenings. It also brings out a well-edited brochure with articles and essays from eminent people in both English and Bengali.

The 6th edition of KPFF screened 41 films over four days, featuring a wide range of compelling stories from India and the Asian subcontinent. While selecting the films, the festival screening committee had in mind that the KPFF 2019 is happening at a time when the home-grown Fascists are at one of their historic highs and when the issue of demonising of migrants and criminalising/annihilating political dissent is on the rise in South Asia.

In Bengal too, the Hindu supremacists are vying for an increased political space as they lose out electorally on some of their older comfort zones. At the juncture of all of these, the KPFF is imagined as a space for renewed conversations for those committed to putting up cultural and political resistance and celebrating people's power. 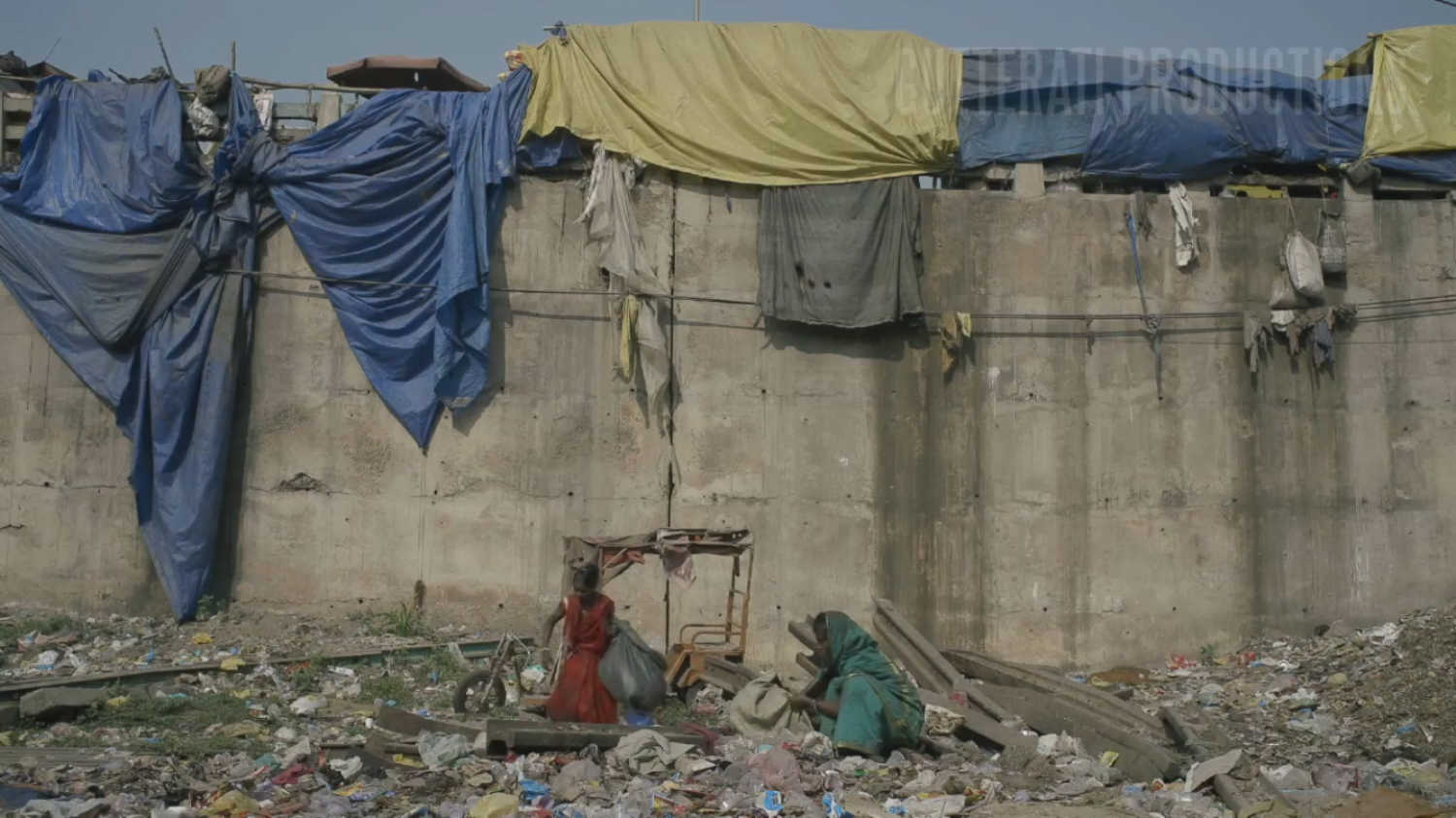 Anamika Haksar’s directorial debut after 40 years in theatre at the age of 59 in the name and style of Ghode Ko Jalebi Khilane Le Jaa Riya Hoon distances one from any kind of identification because it opens the underbelly of an old world you may have heard of but not really experienced in real life.

The complex treatment of viewer identification with the story, plot and characters involves not just a blend of different and often conflicting points of view, but also in the presentation of individual points of view in a more critical and contradictory manner. The camera keeps moving constantly as it closes up on clogged drains, or a girl sleeping on a huge waste land filled with white, blue and black plastic waste bags where we see her dreaming about mothers of growing daughters feeding them with delicacies, while the visuals overlap with black snakes in animation crawling right across the screen. We are witness to men fast asleep in every available corner and crevice under the open — vans, on the steps of a temporary barsati that can collapse any minute and the camera as if pokes fun at a suddenly animate figure of Goddess Lakshmi. The irony is subtle yet lucid. Is the Goddess making fun of the dreams of these slum dwellers? Or, is she really appearing in the dreams of these people? The corner of the red Communist flag comes and hits her in the face. She looks irritated at first and then goes back to her benign smile. 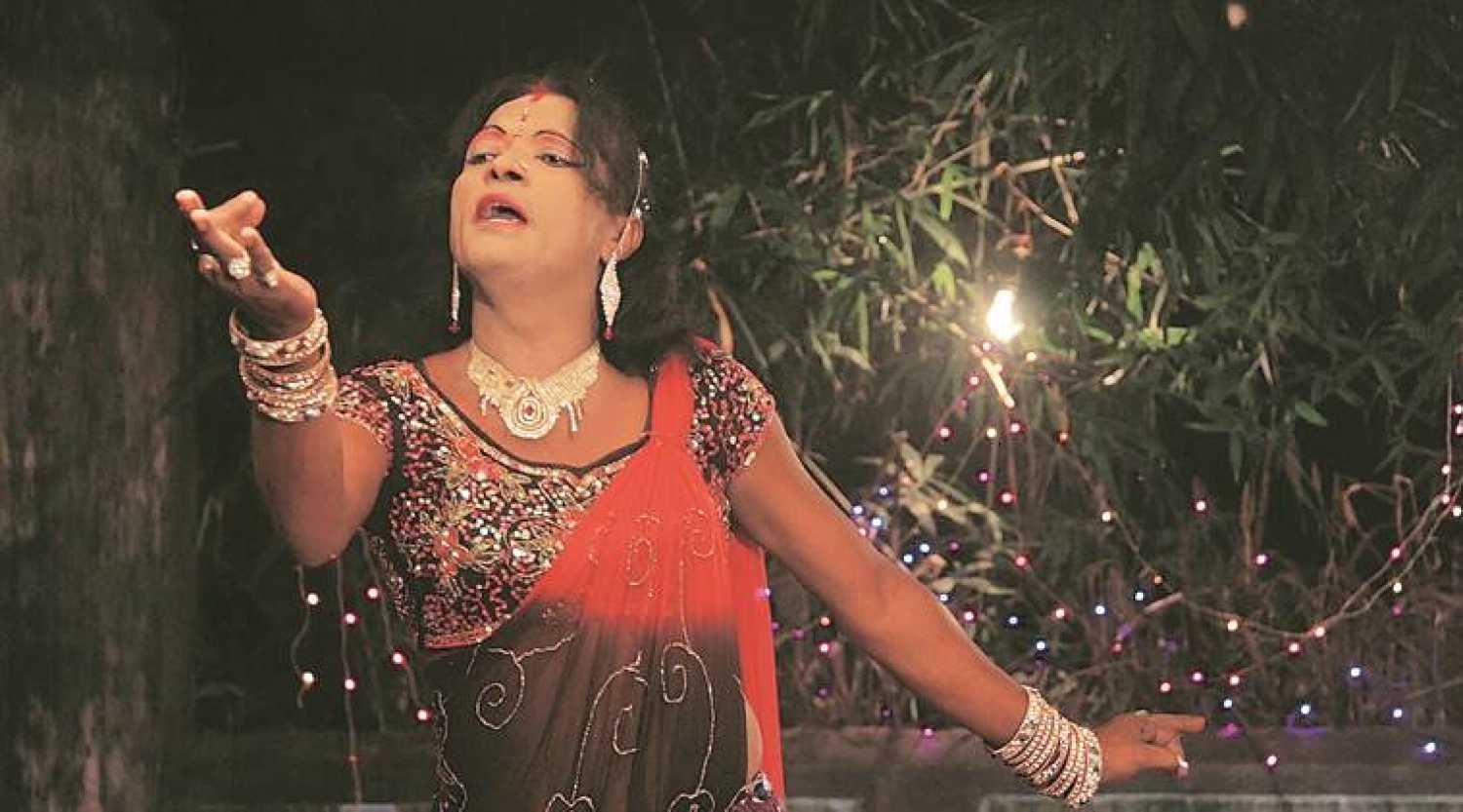 Naach is a form of traditional folk theatre from Bihar, India. In this tradition, male artists often cross dress as women on stage and are referred to as ‘laundas’. The most legendary name in this tradition is Bhikhari Thakur’s — who was an actor, playwright, and a social reformer popularly known as the ‘Shakespeare of Bhojpuri.’ Naach Bhikhari Naach follows the last four Naach performers to have worked him and creates a visual archive of his performance tradition. As they share their plays, songs and a lifetime of memories, they immerse us into the world of folk theatre where we begin to see a glimpse of budhau – the old man, himself.

Life of an Outcast 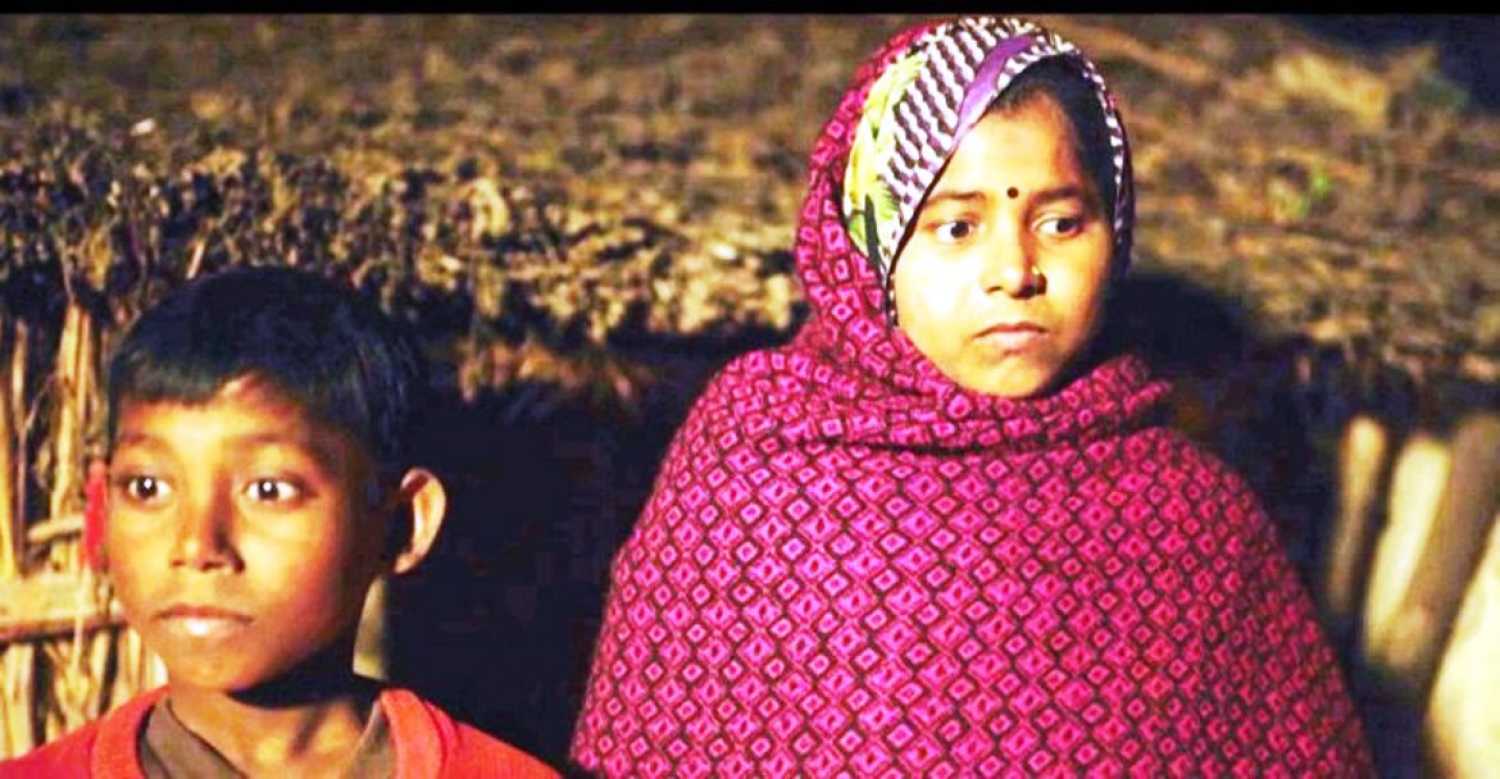 He said, “My film talks about two major issues that Dalits face in India – firstly the prevalence of caste system, and secondly the exclusion of some sections of our society in the development process.”

The film has a very slow pace which is intended to subtly underline the texture, form and content of torture and oppression that crosses generations of the same family. The cinematography is outstanding and so are the performances of the very few characters that people the film.

“As a person I strongly believe in social justice and unconditionally against any kind of discriminations so when it comes to films I believe that Indian cinema should be inclusive and it should include all the voices. In Indian cinema Dalits are marginalised so as a film maker I took it as my responsibility to raise their voice through cinema,” said Srivastava, who is not Dalit. 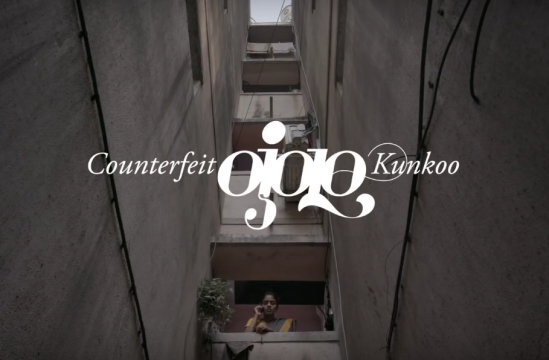 This is an outstanding film born of the real life experience of its maker, the young NRI Reema Sengupta who, while studying in London, learnt that her father gave her mother, his wife of 24 years, economically independent and well-known among the neighbourhood, a week to leave the house and find her own space. She uses the kunku – the dot the woman wears in the centre of her forehead – a sign of a married Hindu woman in India, to sharply point out how futile and hollow is this practice. 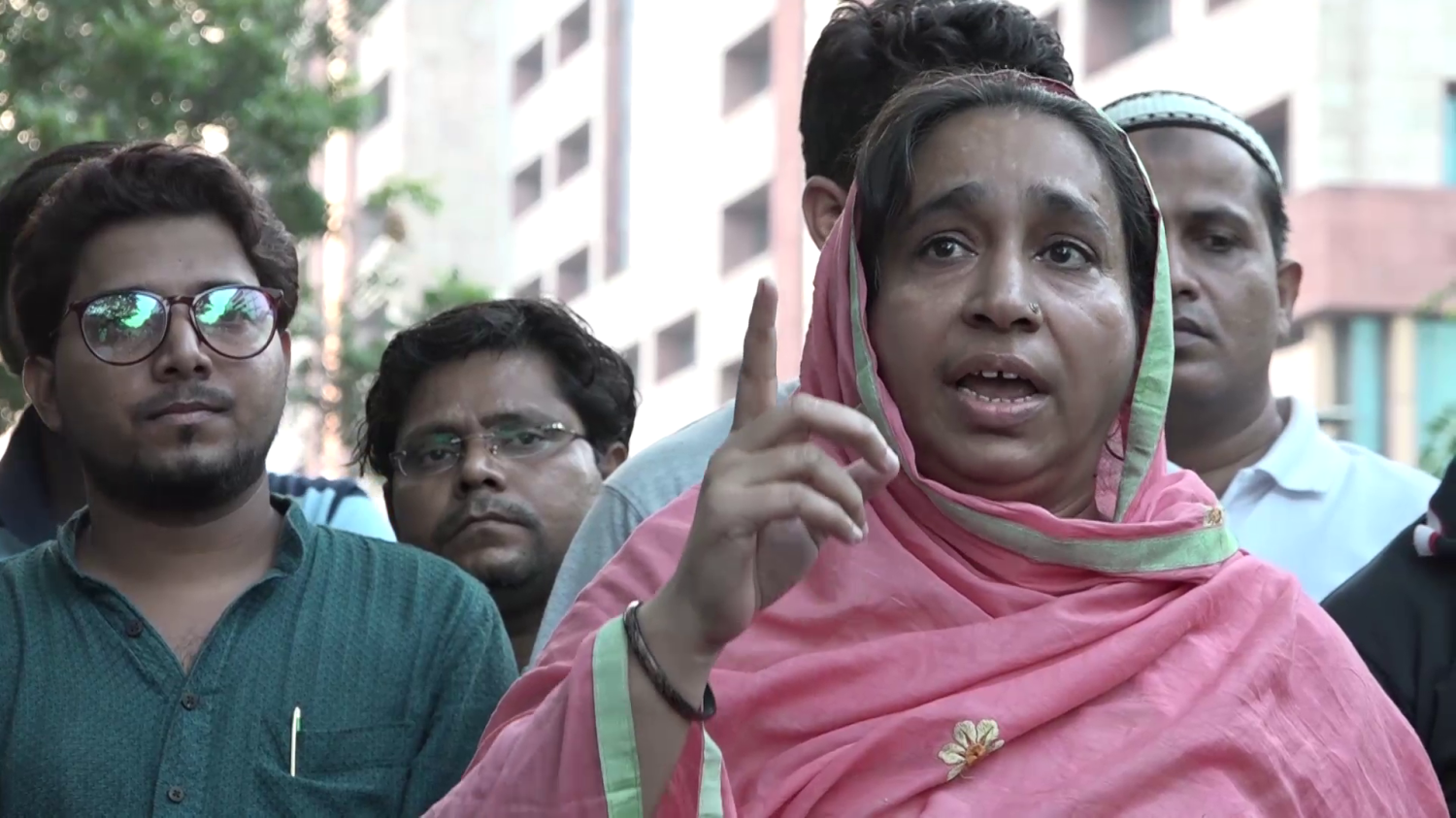 This is a much-discussed and extremely bold film that follows the journey of the mother of Najeeb, who went missing on 15 October 2016 from the Jawaharlal Nehru University campus, New Delhi, there has been no progress in the investigations by the various agencies investigating his disappearance.

Sunil Kumar, who directed the film with amazing live footage of the movement following the disappearance of Najeeb who was doing his post-graduation in bio-chemistry, said, “We began this journey by following the saffronisation of university campuses in North India. It was a predictable journey till we came across one lady, Ammi. As we spent more time with and got to know Ammi, the film became clearer to us. Her fight; her story had to be told. We began to focus on the story of Najeeb's disappearance, and the following inertia and final stagnation of the investigation into it, which only fuelled Ammi's conviction to see justice meted out to the perpetrators. She has now become Ammi to so many and is the backbone of the protests and fight to bring justice to her son.”

It is a mesmerising film where the live footage gives one the true picture of the absolute absence of official investigation into his disappearance.

We Have Not Come Here to Die 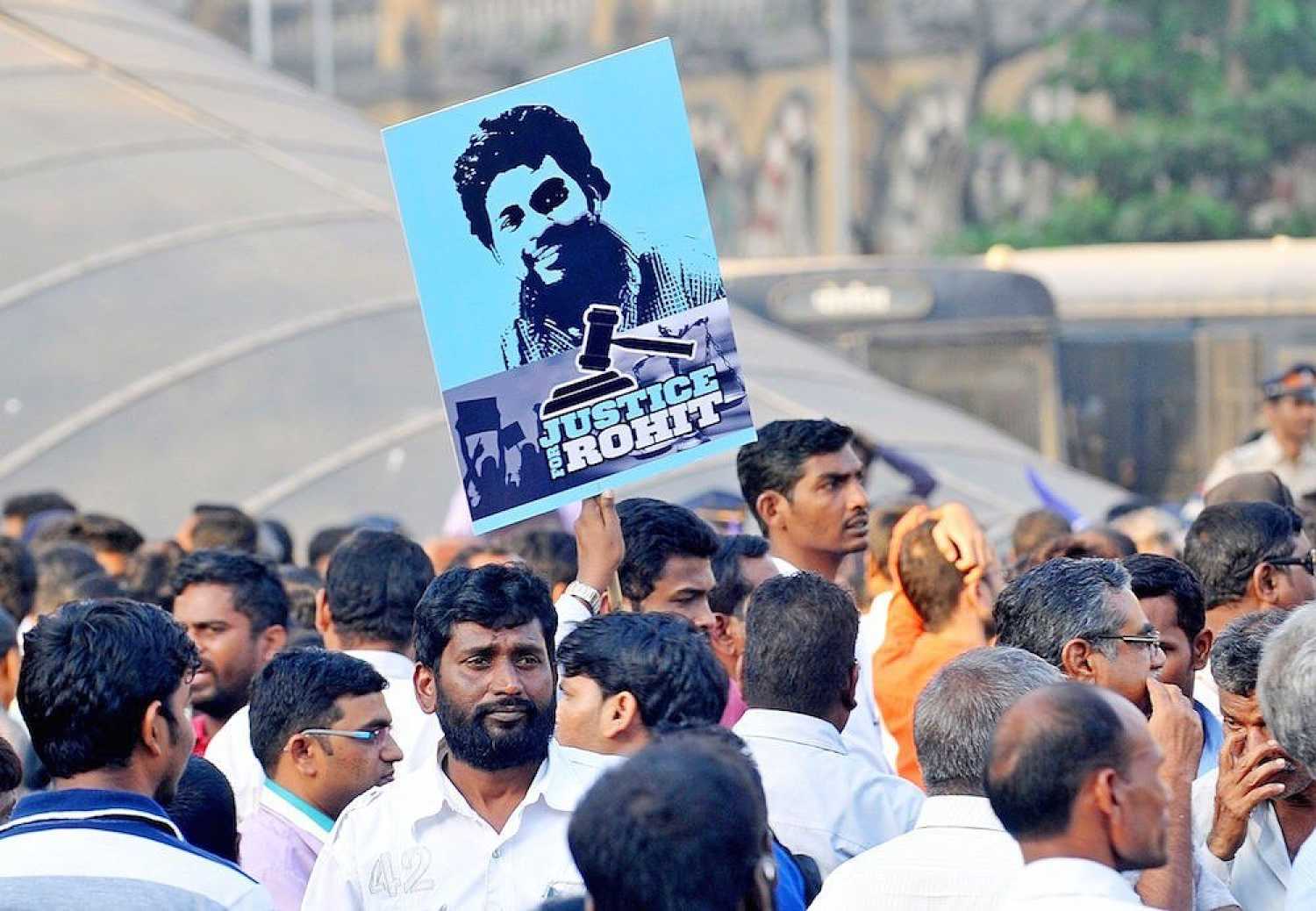 On 17 January 2016 a Dalit PhD research scholar, and activist Rohith Vemula, unable to bear the persecution from a partisan University administration and dominant caste Hindu supremacists hung himself in one of the most prestigious universities in India. His suicide note, which argued against the “value of a man being reduced to his immediate identity” galvanized student politics in India.

Based on the slow and steady uprising among the student community beginning at the JNU and spreading out across the country, noted documentary filmmaker Deepa Dhanraj has made a film following the aftermath of this death and the establishment’s total reluctance to hold an investigation of his death and what led to it.

Over the last year, thousands of students all over the country have broken the silence around their experiences of caste discrimination in Universities and have started a powerful anti-caste movement. The film attempts to track this historic movement that is changing the conversation on caste in India.

University campuses and cultural spaces keep refusing or backing out of events meant to memorialise Vemula’s life and work. In 2018, communities across the country decided to mark the date of Vemula’s demise with a screening of We Have Not Come Here to Die.

The Bengal Engineering College of Science objected to the screening of this film and also cancelled a retrospective of Mrinal Sen.

In Chennai, the Chennai Book Fair reportedly backed out of screening the documentary in a last minute decision made by the organisers. The University of Hyderabad, where Vemula studied (and was ostracised) has also taken some extensive measures to curtail any dissent on campus in the wake of Vemula’s death. Since Deepa was present for the after-screening discussion, this became one of the highlights for the full-house audience.