Priyaank Sharma and Riva Shukla
give your opinion

Priyaank and Riva will begin their journey in Ranchi, Jharkhand as the film goes on the floors in the state. Before they left, Priyaank and Riva spoke exclusively with Cinestaan.com in a freewheeling chat.

Through the course of the 20-odd minutes, the duo’s passion for cinema could be reflected in their eyes and flowed through their words. Priyaank longed to become an actor from an early age. At 15-16, his goal was to go to New York’s Lee Strasberg Theatre and Film. Riva went to The Acting Corps in Los Angeles and polished her skills in Naseeruddin Shah's theatre group.

Sab Kushal Mangal came like a bolt from the blue for the duo. However, the young actors feel they are ready to dive in.

Ask an Indian about his/her well-being and s/he would generally say 'sab kushal mangal'. But to the two of you this is not just three words, but right now it means the world to you. Is that right?

Priyaank: Absolutely. This has been my childhood dream. I have been chasing, working on it for quite some time. I have done a lot of workshops, did a course in filmmaking, acting at Lee Strasberg. I came back then assisted Rajkumar Santoshi on Phata Poster Nikhla Hero (2013). I have done a couple of scripting jobs as well. I have done plays. I have been waiting for this thing to happen, and it is finally happening now.

Riva: For me, this is going to be a very important quote in my life. I never personally said to anyone ‘sab kushal mangal hai’. I've often heard others say that. So, now this [film] has happened suddenly and now when the food is cooked well, we tell the maid, ‘sab kushal mangal hain’. This gave me a positive vibe about the entire idea of going ahead and doing this project.

What’s the story behind you guys landing this break? 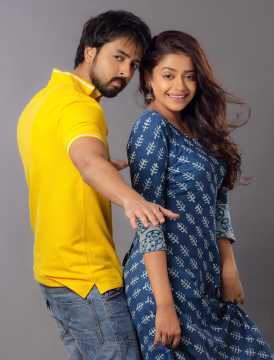 Priyaank: I got a call from the casting director. As soon as I heard the narration, I knew that this is the film, this is the character. The content is so strong and I could relate to it. It was a no-brainer for me. My parents also read the script and they agreed on the same. Later on, I came to know that Prachi [Manmohan] is producing the film. She is my school friend. How things come to a full circle... We hadn't touched base since Class 12.

Riva: I was in Los Angeles, doing an acting course. After that I moved to London, exploring the place, trying to do certain things over there. I had come here to visit the family. After a month I got a call from my father, that Moeen Baig uncle had called and he wants me to meet [producer] Nitin Manmohan sir. I didn’t understand what was going around. Dad told me to go there and hear the narration. I wasn’t seeing myself get into the industry so soon. This happened and there is no looking back.

Riva, were you aware that you were being offered the lead role?

No. I just couldn’t believe it. I didn’t expect to be doing a film with Priyaank, Akshay Khanna sir, what else could I have asked for?

Would you guys be able to tell a little bit about the film?

Priyaank: It is basically a situational comedy. It has romance in it as well. It is completely content driven and it has a lot of characters. My character is very loveable. I can relate to it. It's basically a family entertainer.

Priyaank, your mother was quoted saying that there is no filmi background then how did you develop that passion? Is it purely in the genes?

I have been kept away from all the parties, all the showsha. I guess that is what my mom meant when she spoke of the non-filmi background. We never had those parties at home. We have a lot of family friends who belong to the industry like Anil [Kapoor] uncle, David Dhawan uncle. Look half of the people [from the industry] don’t even know that I exist. When I used to meet people, some of them said, “oh, Padmini ji has a son”. I have been a movie buff since I was born. I have watched my mother and father’s films. So we had an atmosphere at home in the workspace.

I was doing dramatics in school but once I did my 10th, when I told my parents that I wanted to go to Lee Strasberg [acting school] that’s when it all started for me. My goal was Lee Strasberg [Theatre & Film Institute].

What was the environment in your house, Riva?

It was non-filmi, but there was a lot of nautanki in the house. Often I danced at every family gathering, parties, functions. Most people knew that Riva is going to put up a show. Some family member used to say, 'it may not be her birthday, but we are sure she will dance'.

Priyaank, the first time when you told your parents, you wanted to be an actor, what was their reaction?

They said, '‘It is a lot of work. It does look fancy, everything is all good about it, but the backend work is next level. So, if you are ready for that then go ahead'. I said yeah yeah, but now I realized that it is a lot of work.

Nepotism has now become a cliche, star kids have no pressure. But what is perhaps the concern for any actor, is that he/she shouldn’t come across as undercooked. You think you guys are ready to take the plunge or would further preparation, a few more years, would have helped?

Priyaank: I feel the learning process never stops. You can never be ready enough, but you have to take the plunge. You have to wait for the right moment. I think this is our right moment, and that’s why we have taken the plunge. Yes, nepotism is there in every industry. It has its advantages and disadvantages. The pressure is there because I am mom’s son, dad’s son. So, people expect more. If I deliver even 50-60% people will be critical towards me. As opposed to people coming from outside, they might just be judged on 10-15%, and critics would say, this guy has talent. You have to deal with it. You have to be true to yourself. You know have given your 200% and you go ahead. Later if nothing works, then you know that you tried your best.

Riva: I don’t take nepotism negatively. This might sound weird, but if this happened, we didn’t ask for it. So, let’s just live with it and take it positively. There cannot be a better blessing than that my father is an actor. It is in my blood. I can’t ask more. Yeah, but now I have to prove it is in my blood... [pauses] or not. [everyone in the room laughs].

Priyaank: I have seen it. She has it in her.

Priyaank, what memory do you have of Ravi Kishan ji?

He just did a film with my cousin Siddhant [Kapoor] in Bombairiya (2018). He too spoke highly of him. I've met him, and I think he is a wonderful person. He is just full of energy. He reminds me of my masa Shakti Kapoor. I call him Shakti papa. They are very similar to their energies. He is the life of the room.

Riva, have you watched Padmini ji’s film or ever met her before?

My father used to make us watch her films. Dad would like, 'See, this is how it is done. You have to learn from her'. When I met her recently, believe me, it was the humblest feeling I could ever get. Such a grounded lady. It makes you feel warm and homely. There are artistes who behave like heroines in their homes too, but she was completely opposite. She was like a beautiful mother. There’s a lot to learn from her.

The film’s cast on an online portal mentions Ravi ji and Padmini ji in the cast of the film. Do you get more conscious or having them around helps?

But hypothetically speaking if the film had both of them then would it have been easy for you both?

Priyaank: It wouldn't have been easy

Riva: It would have got doubly difficult for me.

Riva, you have been part of Naseeruddin Shah’s theatre group. Can you talk about your theatre experience?

I was doing a play called Parindo Ki Mehfil. So, I started working backstage. I had stayed away from the film industry. I’d hear tales from my father, but I hadn’t really been out. The theatre experience...[pauses] serve tea, hand over costumes, props. Heeba Shah [director] felt that this girl can do something. She then cast me in a role. I did the same play in two-three different places in Mumbai. The theatre is a different world. It has had added to, complimented whatever I have been doing now.