I said I'll do Badla if you give me the man's role: Taapsee Pannu


Taapsee Pannu talks about how her part in Badla was originally written for a man and changed to a woman when she said she would do the film only if offered that part.

From a young woman fighting for justice in the feminist courtroom drama Pink (2016) to the restrained lawyer taking on religious bias in Anubhav Sinha's Mulk (2018) and the feisty Rumi in Anurag Kashyap's Manmarziyaan (2018), Taapsee Pannu has shown a fair amount of versatility in the past three years.

Next, she will be taking on another challenging part in Sujoy Ghosh's murder mystery, Badla, alongside Amitabh Bachchan. Pannu plays Naina Sethi, a successful entrepreneur accused of her boyfriend's murder.

In an interview with Cinestaan.com, the actress spoke of how her role was originally written for a male character and why she does not get approached for glamorous roles in formula films. Excerpts:

In times when everything is instantly on social media, do you fear people might lose interest once they come to know who the killer is?

A lot of people raised this question when we decided to make this film. But tell me one thing. Generally when we watch a film we know that the girl and the boy are going to come together in the end. But how they will meet is the trick, right? In this film also it's not just about who has done it. Point is also how the person has done it.

How different is Badla from its original, the Spanish film The Invisible Guest?

He [Sujoy Ghosh] has filled up some loopholes. He completely dissected the film after watching it and asked a lot of questions. So he filled up those loopholes.

He has also made it very relatable to Indian audiences. You will see that when you watch the film. You will not feel like you are watching the same film.

Are you still intimidated by Amitabh Bachchan?

It happened when I did my first scene with him during Pink. After that I switched off that button because I can't work like that. This time it was just a continuity from Pink. We took off where we had left.

What did you think of the film and the role when you were approached for it?

How did the change happen?

When I was pitched the role nobody was locked, not even Sujoy actually. The producer Sunil Khetarpal was pitching it simultaneously to cast for different roles. So when he approached me to play the girlfriend's role, I said I'll do it, but if you give me the man's role. He said I'll think about it. So he discussed it, with, I don't really know who all.

So in the original my role was actually male and the lawyer's role (played by Bachchan) was a female part. But they had written both as male parts in the Badla script.

It adds a whole new dimension to the narrative, doesn't it?

Having a female character automatically adds more layers. And then because it is me and Mr Bachchan, the dynamics come into play. Since we have played lawyer and client before, they come already believing in that dynamic. 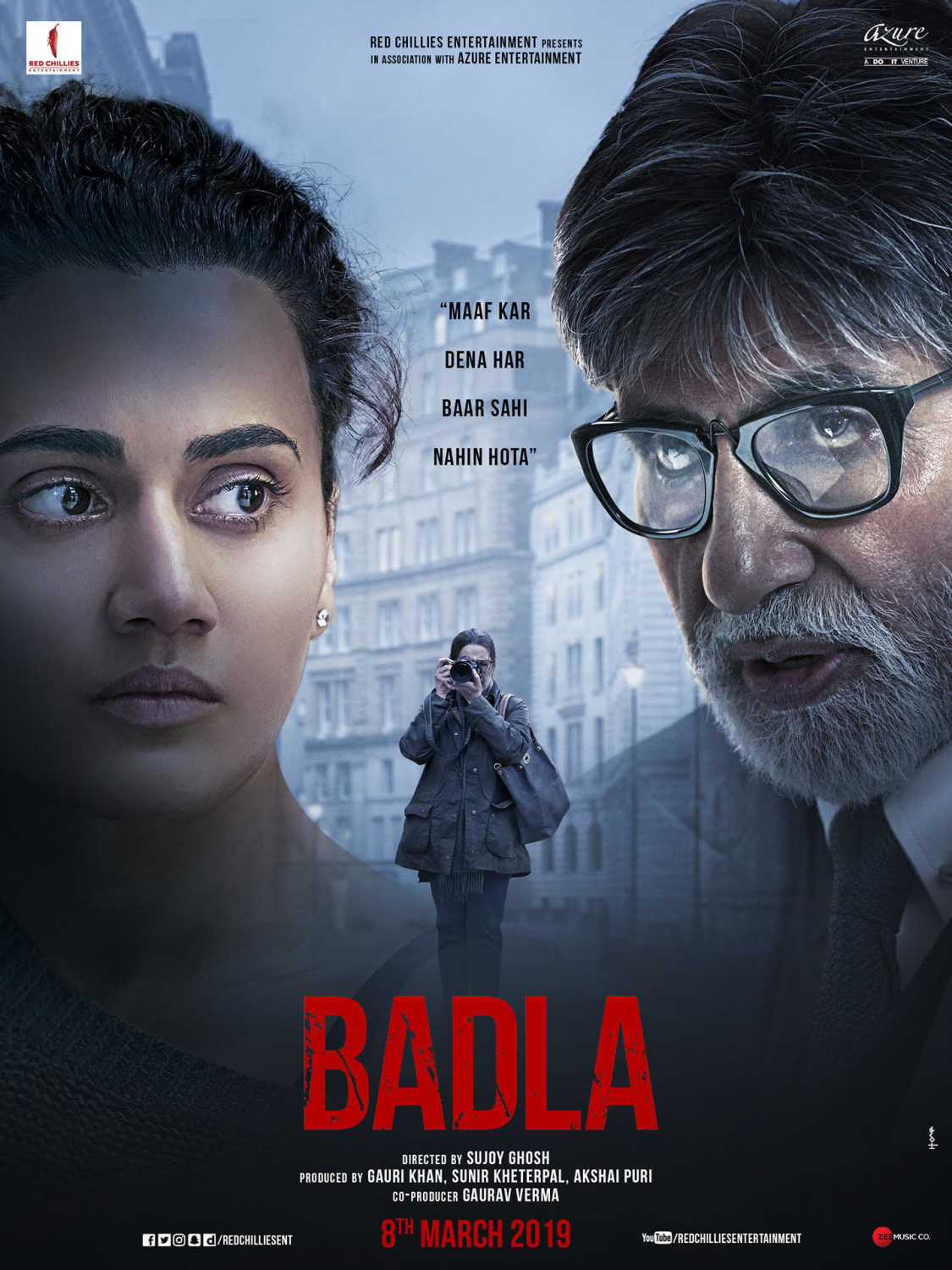 Will you do a mainstream entertainer like Judwaa 2 again?

But I should get offered a part like that, no? There is a huge queue of ladies who are much better than me for those roles. Someone really needs the foresight to cast me because I am not the obvious choice for such roles, which David Dhawan had two years back. Someone needs to make the decision to take me instead of the girls who are good in these kind of roles. If someone has that vision then I would love to do it.

While many actors get asked if they will do a content-driven film, you get asked about doing formula films...

I started my career [in Hindi cinema] with Chashme Baddoor (2013) and in the South also I did the more glamorous parts. It's not like I cannot do them. The girls who are really good at doing it are way too many and that's why it's a safer choice to take them. Somebody needs to feel that it would be something new and different to cast me.

Would you say Southern cinema didn't manage to tap into your potential?

It's not like that. Language is a big thing. I now know how much my language control helps me in getting good roles. Many people come to me with films because they know I have a good command of Hindi. And I am sure there are many actresses who don't get those roles because their Hindi is not very good. So it's the same reason why I didn't get those kind of roles in the South.

But now the story is very different. Now they approach me for some good roles.

Do you feel there is enough space for commercial and content-driven films to co-exist as Indian cinema evolves?

Right now they are. But which side the scales will tilt, I don't really know. Excess of anything is bad. If too many content-driven films come, the Indian audience will get exhausted. People also need light entertainers. If they only have brainless entertainers, people will complain that the industry makes only these kind of films. So I think it will be a good balance for quite some time.

As an artiste, what was the challenge for you in a murder mystery like Badla?

In these kind of films, every character has three to four layers, and they hold their cards close to their chest. Now, when they will reveal each of their cards you don't know. So it is very interesting when you open your card and how you move from one card to the other.

As an actor your transition from one layer to the other is very interesting. Like in Manmarziyaan, all the three-four layers of the character were shown in perhaps the same scene. Like you will see her anger, her laughter or being vulnerable at once.

In Badla, you will see only one layer at a time. How you seemlessly transition from one layer to the other shade is what is exciting to play as an actor. This is true of all the characters in the film.