Several top filmmakers used Utpal Dutt's craft and unforgettable screen presence in a variety of iconic roles. On his 90th birth anniversary (Dutt was born on 29 March 1929), we look at 10 of the great thespian's defining roles in Bengali and Hindi cinema.

Bengali cinema has always been known for producing some of India's finest character artistes. Some of them came from theatre while others brought in the new tradition of natural acting. However, few artistes have been equally brilliant on stage and on screen. Utpal Dutt and his protege, Rabi Ghose, are two of them.

One of India's tallest theatre personalities, Utpal Dutt proved his brilliance as an actor in leading roles in films as well. An active, conscious and revolutionary playwright and theatre director, Utpal Dutt played villainous, comical and intense characters with effortless finesse in both in Bengali and Hindi films.

When asked how he could mould himself into completely distinct avatars of such diversity, Dutt was once quoted as saying, “I have developed a technique of shutting my mind off, switching it off rather. I will not be able to tell you even the names of the films I have acted in or even the name of the character I have just finished shooting.”

Utpal Dutt was part of some legendary creations by legendary directors and turned his characters in those into timeless icons that have become part of our collective consciousness over the years.

Mrinal Sen's Bhuvan Shome ushered in the age of New Cinema with new techniques of storytelling and a novel cinematic language. Dutt in and as Bhuvan Shome delivered one of his most memorable performances in a character with a lot of self-reflexivity and grey shades.

Bhuvan Shome is a railway officer, very staunch about his duties and dead-set against corruption. Dutt gets into the skin of Shome as he magnifies his egoistic nature with a closed vision about life.

Shome is a bureaucrat who tries to impress command on people; however, when he gets out of his comfort zone and reaches a remote land for hunting, his vulnerabilities are laid bare. Neither his imposing personality nor his life experience is of any use when he comes across the village belle Gauri played by Suhashini Mulay.

In his failed attempt at hunting, when he dresses up as a local on Gauri's insistence, Bhuvan Shome could have been turned into an object of ridicule, but Utpal Dutt, with a consistent temperament, retained a rustic dignity in the character. He made it possible to essay Shome's transformation in the most convincing and realistic manner with subtle expressions and appropriate physical movements. 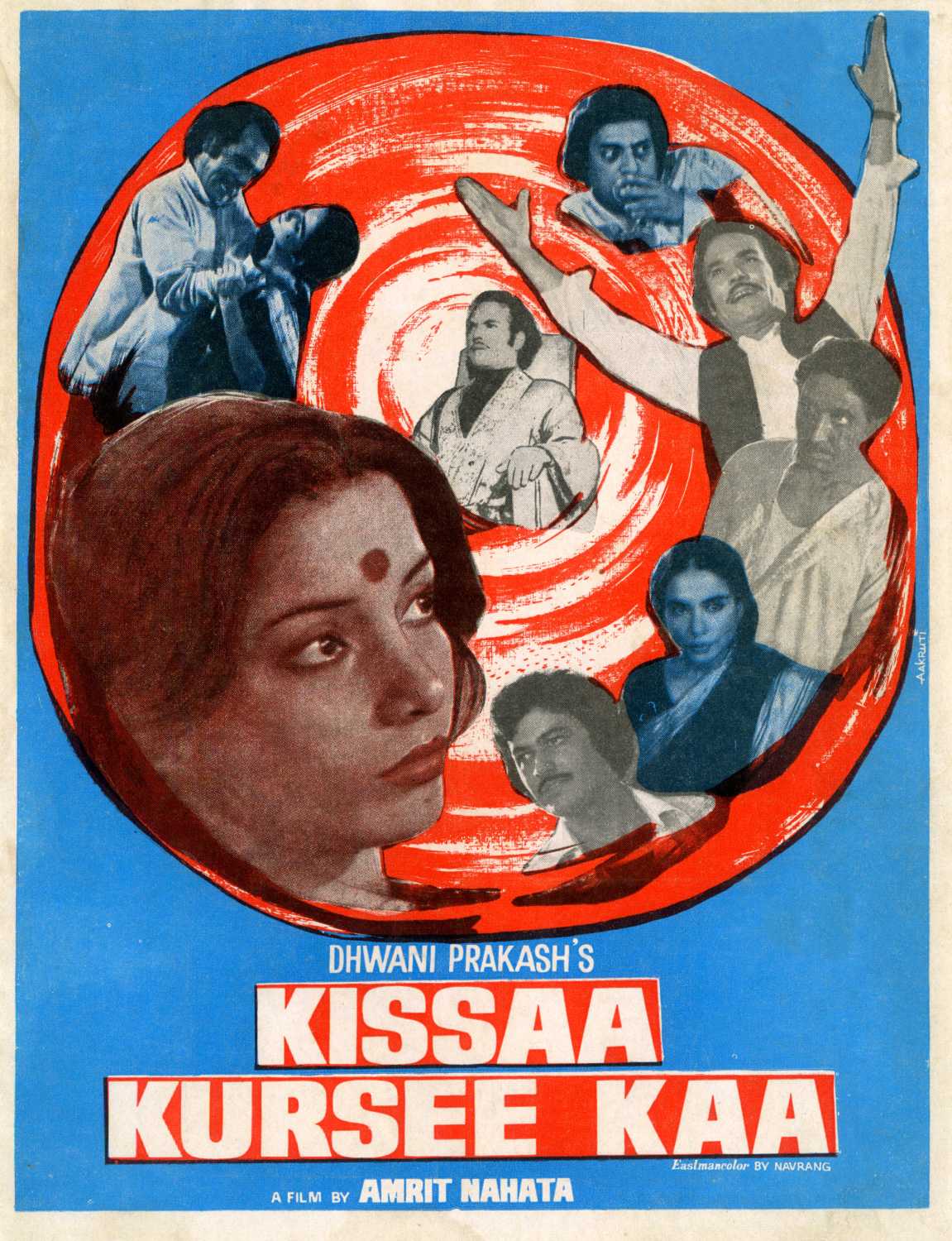 For someone who held strong and radical political opinions and even braved prison, Utpal Dutt often played a bumbling fool in Hindi cinema. Not always though. In Kissa Kursi Ka, he played the manipulative politician looking to keep his constituents under his thumb.

In Amrit Nahata's burning satire on the Emergency, Utpal Dutt played the villain with glee. Sadly, the Emergency ensured that not many people witnessed this performance. The censors refused to pass the film. So incensed was the ruling Congress government that it destroyed several prints of the film in secret, leading Nahata to file a case.

Yet, it was the coming together of names like Utpal Dutt and Shabana Azmi, artistes unafraid of voicing their political opinions, that made cinema back then so influential.

Utpal Dutt made his mark in this Feluda film, shining as the shrewd villain Maganlal Meghraj. A corrupt and powerful businessman, Maganlal is based in Banaras but has connections in Calcutta. And Ray knew no one could do justice to Maganlal better than the learned Dutt, who infused deviousness and manipulation while speaking in broken Bengali and approaching Feluda (Soumitra Chatterjee) to leave his investigation in the ancient city.

Maganlal is not overtly violent or directly threatening. He is sly and prefers to harm in silence. In the sequence where he invites Feluda, Topse and Lalmohan Ganguly to his house, Dutt, with his poignant facial expressions and required pauses in dialogue delivery created an aura of negativity around Maganlal even while treating his guests with utmost courtesy.

But slowly his character takes shape and Feluda knows Maganlal has invited them to create nothing but obstacles in his investigation. Utpal Dutt gradually built up that sequence, creating a tense atmosphere around his character without showing restlessness. Maganlal’s evil intentions hit the pinnacle when he heartily enjoys Arjun's knife-throwing at Lalmohan, while Lalmohan faints in shock and fear.

This was undoubtedly Utpal Dutt's most loved role in mainstream Hindi cinema. Hrishikesh Mukherjee's Gol Maal saw the actor play the starched eccentric, Bhavani Shankar, in style. From his chemistry with Amol Palekar to the 'eesh' that became a signature, it was impossible to take your eyes off the actor on screen and this remains one of his most popular performances.

From Bhavani Shankar's eccentricities to the bristling anger and trademark moustache, Utpal Dutt was a far cry from his statesmanlike presence in a Satyajit Ray or Mrinal Sen film.

Despite the many characters in the film that have become immortal, it is Bhavani Shankar who defines it for the audience with his "moustache is the mirror of a man's soul". Odd, funny, and unforgettable!

The film won him the Filmfare award for Best Comedian.

Most popular films of Utpal Dutt don’t need any introduction and Hirak Rajar Deshe by Satyajit Ray is undoubtedly one of them. Dutt played the tyrannical king of the land of diamonds. His treasury is filled with riches while his subjects starve. His scientist invents a brain-washing machine and the Hirak raja uses it to turn everyone to his side, leaving the teacher Udayan (Soumitra Chatterjee), who spreads education to raise awareness.

While Dutt’s physical features perfectly suited the role of the tyrannical Hirak raja, his theatrics brought the character alive with the attributes of cruelty and megalomania. Dutt excelled in delivering the rhymed dialogues with expressions that often invoked terror and ridicule at the same time.

Dutt's performance as a villain in other films was such that the audience could not help but end up hating the character. However, the way Dutt played Hirak raja, the character always retained the fantastic essence of the story, not turning grim for a single moment. Also, Dutt’s transformation at the end proved his depth as a performing artiste.

Dutt shared a great rapport with Hrishikesh Mukherjee, which was evident in the kind of roles the director offered the actor. Another comedy of errors, Naram Garam, saw Dutt take on the role of an ageing landlord who falls in love with a young woman whom his son is also in love with.

While actors often avoid roles that portray them as the fool, the Shakespearean actor in Dutt often chose roles that tapped into this very Falstaffian sentiment.

Even with Shatrughan Sinha, Amol Palekar and Swaroop Sampat comprising the rest of the main cast, Dutt's comic timing stole the show.

The role won him another Filmfare award for Best Comedian.

While he was often typecast in the mould of the strict patriarch, Utpal Dutt would also occasionally choose scripts that veered off the course. Basu Chatterjee's Shaukeen was one such project.

A Zindagi Na Milegi Dobara for seniors, the film saw Utpal Dutt take on the role of a gruff middle-aged conservative man pulled into an adventure by his more extravagant friends, Ashok Kumar and AK Hangal. The film certainly made for an interesting addition to Dutt's iconic filmography.

This little known film brought together two unlikely artistes in Utpal Dutt and Anil Kapoor, who went on to become a full-blown commercial star.

Saaheb was a touching tale about a young man finding his way through life. Utpal Dutt played the gruff father who is tired of his wayward son's playful ways, only to find that the latter's great sacrifice saves the family.

Dutt brought both stature and a touching vulnerability to his role that only proved his control over the craft.

Made just a year before Satyajit Ray’s death, Agantuk is often considered to be an autobiographical work by the filmmaker. To speak of his ideas and philosophical outlook, Ray chose none other than Utpal Dutt, an illustrious artiste himself.

Dutt played Manmohan Mitra, who claims to have roamed the world for 35 years. When he passes through India, he decides to land up at Anila’s home in Kolkata. Manmohan Mitra is apparently a long-lost uncle of Anila played by Mamata Shankar.

Dutt not only lent the character the necessary attributes of a gentleman with good taste, behaviour and humour, but he also created an air of mystery around him with a perfection that continues to intrigue audiences about his identity till the end of the film.

As Dutt narrates his experiences of adventure and sudden realizations, his expressions are so genuine that the audience cannot help but feel an admiration for the character. At the same time, his subtle hopelessness in being continuously doubted and disdained by Anila’s husband and his friend and his carefully hidden sorrow and pity for the non-believers brings out the layers of messages that Ray wanted to convey through the film.

Like in all his other films, Utpal Dutt’s commanding screen presence kept the audience hooked till the end of the philosophical film.

When it came to playing influential characters with energy and drama, no one could do it better than Utpal Dutt. In Goutam Ghosh’s Padma Nadir Majhi, an Indo-Bangladeshi joint venture, Dutt played Hossain Miya, who dreams of building a Utopian community on his island Moynadeep.

Hossain Miya has a flourishing business on the island and he pushes people, irrespective of religion, to go there after Partition in 1947. Dutt, here, played a larger-than-life character with his magnetic screen presence. Hossain Miya sometimes appears shrewd, at other times possessed by his ideas.