Filmfare at 65: Recalling bizarre selections, omissions and everything in between


Award nominations often have surprise inclusions and omissions. As Filmfare turns 65 this year, we look back at some shocking misses in the Best Film and Best Music categories in recent years.

For an industry that produces the largest number of films annually, you would expect tough competition at the box office as well as for top honours. However, only a handful of Hindi films actually do well commercially while the many awards often trigger debates over their nominations and winners.

Granted that award selections are often subjective, but there are still blatant omissions or inclusions that tend to polarize opinions of cinegoers.

The name was later changed to the Filmfare awards after the Times group film magazine Filmfare. On 21 March 2019, Filmfare awards completes 65 years. The awards were not held for two years — 1975 and 1986.

Filmfare has its own system to draw nominations, which also includes an audience poll. Could this polling be blamed for some dubious nominations? An award's credibility certainly comes into question when merit is not honoured. For instance, 2017 saw films like Alankrita Shrivastava’s Lipstick Under My Burkha, India's Oscar entry Newton, and Shankar Raman’s Gurgaon fail to get nominations in the Best Film category.

Every year the awards are held in the first quarter of the calendar year and films released in the previous year are eligible for nominations. With this year's award function slated to be held on 23 March, we look at some glaring misses in the Best Film and Best Music categories in the past two years. 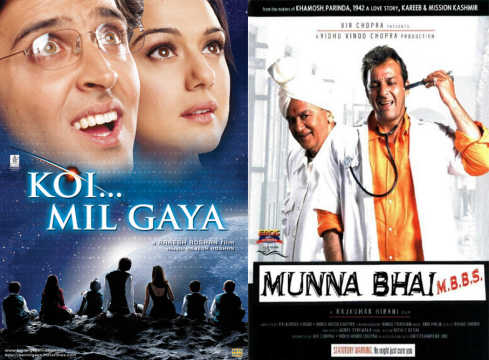 Koi... Mil Gaya, Baghban, Kal Ho Naa Ho, Munna Bhai MBBS, and Tere Naam were fine films in their own right, each catering to its own audience. Rajkumar Hirani’s directorial debut Munna Bhai MBBS had a refreshing story about a criminal with the proverbial heart of gold who wants fulfil his father's dream of seeing him as a doctor. Given its universal yet novel theme and brilliant acting, Munna Bhai MBBS was touted as a strong contender for the top prize, but lost out to the popular Koi... Mil Gaya, starring the rising star Hrithik Roshan.

Director Rakesh Roshan’s Koi... Mil Gaya was the first Indian sci-fi film to feature alien characters, but beyond that there was nothing special about the story. It had family appeal, but then so did Munnabhai. The year 2003 wasn’t the best in terms of quality for Hindi films, but Munna Bhai MBBS losing out to Koi... Mil Gaya remains a bitter pill. 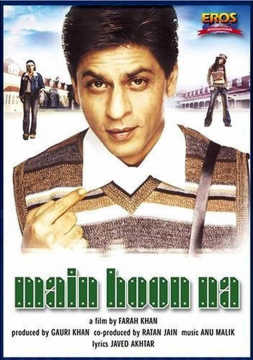 Films with dark themes often fall by the wayside at awards such as Filmfare, so perhaps the snub to Vishal Bhardwaj’s Macbeth adaptation Maqbool was understandable. But what was wrong with Farhan Akhtar's coming-of-age drama Lakshya? Mani Ratnam’s Yuva, too, was liked by audience and critics alike. Interestingly, Yuva bagged the award for Best Screenplay but failed to make the cut for Best Film.

These exclusions didn't raise eyebrows as much as the selection of Shah Rukh Khan-starrer Main Hoon Na did. Farah Khan’s directorial debut had its fun moments, but was it worthy of a Best Film nomination? Thankfully, Best Film went to another Shah Rukh project that year, the more deserving Veer-Zaara. 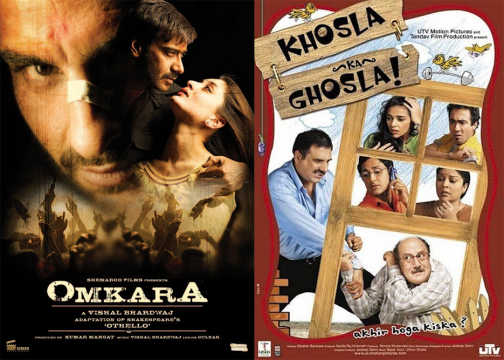 Aamir Khan’s Rang De Basanti swept most popular awards this year. Rajkumar Hirani was unlucky to miss out again with Lage Raho Munna Bhai. In the Best Film category, there was no place for Vishal Bhardwaj’s Omkara (an adaptation of Shakespeare’s Othello, another dark tale) and also for Dibakar Banerjee’s rib-tickler Khosla Ka Ghosla!. The latter had a refreshing tale that brought out the true flavour of the national capital region of Delhi even as it dealt with the real problem of land-grabbing. 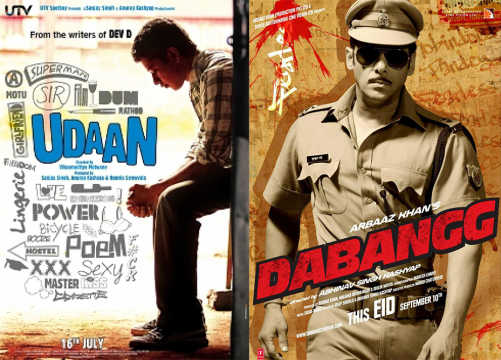 Dabangg was a highly entertaining film and, for a change, Salman Khan even gained some respect from the critics. However, Vikramaditya Motwane’s emotionally gripping tale of a father-son relationship appealed to the senses. Karan Johar, who bagged the Best Director award for My Name Is Khan, was also nominated, and had later admitted that Udaan was perhaps the better film. Udaan picked up seven awards, including Best Film (Critics), but missed out on the big Best Film prize to Dabangg. Aamir Khan’s Peepli (Live), another fine film, picked up zero honours.

It’s rare to find a film that strikes such a deep chord. Neeraj Ghaywan’s Masaan showcased the caste system while making a subtle point about its futility. The film got international acclaim but was ignored on Indian soil. The competition was tough in 2015 with Bajirao Mastani, Tevar, Piku, Bajrangi Bhaijaan, and Tanu Weds Manu Returns vying for Best Film honours. But the sheer impact of Masaan's story and its flawless performances made it one of the finest films of the new millennium. Not for the Filmfare jury though. Masaan even missed out on the Critics award to Shoojit Sircar’s Piku.

The year 2000 was when Hrithik Roshan burst on to the movie scene. Someone known till then just as actor-director Rakesh Roshan’s son turned into an overnight star with Kaho Naa... Pyaar Hai. This year Kaho Naa... Pyaar Hai was a favourite for the Best Film award, but did Rajesh Roshan deserve the award for Best Music? We think not.

Composer Anu Malik came up with fabulous, original work for Refugee. Javed Akhtar wrote six beautiful tracks, of which 'Panchhi Nadiya Pawan Ke' got him the Best Lyrics award. But it was shocking to not find Refugee even in the nominations for Best Music. Among the nominations that year, Mohabbatein had memorable music, but the same cannot be said about Josh, Dhadkan or Fiza. Unsurprisingly, Malik won the National award for Refugee's music.

The year 2001 had some good Hindi film albums. AR Rahman’s Lagaan, Uttam Singh’s Gadar: Ek Prem Katha, Jatin-Lalit’s Kabhi Khushi Kabhie Gham..., Shankar-Ehsaan-Loy’s Dil Chahta Hai, and Anu Malik’s Mujhe Kucch Kehna Hai were decent. All five deserved the Best Music nomination, but the winner is still debatable. While Rahman's Lagaan album had a few inspirational and romantic songs, it was Shankar-Ehsaan-Loy’s Dil Chahta Hai album that came as a breath of fresh air and had more lasting impact. The film's story, characters' looks, and cinemaography made DCH a cult classic. The six songs of the film remain hummable and populr even today.

Shankar-Ehsaan-Loy charmed listeners with their variety on Karan Johar’s Kal Ho Naa Ho film album. However, there were better albums on offer that year. The duo of Vishal Dadlani and Shekhar Ravjiani had shown promise with the romantic music of Pyaar Mein Kabhi Kabhi (1999), but they truly arrived with the eclectic score of Jhankaar Beats. They produced some fine compositions, most notably 'Tu Aashiqui Hai', 'Tera Muskurana', and 'Suno Na'. It may not have ticked the traditional boxes as an album, but then neither did LOC: Kargil and Koi... Mil Gaya have all-around great music. Indeed, LOC: Kargil was a bizarre selection over Jhankaar Beats.

Anu Malik was unlucky that Refugee (2000) didn’t get a nomination, but was Filmfare trying to make amends by giving him an award for Main Hoon Na? Surprisingly, it came at the cost of the favourite and Madan Mohan swansong Veer-Zaara. The late music director's compositions were revived through 11 soulful songs by his son Sanjeev Kohli. These were penned by Javed Akhtar. The album brought together Jagjit Singh, Lata Mangeshkar, Udit Narayan, Sonu Nigam and Punjabi singer Gurdas Mann. 'Tere Liye', 'Main Yahan Hoon', 'Do Pal' were captivating ballads while 'Yeh Hum Aa Gaye Hain Kahan' was a romantic delight.

Interestingly, Main Hoon Na had just one track in the Best Lyrics category, while Veer-Zaara had three. Javed Akhtar picked up the award for 'Tere Liye'. AR Rahman’s Swades also had fine music that year, but Rahman would not mind losing to Madan Mohan. However, Best Music for Main Hoon Na left everyone bemused.

The competition was fierce in 2007 among film music composers. The best Hindi film albums rightly made it to the nominations, but the winner could have been different. AR Rahman’s Guru had a few riveting tracks, especially 'Tere Bina'. However, Pritam produced what was then his finest work in Imtiaz Ali’s Jab We Met. Irshad Kamil emerged as the new hope for the dying breed of exemplary lyric writers. Mohit Chauhan had just one track 'Tum Se Hi' in the Best Lyrics category, though the whole Jab We Met album has become a timeless classic today. Sandesh Shandilya had composed the lilting 'Aaoge Jab Tum' song that was crooned by Ustad Rashid Khan, but it got no honours or mentions.

Vishal-Shekhar also produced a couple of breathtaking tracks for Om Shanti Om — 'Ajab Si' and 'Main Agar Kahoon'. The contest was fierce, but Jab We Met should have won.