Is Sairat's Rinku Rajguru playing a politician in her next, Kaagar?


While nothing is known about the story of Kaagar, new posters released on social media give some idea about Rinku Rajguru's character.

The wait for Rinku Rajguru’s next movie, Kaagar, after the remarkable success of her debut film Sairat (2016) has been quite long.

Directed by Makarand Mane, the release of the film has been delayed. It was supposed to be released on 14 February, but the makers decided against it because of Rajguru's 12th standard board exams.

While nothing is known about the story of Kaagar, new posters released on social media give some idea about Rajguru's character. It looks like she is playing a politician in the film. This is interesting as few actors as young as Rajguru are seen playing politicians on screen.

Rajguru looks beautiful as well as confident in the pictures. She is wearing a staid saree and high-neck blouse. Her body language speaks more about her character. In the background, we can see hoardings with her photo and a crowd of possible supporters.

A video of Rajguru shooting a dance number for the film had gone viral last year. The rest of the cast members have not been revealed yet.

Mane had made his debut with the highly acclaimed Ringan (2017), which featured Shashank Shende and Sahil Joshi. He came up with Youngraad (2018) later. 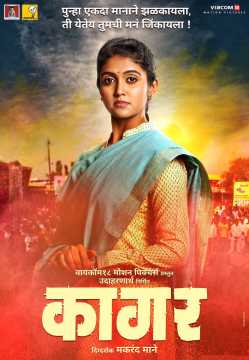