Shyam Benegal's Mammo: A humane document on the fallout of Partition


Mammo, which was released on this day 25 years ago, took the bold step of questioning Partition and its decimation of the Indian family and dwelt more on the psychological impact of the cataclysm than on the event itself.

Surekha Sikri and Farida Jalal in Mammo (1994)
give your opinion

There have been dozens of films on Partition and its impact on the lives of individuals forced to migrate to a country that never existed in reality or in their experience. Garm Hawa (1973) was the first feature of MS Sathyu. The film was controversial from its inception, as it was the first to deal with the human consequences of Partition.

This action, ordered by Lord Louis Mountbatten, the last British viceroy of India, split the country into religious coalitions, with India remaining largely Hindu and the new country, Pakistan, serving as a refuge for Muslims.

But is ‘refuge’ the right word for Muslims who did not wish to go to Pakistan? Would they be accepted socially and economically by the original residents of the newly formed country? 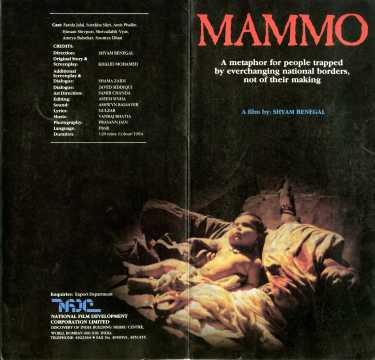 Mammo, released on 8 June 1994, was very different and dealt more with the psychological impact on Mehmooda Begum (Farida Jalal) who refuses to live in Pakistan than with Partition itself. Shyam Benegal, through this emotionally enriching treatise, revives one’s faith in cinema, taking the bold step of questioning Partition and its decimation of the Indian family, even in retrospect. But that is not its only virtue.

Mammo also offers a child’s perspective of the impact of Partition on a great-aunt who is determined to stay back in India but is forced to leave. Riyaz (Amit Phalke), all of 13, does not identify with her problem but is intrigued enough by it and begins to understand the pathos as he grows up.

Riyaz’s boyhood is filled with references to Beethoven, Faiz, Gibran and films like Psycho (1960), Bobby (1973) and Garm Hawa. The film is not without some humorous touches. The boy and his friends watch adult movies clad in burqas 'borrowed' from the two old ladies, and the boy thrives in his knowledge of Kahlil Gibran, his understanding of Garm Hawa, and sometimes treats his classmates with an acquired, pseudo-intellectual air of amused tolerance.

The film also explores the pain of the alienation of a woman when she is widowed in a land that she can never consider home. It is about the reunion of sisters divided by Partition. It is also about loneliness and old age and the strong resources that are inherent in a woman, resources that she can draw upon when she needs to.

Though Mammo was born in Panipat (in undivided Punjab, now in Haryana) during the British Raj, she was one of thousands of Muslims who left for Pakistan after Partition. She and her husband automatically became Pakistani citizens. Though childless, her marriage is a happy one, until her husband's death. Then she is thrown out by her husband’s family to strip her of her property.

Mammo comes to stay with her older sister Fayyuzi Begum (Surekha Sikri) on a temporary visa which never gets extended because of the laziness of the officials concerned on the one hand and corruption in the police force on the other. Then, one day, the law descends upon her and packs her off to Pakistan.

Mammo is a woman in her fifties who suddenly arrives from Pakistan at her sister's place in Bombay (now Mumbai). She builds up a strong bond of affection with Fayyuzi's orphaned grandson Riyaz. Riyaz has an unfeeling father tucked away somewhere, who has remarried, unknown to his son.

The narrative has a parallel theme that unfolds the growth of an adolescent schoolboy who is hung up on films and wants to become a writer. True to the nature of a teenager, he often hates his great-aunt's 'needless' intrusion into his private space, yet is delighted when she asks for a puff of his clandestinely smoked cigarette.

Mammo herself is a bundle of fun and forthrightness, which sometimes creates problems for everyone around. She is different from other middle-aged women. Her weakness is her brutal forthrightness on the one hand and her total involvement in other people's worries on the other.

But this is also her strong point. She evokes the wrath of her sister's grandson, the film-crazy boy, by springing a surprise birthday party for him, but she also helps out the battered domestic help by beating up her alcoholic, wife-beater of a husband. She questions her affluent sister’s appropriation of her and their older sister’s portion of the family wealth. Finally, when she is dragged away from her sister's and put into a train chugging away to Pakistan, her anguish is something we can identify with because, by then, we are absolutely on her side.

Since she is packed off cruelly to a country that is still 'foreign' to her, because she has overstayed her visa, Mammo arrives many years later and, this time round, legalizes her stay by having the strapping young grand-nephew register a certificate of her 'death' in India. They cannot send her off ever again.

Against the backdrop of post-Partition Mumbai, Mammo stands out in its open emotional bias for the love of one's ethnic roots. Benegal's no-nonsense, unpretentious and honest approach towards the pathetic story of a woman's life truncated by Partition is told well, sans embellishment of song or any melodramatic twist. A beautiful ghazal written by Gulzar and sung by Jagjit Singh enriches the film's tapestry every time it comes floating on the soundtrack.

Benegal took a radical step by eliminating male characters from the film except in very brief cameos and the wonder is that you do not even realize this while watching the film.

The Muslim ethos is brought out without any hint of self-consciousness. Since film critic Khalid Mohamed is credited with the story and the script, the analogies to cinema hark back to autobiographical touches, such as the reference to Alfred Hitchcock's Psycho, which created its own history, the small boy taking the two women along for a show of Garm Hawa, his running away when he learns that his father is alive but the reality has been hidden from him for so long. When the father dismisses him with a cheque for a paltry sum which arrives by post, the boy comes to terms with his grandmother's plight and makes his peace, with her and with himself.

Through small incidents that build up a strong storyline, weaving the two parallel threads of two generations, distanced by a third between them, together, Benegal defines his own statement about two old women and an adolescent boy. Not once does the film overwhelm us with any kind of connotative suggestiveness, except for the clippings from Garm Hawa interspersed as the trio are watching the film, which does seem a bit trite but goes with the general mood of the film. Nor does the director bombard us with interpretative mayhem.

He is aided all along by a powerful cast, led by Farida Jalal in the title role of Mammo, who offers a performance worthy of awards. Surekha Sikri as the older woman bagged the National award for Best Supporting Actress and is just as brilliant. The young boy Amit Phalke, too, invests the character with the right blend of naiveté and precociousness which comes from having to 'man' a family dominated by two old women.

The film is no aesthetic miracle. Benegal made a better aesthetic statement in his best film to date, Suraj Ka Satvan Ghoda (1993). But Mammo is different. The film gains enormously by dint of the director's skill and imagination to make objects, places, and their entire past world palpable to the audience.