Nutan, the best and most versatile of them all: Birth anniversary special


Nutan was a bona fide movie star, but she wore her stardom lightly and never shied away from trying different genres or taking up and excelling at some challenging roles.

Even after she attained fame with her sterling performance in Amiya Chakravarty’s classic Seema (1955), Nutan never wore her stardom on her sleeve. At parties and functions, she did not wear any makeup and would be draped in an ordinary sari worn over a contrasting blouse.

Nutan wore spectacles and had very ordinary looks, but no one could call her ugly by any stretch of the imagination, with such sharply etched features. It was her lovely voice that gave her away, however. So, one can't really fathom why she had a looks complex, or why people called her 'dark'. She was skinny, true, but she soon put on enough weight to shed that adjective for good.

Shobhana Samarth — the famous Seeta of Vijay Bhatt's blockbuster Ram Rajya (1943) was among the early woman directors in Indian cinema — and her daughters Nutan and Tanuja lived in a beautiful bungalow, its exterior painted to look like bricks, somewhere in Chembur, an extended suburb of Bombay in those days. The youngest daughter Chatura and their only brother Jaideep were studying away from the city.

Even in those days, the Samarths had a swimming pool in the well-kept garden and one dog too many. They owned a three-storey building at the back of the complex and I would visit my uncle who lived there for maths tuition every weekend. Each time I went, I hoped to catch a glimpse of Nutan but could get to see her only twice or thrice in the garden, tending to the dogs or scolding the staff, still draped in a sari or wearing a salwar-kameez and looking the least bit like the star she was. Soon, my maths tuition ended and I stopped visiting the place.

Shobhana Samarth was a single mother because she had separated from her husband Kumarsen Samarth when the children were quite young. Kumarsen Samarth had been to Germany to train in cinematography and direction and they married after he came back. But his film career never quite took off while Shobhana was quite successful. She had a very close relationship with the great actor Motilal, who remained a bachelor all his life. Nutan was born on 4 June 1936 and died of breast cancer on 21 February 1991.

The Samarths were Maharashtrians and Nutan’s maternal grandmother, Ratanbai Shilotri, acted in Frontiers Of Freedom (1937), a Marathi film, in 1936, the year Nutan was born.

Right through her life, Shobhana Samarth remained financially independent and even drove around in her own car. She was one of the highest paid actresses of her time and set up her own production house, Shobhana Pictures, to produce four films, launching both Nutan and Tanuja.

Both girls grew up to become outstanding performers of two distinct kinds till Tanuja’s daughter Kajol came and outstripped them all with her thumping success as an actress. 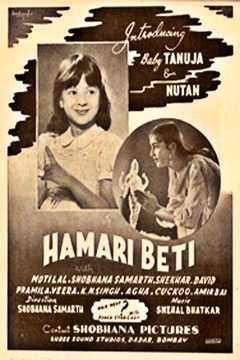 Nutan made her debut in a film called Hamari Beti (1950) when she was 14. Interestingly, though she felt she did not have the looks, Nutan won the Miss Mussoorie contest in 1952. After Hamari Beti, she played the heroine in Hum Log (1951) and Nagina (1951). Both proved popular and set Nutan on her way. But her mother felt she needed polishing and packed her off to a finishing school, La Chatelaine, in Switzerland, which Nutan always said was the best time of her life.

In 1955, she made a splash in the film Seema in which she had a much layered and difficult role few glamorous heroines would have agreed to step into. Her character Gauri becomes a juvenile delinquent when, as an orphan working in different homes, people try to take advantage of her and one goes to the extent of molesting her. She beats the offender black and blue, but he takes revenge by slapping a fake charge of theft and she is packed off to an ashram filled with orphan girls with different problems.

Gauri's bouts of anger and violence continue at the ashram, which leave the management disgusted. But the head of the ashram, an elderly man Ashok 'Babuji' (Balraj Sahni), uses music to calm her down. During this process of metamorphosis, Gauri falls in love with Babuji who tries to move away, but she catches up with him.

The film has some beautiful songs. Though the 'Manamohana' number, used twice in different ways, one in which Nutan sings while smashing window panes and one in a serious ambience, is always mentioned, there are three others that are equally memorable.

One is when the tomboyish character portrayed by Shubha Khote sings to appease the anger in Nutan, which goes 'Baat Baat Mein Rutho Naa'. One is when Nutan sings a song that is a metaphor for Gauri's life story, 'Suno Chhotisi Gudiya Ki Lambi Kahaani'. And the last is 'Tu Pyar Ka Sagar Hai'. In each of these, Nutan’s varying shades of expression are a treat to watch, as if allowing the audience to visualize the lyrics in its mind’s eye with her face and body language, filled with restraint and yet spelling out the drama.

Sone Ki Chidiya (1958) did not click at the box office, but it will be remembered for Nutan’s masterful performance as an orphan who, accidentally, becomes a big film star and is trapped by the same distant relatives who had wanted to throw her out. She is thoroughly exploited not only by these relatives but also by the man she falls in love with. though she is the one who helped him become an actor.

Sone Ki Chidiya was one of the earliest Hindi films to unravel the darker side of a star’s life. The director used clips from Nutan's other films opposite other actors to underscore the star aspect of Lakshmi’s character.

Nutan also shone in blatantly commercial films with entertainment spelt in capital letters. Mention must be made of her movies opposite Dev Anand such as Baarish (1957), Paying Guest (1957), Manzil (1960) and Tere Ghar Ke Samne (1963), which were musical romances spilling over with wonderful songs and their picturization.

Nutan also sprang a very pleasant surprise with her change of screen image in Dilli Ka Thug (1958) opposite Kishore Kumar. This was a laugh riot with the nonsensical antics of Kishore Kumar and a bubbly Nutan appeared in one scene in a one-piece swimsuit, a shocker at the time. All these films were thumping box-office hits as well.

Anari (1959) and Chhalia (1960), in which she was cast opposite Raj Kapoor, were also hits, so it was pretty clear that Nutan could slip into any role opposite any actor, no questions asked.

We saw another face of Nutan in two different films with a gap of a decade between them. One was Saraswatichandra (1968), a period piece in which Nutan played a victim of domestic violence who turns to a spiritual life. The other was Main Tulsi Tere Aangan Ki (1978), where she played the wronged wife who brings up her husband’s mistress’s son as her own. Though the script backed the other woman portrayed by Asha Parekh with equal élan, it was Nutan who ran away with the kudos.

Over time, Nutan switched to mother roles such as in Karma (1986), where she played the wife of Dilip Kumar’s police officer who loses her power of speech, and in Meri Jung (1985), which portrayed her as Anil Kapoor’s mother.

Her work in Southern remakes like Milan (1967), Gauri (1968), Devi (1970) and so on were big successes, but they did not carry the magical charisma of Nutan's talent. She excelled in a film titled Saudagar (1973), in which she was pitted against a young and awkward Amitabh Bachchan who played a negative character who marries her only because she makes excellent jaggery and divorces her the minute he falls for a seductive number.

Irrespective of director, role or banner, Nutan always gave of her best without the need to glamorize herself, unless the role demanded it. In Sujata (1959), Nutan played an 'untouchable' girl with stunning grace and conveyed her hurt, her trauma with just a glance or a gesture.

It is said that Nutan did not initially agree to don the dark makeup Bimal Roy had planned for Sujata. According to Roy, Sujata had to be dark-skinned to distinguish her from the rest of the family, as she was an 'untouchable' and Upenbabu (Tarun Bose) belonged to the highest caste of Brahmins. But Nutan was insecure about wearing dark-toned makeup.

Bimal Roy waited patiently for his leading lady to agree. At long last, she relented, on condition that the makeup would not be black. The irony in this story is that Nutan looked perhaps the most beautiful of all her screen roles as Sujata in the dark makeup with that tiny bindi between her eyebrows, wearing a simple Bengali cotton sari with the pallu tied around her waist as she goes about silently doing her household chores.

In his deftly crafted screenplay, Nabendu Ghosh etched a fully fleshed-out character and as the film moves along one feels Ghosh wrote the character with only Nutan in mind. Sujata won the Best Film, Best Director, Best Actress and Best Storywriter awards at the Filmfare awards in 1960 at a time when awards for Indian cinema at home were valued and not part of an anonymous medley of indifferent and manipulated private awards.

Sujata is, perhaps, surpassed only by Nutan's performance in another Bimal Roy film, Bandini (1963). She proved once again what a thinking actress she was, one who tried to fathom the inchoate motivations of the characters she played. She could convey much more with just a look or fleeting glance than many actresses could with expansive dialogue. Lata Mangeshkar singled her out as the heroine whose expressions came closest to suggest that she was actually singing the song herself.

In Bandini, Nutan communicates mainly with her eyes because her character is a woman of few words. Nutan underplayed the character, fleshing Kalyani out as a quiet but determined woman with a dignity that belied her prison backdrop and her murderer status. Her mental state is expressed through a flood of fleeting emotions on her face, especially in the scenes leading up to the murder and afterwards. When the body is discovered the next morning, she pulls at her hair, her sari falling off her chest, screaming out that she is the one who has killed the woman.

Nutan had almost given up films after marriage. She was pregnant when Bandini was being made. Bimal Roy persuaded her to accept the role.

Nutan once said, “Two of my best roles were penned by Nabendu Ghosh, for Sujata and Bandini. These films by my favourite director Bimal Roy brought out two unknown aspects of womanhood and fired an intensity not seen in any other film of mine. Nabendu-da and Bimal-da formed one of the greatest scriptwriter-director combinations of Indian cinema.”

During her long career, Nutan bagged six Filmfare awards, a record broken by none other than her own niece, Kajol. She also won three Bengal Film Journalists’ Association awards for Best Actress. She was bestowed the Padma Shri in 1974 and a postage stamp was brought out with her picture and name. Her marriage to Rajnish Bahl was a happy one and their only son Mohnish is a successful actor in cinema and on television.

Towards the end of her life, which blew out on 21 February 1991, it is said that she had turned to spiritualism and though her sole television serial was a big hit, she stopped working in films or on television.