Cinematographer Rathnavelu revealed via his Twitter page that the shoot of Syeraa Narasimha Reddy (2020) has been completed and that the film has shaped out “extremely well”.

The shoot of megastar Chiranjeevi’s upcoming Telugu magnum opus Syeraa Narasimha Reddy (2020), which has been produced by Ram Charan on a whopping budget of Rs150 crore, has been finally wrapped up after being on the floors for nearly two years.

Cinematographer Rathnavelu revealed via his Twitter page that the shoot has been completed and that the film has shaped out “extremely well”.

Syeraa shooting completed !!Thanx to each n every member of Team Syeraa for their hard work n cooperation .A memorable journey indeed!! Movie has shaped out extremely well💪💪. Kick started the DI too 😊 @KonidelaPro @DirSurender pic.twitter.com/wjBZM3gZLE

“Syeraa shooting completed. Thanks to each and every member of the team for their hard work and cooperation. A memorable journey indeed. Movie has shaped out extremely well. Kick started the DI too,” Rathnavelu tweeted along with two pictures from the sets. 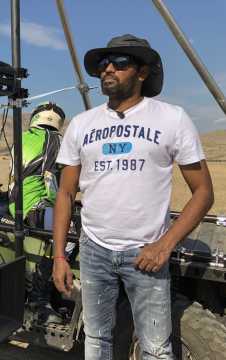 In the film, Bachchan plays Chiranjeevi’s mentor. Last March, he had joined the film’s sets and he was thrilled to be part of this project. Before joining the sets, he shared a blog post in which he wrote about why this film is special.

“Dear friend Chiranjeevi, that majestic super star and icon from the world of Andhra and Telugu cinema, requests for a guest appearance in his magnum opus, on a most valiant period character that he portrays, and I agree. So, am off to begin its shoot in Hyderabad in a few hours,” he wrote and shared his look from the film.