The success of the campaign was highlighted by actor Atul Tiwari at a prayer meeting for the late playwright in Mumbai yesterday.

Earlier this week, the Karnataka government decided to shelve the proposed 6.7 kilometre steel bridge in Bengaluru that would have entailed cutting down nearly 800 full-grown trees.

The decision came after widespread protests against cutting trees to build the bridge. Among those to participate actively in the protests was Girish Karnad, the versatile actor, writer, playwright and Rhodes scholar who passed away last week.

The success of the campaign against the flyover was highlighted by actor Atul Tiwari at a prayer meeting for Karnad yesterday in Mumbai.

“If Girish were here today, he would have been happy," Tiwari said. "A steel bridge was being made in Bangalore for the convenience of cars. And for this, 800 trees were to be cut. But after the people’s protest, yesterday it was stopped. Girish Karnad was one of the protesters,” said Tiwari to applause from an audience that had come from as far as Pune and Bengaluru.

In other words, Karnad’s effort yielded fruit though he is no longer around to enjoy the success. Karnad, who had been ailing for a while, died on 10 June in Bengaluru of multiple organ failure.

Continuing about Karnad’s activism, Tiwari said, “Whether it was the murder of [journalist-activist] Gauri Lankesh, [Communist leader Govind] Pansare or [litterateur MM] Kalburgi, Girish never shied away from getting counted. Even if a tree was getting cut in Lalbagh in Bangalore, he would be present there with his oxygen tank and nose-tube. Even when doctors told him he had very little time left, he always had time for people's causes.” 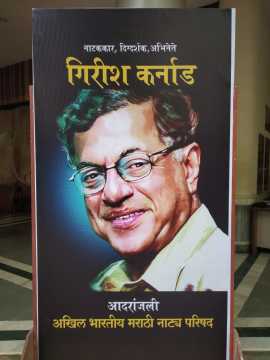 Karnad was once director of the Film and Television Institute of India (FTII). Tiwari shared an interesting bit of trivia related to his tenure at the institute. “He became director of the Pune institute when he was just 35," the actor said. "His student Saeed [Akhtar] Mirza was older to him.”

Veteran filmmaker and theatre personality Jabbar Patel was among the speakers at the event. Patel said Karnad was one of the few who took national theatre to bigger heights. “We had Badal Sircar in Bengal, Mohan Rakesh in Hindi, Vijay Tendulkar in Marathi and Girish Karnad in Kannada," he said. "Girish was the youngest of the four. The four of them rising to the national level was a big boost to national theatre in my opinion.”

Karnad had played a pivotal role in Patel’s Marathi film Umbartha (1982), starring Smita Patil. The filmmaker recalled a moment from the film to highlight Karnad’s talent as an actor. “A man with an intelligent face, a lawyer and a pleasing personality can tell his wife that there is another woman in my life and she will stay. This was Girish’s speciality,” he remarked.

Patel pointed out that Karnad was never arrogant despite his vast knowledge. “He had studied the Mahabharata, the Ramayana, literature and had excellent knowledge of music. But despite this, he never showed any arrogance. The reason for his social and political contribution was his devotion to life, society, Dalits and women,” he said.

Karnad had received the Jnanpith award in 1998 for his contribution to literature. Patel recalled Karnad's utterly surprised reaction when he learnt of the honour: “He said, ‘Oh, they gave it to me? They should have given to Tendulkar!’ Just imagine, both are from the same era. After getting such a big honour, this man says I am accepting it as they have given it to me, but I feel they should have given it to Tendulkar.”