I don’t have much pressure, says Saaho director Sujeeth


The young filmmaker behind this year’s anticipated action flick reveals some tidbits about Saaho, which is being released on Independence Day.

The hugely anticipated Saaho (2019) teaser is out and all eyes are on young filmmaker Sujeeth who is helming Prabhas’s follow-up after the back-to-back Baahubali (2015, 2017) blockbusters.

The 28-year-old made his first film, Run Raja Run (2014), at 23 and his second, one of India’s biggest action thrillers, arrives in theatres on Independence day, 15 August, this year.

In an informal meeting after unveiling the Saaho teaser in Mumbai, the young writer-director spoke about handling the pressures of a big-budget film and working with Prabhas.

The film is being released in Hindi, Tamil and Telugu. People were pleasantly surprised to know that Prabhas has dubbed his own dialogues for the Hindi version.

“It’s his own voice,” Sujeeth confirmed. “Normally, in Hyderabad, we speak Hindi pretty well. People outside don’t know that Prabhas can speak Hindi.”

He thought, for his second feature, casting Prabhas was the perfect choice. “After [the Baahubali films] I think people pretty much know Prabhas sir, so I don’t need any 'Bollywood' actor. Storywise, whomever I feel right for the character. That’s why I picked Jackie [Shroff] sir, Neil Nitin Mukesh sir, Mahesh Manjrekar, Mandira Bedi and Chunky Pandey. [Pandey] is quite different [in the film].”

Sujeeth was evasive when asked if the ensemble cast were actually playing villains, saying diplomatically that everyone has a good and a bad side. He was equally reticent to talk about a possible sequel when the film hadn’t been released yet.

He did speak about actress Shraddha Kapoor and her character in Saaho. The teaser begins with Kapoor's character, not Prabhas’s, and that was a conscious decision by Sujeeth after the feedback he received from his mother for his debut film.

“When I made my first movie, my mom watched it and said everything is all right, but you didn’t have anything important for the female character. That’s when I took it personally and thought one female character, I’ll make her really strong.

While everyone wanted to discuss the pressures the filmmaker might be feeling, Sujeeth brushed it off. “Frankly, I don’t have much pressure, because first, my producers and Prabhas sir, they believe in me a lot, so that makes you comfortable. And second, I don’t meet people outside, so that way you don’t have pressure at all.”

He added that the Baahubali star is a really sweet guy who puts everyone at ease. Sujeeth also said the teaser’s ‘fans, die-hard fans’ moment is a nod to fans who have been waiting patiently for the film. Even his parents have been nagging him about what he has been up to and why it has been taking so long.

The filmmaker explained that while it did not take him long to finish Saaho’s script (two months), he had to make sure he had enough preparation before heading in to shoot.

“The first thing I did was learn action,” he explained. “To make action, you need to learn action. When I met [Kenny Bates] in 2015, at that time I had all the sequences with me. When I met him and all, he liked the ideas and all. Before I met him, I had all the concepts with me, all the ideas, what I want to do. It took one year for us to [prep] with it.”

Further, he spoke about working on the long and difficult process of visual effects.

“The reason we do VFX is to make it more believable. In a movie like this, it’s only enhancement. It’s not like we are trying to create a whole VFX world. There is no end to VFX actually. So it took some time for me to adjust and digest all the things because it doesn’t happen immediately,” he said. 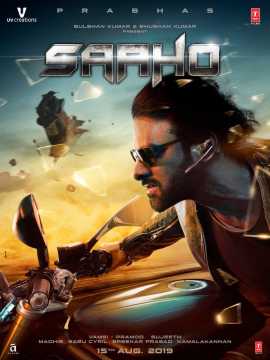 The proof of the pudding is in the eating. Saaho’s teaser shows the action is based in the real world and the VFX builds on it, making extraordinary situations look ordinary. Many of these action sequences were shot in places like Dubai, Abu Dhabi and Australia, but the story doesn’t necessarily take place there.

Finally, the question on everyone’s mind was the title of Saaho, the idea behind it. “Saaho is a name," said Sujeeth. "In Sanskrit, if you want to praise someone you say, ‘Saaho Prabhas’. And why I put Saaho is part of the movie,” he replied, again not wanting to give much away.