The only love is true love: Madhu Narayanan on his directorial debut Kumbalangi Nights


The Malayalam filmmaker speaks about everything that went into the making of his fabulous debut movie.

A still from Madhu Narayanan&#039;s directorial debut Kumbalangi Nights
give your opinion

Madhu Narayanan’s stunning directorial debut, Kumbalangi Nights, is a family drama that tells a moving story of a dysfunctional family of four brothers living in Kumbalangi, an island village.

The film explores the dynamics among the brothers while contemplating ideas of masculinity, patriarchy and labour, all with a firm grip on humour.

Although the film marks Madhu Narayanan’s directorial debut, he has been working in the Malayalam film industry for the past 10 years. He assisted Aashiq Abu on his blockbuster feature Salt 'n' Pepper (2011) and worked on 22 Female Kottayam (2012), 5 Sundarikal (2013), Rani Padmini (2015) and Maheshinte Prathikaram (2016).

Cinestaan caught up with the director at the 14th Habitat Film Festival, where Kumbalangi Nights was screened, and asked him about the making of his film. Excerpts:

Kumbalangi Nights is set in a sleepy village and focuses on the microcosm of the family which then opens up into exploring larger contemporary issues. How did the story come about?

This story is by the writer Syam Pushkaran, who is also the writer of Salt 'n’ Pepper. He belongs to a place near Kumbalangi. He has a lot of friends there. From there he got the idea of a family where the siblings have different father and mother. From there we developed four different stories.

You said it took you three years to conceptualize the film.

Actually we had the storyline in 2011, Syam and I, when we worked together and I was assistant on Salt 'n' Pepper, so we decided then that we will make this story whenever we are ready. Three years ago I decided that I will focus on my own movie and moved to this place, rented a house, and stayed there for two years because I did not know much about the area as it is an island.

And you always thought of Kumbalangi Nights as a mainstream film?

But even in this space, you are exploring themes that are unusual, like mental health. There is a character who actually seeks professional help for what he is unable to come to terms with.

Every person has different levels of mental health. This is the point Syam and I wanted to show. If we have a fever or an ache, we go to the doctor, but if we have any mental issues, we will not go to a doctor because other people will judge us. We wanted to discuss that, because sometimes our friends or family members can help us but other times we need the doctor’s help, so people should not feel bad about it. There are so many ways to get help. That’s the point we wanted to discuss.

You also explore patriarchy in the film through three different women. Along with this is the toxic masculinity of the character of Shammi played by Fahadh Faasil, who weasels his way into taking control of the family. 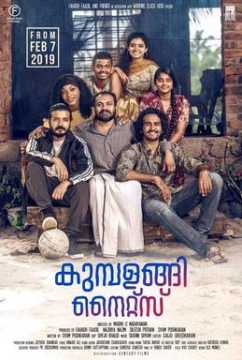 That house represents an average Malayali family. Men think women are supposed to do everything for us. When we grow up, we see all this. The elder sister in the film follows what her mother teaches; the younger one is different. We wanted to show that difference because we want to change that culture. Everybody is equal. Simply that. So we wanted to address that in a very subtle way.

Another thing you address subtly is the idea of labour, where the factory is shown as a sterile, soulless place and Bobby (Shane Nigam) is unable to accept that.

You feel free to do what you love. Don’t feel bad about fishing. If you are happy doing that job, there is dignity in it. Don’t feel bad if some people don’t like that job.

How difficult or easy was it for you to get the fabulous cast together and Fahadh in a negative role?

Actually, I have been in the movie industry for the last 10 years and all these people are my friends. Soubin [Shahir] was an assistant director and we worked together. Fahadh has also worked with me. He is a very good actor with a very good attitude, otherwise he would not have agreed to play this kind of a character. He was very excited by the role and when we were developing the script, he used to call and ask, is there anything else [written] and we would tell him one scene and he would keep on laughing, so he was very interested in doing the role.

Humour allows one to explore very serious issues, so how important was it for you to use humour in telling this story?

While watching the film, people get emotional in one scene and in the very next they will be laughing, so that’s what feel-good cinema is. We took more time to shoot things in this way. We would set up things and actors would perform and we would play that. When we were sure the scene would work, only then would we go for the shot because that’s a very important thing. The way in which they act and communicate beyond dialogue, people should understand those minute details and their equations.

There is this exasperated dialogue in the film when Bobby’s girlfriend says, 'Is there no true love!' Are you a romantic and is that in part your exasperation at the world today?

(Laughs) 100%! The only love is true love, there is no second love, but for several reasons people feel it won’t work out because of family differences or caste differences. I believe in true love. I married a Christian woman so I truly believe that true love should be there.

Kumbalangi Nights was screened at the 14th Habitat Film Festival at New Delhi's India Habitat Centre on 24 May 2019.