With her upcoming multilingual release Game Over, Taapsee Pannu opens up on her return to Southern cinema and why she believes this film will be a game-changer not just for her, but for Indian cinema.

Ever since her breakout film Pink (2016), Taapsee Pannu has had her hands full with assignments in Hindi cinema, leaving her hardly any time for the South. Her last full-fledged outing in the South was Raghava Lawrence's Kanchana 2 (2015). She was also seen in a brief role in the Telugu horror comedy Anand Brahma (2017).

With her upcoming multilingual release Game Over (2019), Taapsee Pannu returns to the South and is super thrilled as she believes it will be a game-changing film not just for her but for Indian cinema.

Ahead of the film's release on Friday, Pannu opened up about the project in a group interaction. Excerpts from the interview:

How did you zero in on the Game Over script?

I heard the script one-and-a-half years ago. Sashikanth, the producer, called me and pitched it to me. I knew Ashwin's [writer-director Ashwin Saravanan's] work in Maya (2015) and later talked to him to discuss the script. When I called him, he gave me the whole written script. The script and story have never been seen in Indian cinema, to my knowledge. Even in the Hindi films I have done, I did not find this script. So, I agreed to do the film, be it any language.

I always do one Telugu film a year, but you can say this is a straight Tamil film I am doing after Kanchana 2, the Raghava Lawrence movie. The story of Game Over is a game-changing one for Indian cinema.

Did this movie take a toll on you physically, to play a physically challenged woman in two languages?

It did, yes. I have not had even a hairline injury in my life, to date. To act as a wheelchair-bound person for almost 60% of the movie was a challenge.  Added to that, it was taking a toll on my mind too. I play a traumatized girl in the movie. You might have seen the trailer, with me hallucinating. I have an accident in the movie and then slip to mental and physical trauma.

How did you manage the prosthetic makeup?

I ended up doing my makeup, tying my legs, even in my lunch hour. I shot the movie for 35 days. The leg cast took me half an hour to put on. I shot 12 to 15 hours every day. Thirty-seven days was the entire shooting time, with some patchwork.

You literally carry the film on your shoulders. Don't you feel tense?

No, I consider cinema a director's medium. And Ashwin Saravanan is a brilliant one. He guided me all through without feeling down at any moment. But when my Tamil poster announced 'Taapsee's comeback film in Tamil', I felt conscious. But I composed myself and went with the tide.

In Hindi, generally, we don't put actors' names on posters. But I am proud to do a film in three languages every year. 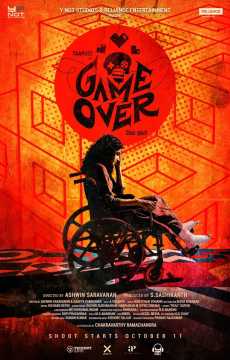 You seem to have evolved as an actress in your choice of movies.

I value viewers’ money, as they themselves value it. When I was a newcomer, I did not know the trade and made some mistakes in my choice of films. But as time evolved I started thinking whether the viewers who work hard and earn money, is this script worth their money and will I excel in fulfilling the script demand?

You play a gamer in the film. Are you a video game freak?

How did you unwind to get out of your character in Game Over?

I used to unwind by not staying alone. I went back to Mumbai to my friends’ home and stayed with them. As it is, the story has me as a lonely woman. I surrounded myself with people whenever I got a short break. You should remember we shot the film at a stretch in 35-36 days. Also, I went on holiday for a week or so.

Were you dissuaded that people would get bored to see only you for 90% of the film? Did you discuss the pros and cons with the director?

No! When I was doing the movie, my focus was on playing the character and nothing else. But when I saw the poster, it was then I realized it was a solo character film. I did not discuss anything with my director about this aspect. You do not have any option but to bear with me for the whole movie (laughs).

Could you elaborate on the genre of Game Over?

It is basically about house invasion, but the script has many layers to it. This is for the first time India is seeing such a movie. For the rest, you have to watch it in the theatres. Even the shooting of the film is designed like a videogame. The youth will truly connect with this film. You see me moving in my house just like a videogame character. 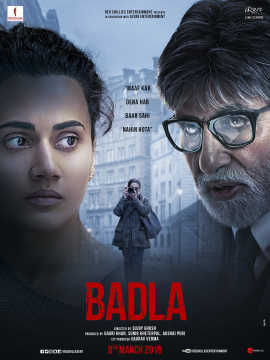 With your last release Badla (2019) grossing over Rs100 crore, do you feel more pressure for your films to do well?

It is crazy. I respect the audiences who come with their brains intact and appreciate your work, seriously. If people liked Badla, they definitely will like Game Over. I don’t take the box office pressure, but I do wish my films do well, especially for my producers.

What was it like to work with Amitabh Bachchan for the second time, after Pink (2016)?

It was great; we treat ourselves with mutual respect. He does not like co-actors to treat him as THE Bachchan, just as a colleague. We interact a lot and talk a lot about movies.

You are doing Saand Ki Aankh (2019) with Bhumi Pednekar. Are you game for a two-heroine script?

Oh, yes! I always want to explore my possibilities as an actor. It was I who went to the producers searching for a two-heroine script, but I did not know those two heroines were old ladies [in Saand Ki Aankh]. Anurag Kashyap was game with me doing one of the roles instantly. The producers were surprised to hear I was okay playing a 65-year-old lady, but I look for challenging roles.

You are doing three to four films a year. How do you balance the quality with the quantity?

I have been getting some really good scripts. Not a big deal to choose good scripts. It is my personal choice to do three to four films a year.

Your film Pink is being remade in Tamil? How do you feel about it? Were you approached for the Meenal Arora role in Tamil?

It's actually the other way round, right? South films are remade into Hindi and I am proud my film in Hindi is being remade in the South. I was not approached for the role in Tamil, thank god for that! To relive Meenal Arora would be really taxing.

After Game Over, will we see you being more active in the South?

I have finalized one film in Tamil, which I will start after Game Over is released. Also heard one or two more in Telugu, yet to decide, but will do at least one film each year for sure.

Any plans of getting into production like your Southern counterparts such as Nayanthara?

Not right now. I believe production needs someone on the ground to oversee the work, which I cannot do now, with my busy schedule as an actor. If I find a partner who can manage it on my behalf, I will think of it.