15 years of Dev: Govind Nihalani looks back at the coup of casting Amitabh Bachchan with Om Puri


Also starring Kareena Kapoor and Fardeen Khan, the film on the subject of communal tension continues to be relevant.

In 2004, Nihalani came up with another film dealing with a social issue — communalism — but with a star cast that included names like Amitabh Bachchan, Om Puri, Fardeen Khan and Kareena Kapoor Khan. The cast was the only difference in an otherwise true-blue Nihalani film.

Casting commercial film stars did not result in any compromise on storytelling or presentation. Dev made a strong statement against communalism through a realistic and disturbing picture of an India that had recently welcomed the new millennium. 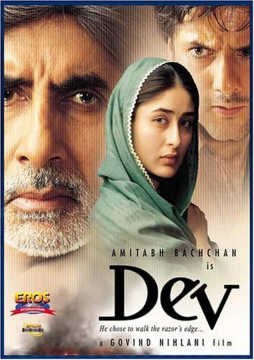 As Dev completed 15 years today (it was released on 11 June 2004), Nihalani discussed the film with Cinestaan.com.

Asked how he picked the subject, the filmmaker said, “It didn’t come via a particular source like a book or a news item. A lot of incidents had taken place at that time and before, including the Gujarat riots of 2002. It made me think if something can be done on this. But this whole structure was suggested to me by my assistant Meenakshi Sharma. We discussed it and she wrote it.”

Dev revolves around the friendship of the upright joint commissioner of police Dev Pratap Singh (Bachchan) and special commissioner Tejinder Khosla (Puri). Farhaan (Khan) is a law graduate who believes in peace and kindness. But Dev accidentally kills his father during a demonstration.

A Muslim politician Latif takes advantage of the situation and uses Farhaan to stir up communal trouble by carrying out a bomb blast. This causes riots in which Farhaan’s lover Aaliya (Kapoor) also gets trapped.

On the other hand, chief minister Bhandarkar (Amrish Puri) ensures that the police do not intervene to stop the violence as he feels that the 'pent-up sentiments' of the Hindus deserve a vent. Dev is caught in the midst of this mess.

He felt the same about Om Puri, with whom he had worked in several films before. “Sometimes you cast according to the feeling," the veteran director explained. "You get a feeling that this actor will be just right for a role. These were the two people (Bachchan and Om Puri) who just came to my mind.”

Nihalani, of course, had been looking for a long time for a script where he could cast his perennial favourite Om Puri with Amitabh Bachchan. “Both are such powerhouse performers," he said. "The dedication as well as the understanding with which the relationship between the officers emerged, I felt, was very successful. I was very happy with that, particularly their scenes at the end. Personally also they had such good rapport with each other.”

This was the second time Nihalani gave us a serious and realistic view of the police after his classic Ardh Satya. The common thread in both films was Om Puri.

Dev was the first time Bachchan starred in a Nihalani film, and the filmmaker was motivated to cast the one-time superstar by the latter's wife Jaya, whom Nihalani had directed in Hazaar Chaurasi Ki Maa. "She had told me that once I work with Amitji I will always feel like working with him," he said. "As it turns out, even today I want to make films with him.”

The surprise in the film's cast was Fardeen Khan, known more as a hero in commercial multi-starrers. But Nihalani did not see it like that. “The problem is we stick some label or the other on actors. Like you said, he is a commercial actor. But we look at them as actors and see if they fit a particular character,” he said.

Asked if Khan was his first choice for the role of Farhaan, the filmmaker said, “Yes. I am happy that all those who were approached agreed to be in it. Casting is not just about how much this particular actor will sell for in terms of distribution price and all that.” 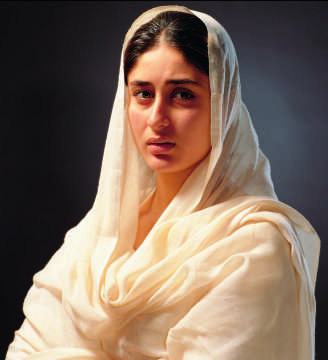 The film saw Kareena Kapoor turn in an astonishing performance in a riot scene and, later again, when she testifies against a politician for inciting the riots and the cops who refused to act.

Nihalani was all praise for her. “She was so good and dedicated," he recalled. "She handled the role honestly. An actor like Kareena is capable of playing a variety of characters. Just because most of the time she has worked in mainstream cinema doesn’t mean she is incapable of anything else. As a director, we see a character which has emerged from the script. Then we see which face, personality or even voice will go with it.”

The scenes of communal violence in the film remain hard-hitting even today. The moment when Fardeen Khan's character takes an injured Kareena Kapoor to the hospital on a four-wheeled handcart still shakes you up.

Nihalani believes all this was possible only because of team effort. “In such things, there can’t be a single reason why it was done well," he said. "You are constantly interacting in your world where all these things are happening. We must remember that actors and everyone associated with a film are also from the same time and territory, India. They get together and create a kind of bond among themselves. So I can’t pinpoint [any one reason why the film came together so well].”

Nihalani also said such subjects are not being attempted much these days. Asked if he believes a film like Dev would have got a smooth release today, he laughed, “It didn’t get an easy release back then either. There was no controversy. But those who were releasing the film looked at it as a difficult subject. They were not sure whether it would be accepted by the public.”

Fifteen years later, Dev is one of Nihalani’s favourite 'children'. “This is an important film in my filmography because this is not a [well-]known film," he said. "The same is the case with Tamas, Ardh Satya, Aakrosh. There is always a struggle to find such subjects and take them to production. Film is a very expensive medium.”