Marathi film star Swapnil Joshi speaks about his character in his upcoming Mogra Phulaalaa and about moving away from his image of the talkative lover boy.

Swapnil Joshi has been among the leading stars of Marathi cinema for several years now. He is best known for playing the lover boy, thanks to the three films in the Mumbai-Pune-Mumbai franchise and his stint in television serials like Eka Lagnachi Doosri Goshta.

But the actor has gone through a transformation for his upcoming film Mogra Phulaalaa, which also features television star Sai Deodhar in a pivotal role.

Directed by Sai's mother and veteran filmmaker Shrabani Deodhar, the film will see Swapnil Joshi play a shy, almost introverted man in his thirties who is unable to find the right bride, thus overturning his chirpy hero image.

During a recent conversation with Cinestaan.com, Joshi spoke about his character in Mogra Phulaalaa and the process of transformation and also looked back upon his career and explained how he deals with success and failure. Excerpts:

What is the relevance of the title Mogra Phulaalaa?

I play Sunil Kulkarni. The term ‘mogra phulaalaa’ has a mystical connect with the Marathi audience. [Mogra is a variety of the jasmine flower.] Sant Dnyaneshwar has written, ‘Mogra phulala, mogra phulala, Phule vechita bahru kaliyasi aala.’ Those lines are our culture. That is who we are. The blossoming of the flower is symbolic of love, happiness, the beginning of something new or problems getting solved. It is associated with positivity. From the title itself we wanted to set a note that this is the genre itself.

You have moved out of the image of the chirpy lover boy. Your character in the film is shy and introverted. How challenging was it?

It was very challenging, but it was a satisfying experience. Shrabani-tai [Marathi honorific for older sister] had given me a brief that if this person is standing at Dadar station [an extremely busy junction for suburban services and outstation trains in central Mumbai], nobody should know he is our hero. He should blend in with all the other people standing at the station. He shouldn’t look different. He should be one with them.

I don’t know if people will notice it, but even his costumes are purchased from regular stores. They are not branded or made to order. His shirts and trousers are a bit loose. Those are the clothes that normal people wear. They wear any shirt with any trousers. Nobody gets out of the house in the paparazzi zone. Only actors do that. 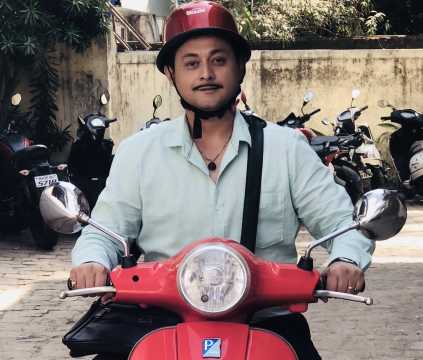 I will tell you one interesting kissa. We were shooting one of the songs in Dahanu [a town about 100km north of Dadar]. It was lunchtime. I was sitting on a park bench in my get-up as I was tired and was talking on the phone. Two people sat just away from me. One person told the other that Swapnil Joshi’s shoot is taking place here and he hasn’t come yet; he will come. I was sitting a feet away. They didn’t imagine I would be sitting there in such a get-up. There was nobody carrying an umbrella and no bodyguards.

So, I enjoyed this film because I could be one with the environment. Otherwise you come in suits and jackets with bodyguards, go in the vanity [van], people mob you for selfies, etc. Here I could just pick up my scooter, drink a chai at a tapri [roadside stall] and people would be like, “Yeh kaun aake gaya [Who is this fellow]?” It gave me a lot of joy as an actor to enjoy this simplicity.

We did workshops for almost three months. We were in the process of scripting for a year and a half. I was [involved] in the process with Shrabani-tai. So, I knew what was happening and the Dadar station brief was so clear! When you see the film you will realize he has no heroic lines, he doesn’t solve humongous problems and he doesn’t beat up the goons.

I am reminded of Raj Kapoor saheb’s song — Kisiki muskurahaton pe ho nisaar, Kisi ka dard mil sake toh le udhaar... Jeena isi ka naam hai. Those were the times when heroism was attributed to these simple things. He is a simple boy whose heroism is that he can’t see his family unhappy, he doesn’t want his mother to shed a tear and he wants his sister to get married into a good family. This is the real heroism. It is not about fast cars and expensive watches. That is glamour.

Heroism is about experiencing normal situations and rising above them. This is an endearing character. You laugh and cry with him. He fails. The biggest takeaway for me as Sunil Kulkarni is that he fails. That doesn’t make him a non-hero because we all fail. He fails miserably. But what wins is his endurance of trying again.

You are working with a veteran like Neena Kulkarni after a long time.

It is after 14 years. Neena-tai puts it very well. She says it was like vanvaas [exile in the forest, a reference from the Ramayana] which ended with this film. Working with her is like working with an institution. I am so overwhelmed that I got to share space with Neena-tai on the big screen. Every actor dreams of working with her. She has worked with the biggest of them. She has worked with Shah Rukh Khan. There is nobody bigger than that. To be able to do a one-on-one sequence with her is a different high as an actor. And only an actor will understand this.

So, this film gave me a lot of fun as an actor also. It is like a boy who has gone to Universal Studio sitting in this ride and that ride. There is Chandu Kulkarni in one ride and Neena Kulkarni in another. There is so much to learn from these guys; the fire and hunger. Neena-tai said the time, energy and emotions we invested in our show 14 years ago, those really nurtured and helped us in this film.

You started your career playing Krishna, a role that people still remember. And you have been an actor ever since. How would you describe your journey?

I think it’s very enriching, entertaining and endearing. I think I have been very blessed. Somebody was asking me that I am taking a lot of risks one after the other and why am I doing so at this stage of my career. I did Ranangan (2017), Bhikari (2017), Me Pan Sachin (2019) and now Mogra Phulaalaa (2019). I said I can do it only at this stage of my career. This is what the industry has given me. I am who I am because of the industry. If I don’t take risks now, when will I take them?

Success matters. I would be lying if I said I don’t want all my films to be superhit. I definitely want them to be. But at this stage of my career, happiness matters as much as success. You do some films because they just make you happy. 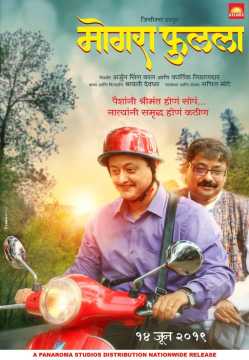 There are times when you are happy with a film, but for some reason it doesn’t work at the box office. How do you deal with it? Does it affect you?

It affects me miserably. I cry. I cry in the shower and I shut myself [in a room]. I go out and don’t talk to anyone. I am human. I would be lying if I said it didn’t affect me. It affects me because I put my heart and soul in it. But you gather courage, move on and start afresh.

It’s like romance. One day another story comes and you see her like a girl, like she is so beautiful. Then you woo her. I see films and scripts as romance. Some affairs work, some don’t. If it doesn’t work, you crib, cry and go into isolation. You do all that jazz. Then there is a completion. You give closure to that. Then one day you see another lovely girl and you fall in love with her and another affair starts. I see films like that.

Have your criteria for signing films changed over the years?

With time and maturity of course it changes. Initially it was the banners. Eventually it became scripts. Now it is scripts. We all go through that phase.

Right now the only thing I want to talk about is Mogra [Phulaalaa], for two reasons. One, I’ll get a chance to meet you guys again for the next one (laughs). Second is because right now, honestly, there is nothing else on my mind. Somebody just asked if I am following the cricket World Cup. I can’t because I am occupied with the trailers, mixing, songs, city tours, etc. Until we see the DCP [digital cinema package] and the censor certificate, we won’t be able to think of anything else.