Dhaakad will be directed by first time filmmaker Razneesh Ghai aka Razy.

Kangana Ranaut today (6 July) announced her upcoming action thriller titled Dhaakad. The actress shared the poster of the film, which will hit the big screens in Diwali 2020. The film will be directed by first time filmmaker Razneesh Ghai aka Razy.

The poster shows Ranaut holding ammunition in both hands, all geared up for a fight. She is in the middle of what looks like a battlefield with things on fire in the background.

Dhaakad will be Ranaut’s first contemporary action film. Ranaut did do a lot of action in the period film, Manikarnika: The Queen Of Jhansi (2019). Dhaakd is one of the rare out-and-out action films that has a female leading the cast. 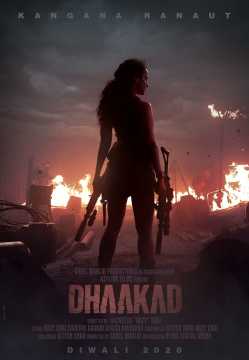 With Karan Johar's Takht also being released in Diwali 2020, Dhaakad will see an interesting clash at the box office. Takht is a multi-starrer which has a long line-up of popular actors like Ranveer Singh, Alia Bhatt, Kareena Kapoor Khan, Vicky Kaushal, Bhumi Pednekar, Janhvi Kapoor and Anil Kapoor.