Both Amitabh Bachchan and Ayushmann Khurrana completed their portions of the comedy, set in Lucknow.

Shoojit Sircar’s comedy Gulabo Sitabo has completed filming. Both lead actors, Amitabh Bachchan and Ayushmann Khurrana, announced they had completed their portions on the film.

Bachchan completed his part as a grumpy old man over the weekend and shared on his personal blog that he glad to be rid of the unlikeable character.

He wrote, “Finally this old grumpy, with the flood inspector pyjamas and the telescopic glasses goes... rid eventually of this horror!” 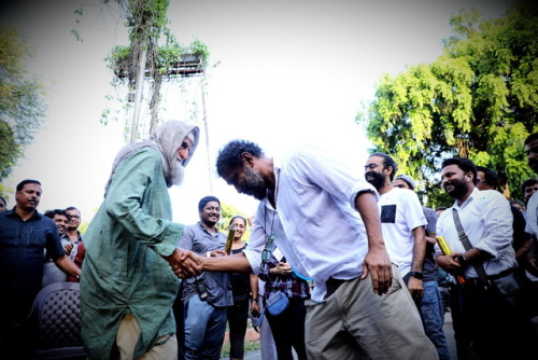 “It’s been a tradition now with this generation to applaud the last day of work.. it never was this before, but it feels more like a relief from the artist, his tantrums his idiosyncrasies, his temperament his fluctuating moods, pet paroxysms demands and generally unwanted behaviour... all of which they have found in me, and now rejoice my departure,” the veteran actor elaborated in his rambling style.

Bachchan donned a prosthetic nose and changed his look, once again, for the film. Gulabo Sitabo, shot in writer Juhi Chaturvedi’s hometown of Lucknow, had a schedule of nearly 50 days.

A few days after, it was Khurrana’s turn to close down the film. He gathered with the large crew for a celebratory photo.

The comedy is said to revolve around an old set-in-his-ways landlord, played by Bachchan, and his errant tenant, played by Khurrana.