We are interested in bringing second season of Aani Kay Hava?: Umesh Kamat


The first season of the web-series has six episodes, each being around 20 minutes long.

Umesh Kamat is reuniting with his wife and actress Priya Bapat on the big screen after six years in the web-series Aani Kay Hava?, that will stream on MX Player. The last time they acted together was in Time Please (2013), directed by Sameer Vidwans.

During an exclusive chat with Cinestaan.com, Kamat said that after Time Please, the two had decided to take some time off before working on another project together, even though they loved working with each other. The couple rejected a number of films after Time Please. “We were offered many such projects. But honestly we didn’t like them from inside, so we didn’t do any of them,” he said. Finally, they got a script that both loved.

“It took a bit too long,” he said. “But we got a good project. And we both wanted to work with [director] Varun [Narvekar]. He is a very sensitive and sensible director. We agreed for the project 50% before he even completed the narration.”

Varun Narvekar made his film debut with Muramba (2017), which starred Amey Wagh, Mithila Palkar and Sachin Khedekar. The film went onto become a hit. Aani Kay Hava? is his next project. 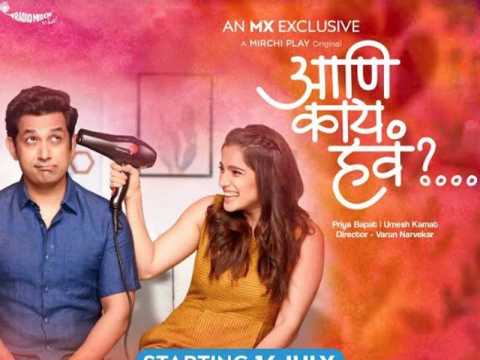 Kamat said that the series is about a couple who have been married for two years. “It focuses on every first in their lives and the joy it provides. Like their first house, car, etc. I feel the series will be relatable for every couple. The title has a dual meaning. When we get something we dearly want, we say what else do we need? The other meaning is that if we get a house, we can what else do we need? We need a car,” he said.

The series has six episodes, each being around 20 minutes long.

When asked if it is different working with Bapat in comparison to other female leads, Kamat was quick to answer. “We consider each other co-artistes,” he said. “Even after finishing the shoot, we don’t comment on each other’s work on the sets. We both are director’s actors so we used to listen more to the director. I was with her just like I am with any other co-artiste.”

Elaborating on why the real life couple is never in a hurry to sign a film together, Kamat said, “We don’t sign films just for the heck of it. We agree for a project only if we naturally like it.”

Bapat has already worked in a web-series before with Nagesh Kukunoor’s City Of Dreams (2019). While, this is Kamat’s first experience on the digital platform, he didn’t feel any difference in terms of the process. “It wasn’t different in terms of the performance. The process was the same. We tried narrating the director’s vision. But the only difference was time. Generally we shoot a film in 30 days. But here we shot the six episodes in around 10-12 days. I feel every medium has a different challenge,” he said.

Going by the promos of Aani Kay Hava? it doesn’t look like a filmi romance and has realism imbibed in it. “Varun is the kind of a director who plays with subtlety,” Kamat said. “In our lives we keep indulging in subtle and real things. Barring few incidents, we don’t behave filmi in our life. This is what we have tried bringing. It is difficult to bring subtlety on screen but there is also fun in it, which interests me.”

While signing off, Kamat shared that the team wishes to float season 2 of the series if the first season is recieved well by the audience. “We are eager to know how the audience receives Aani Kay Hava? If it gets a good response, we wish to bring out another season,” he said.