Asha Bhosle will sing for Waheeda Rehman again after ages


The song is for a project on food and nutrition undertaken by prime minister Narendra Modi.

Asha Bhosle has sung many a song for Waheeda Rehman in the 1960s and 1970s. One of their most popular numbers was the hit ‘Paan Khaye Saiyan Humaro’ from Basu Bhattacharya's Teesri Kasam (1966).

Now, the two veterans are reuniting for another song decades later, though not for a movie. The legendary singer is all set to give voice to the veteran actress for a project undertaken by prime minister Narendra Modi.

A 'nutrition park' is currently in the making in Gujarat. It is a park for children where they will be told the importance of nutritious food in their diet. The park will have various food-related sections.

One of the sections in the park will be called ‘Maa Ki Rasoi,’ which, as the name suggests, will highlight the importance of home-cooked food for children. This section will have a video song featuring Waheeda Rehman and the song will be sung by Bhosle.

Bhosle recently recorded the song which is titled ‘Maa Ki Rasoi’. The song is written by filmmaker Mahesh Tillekar, who has also directed the video, and set to music by veteran composer Ashok Patki.

Waheeda Rehman, who is in her eighties now, is no longer very active in cinema. Her latest appearance on the big screen was as the mother of Kamal Haasan's character in Vishwaroopam 2 (2018). 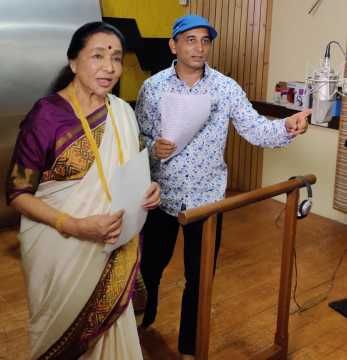