Feluda was more a journey of self-discovery for me, says filmmaker Sagnik Chatterjee


While Satyajit Ray was always more vocal as a filmmaker, it is his work as a writer and illustrator of stories that has resulted in him being celebrated the way he is by fans, believes the docu-feature filmmaker.

Sagnik Chatterjee’s first docu-feature film Feluda: 50 Years Of Ray's Detective has been getting rave reviews and is running successfully in Kolkata’s Nandan theatre.

Primarily a corporate filmmaker, Chatterjee began his career by assisting Govind Nihalani in Mumbai and later joined Sandip Ray’s directorial ventures as an assistant from 2003.

In an exclusive conversation with Cinestaan.com, Chatterjee spoke of the very first moment of inspiration for making the docu-feature and how this has not been an easy journey for him.

Chatterjee also spoke of the various unexpected experiences he gathered in the process of making the film that he holds very close to his heart. Excerpts:

When did you start conceptualizing the film? 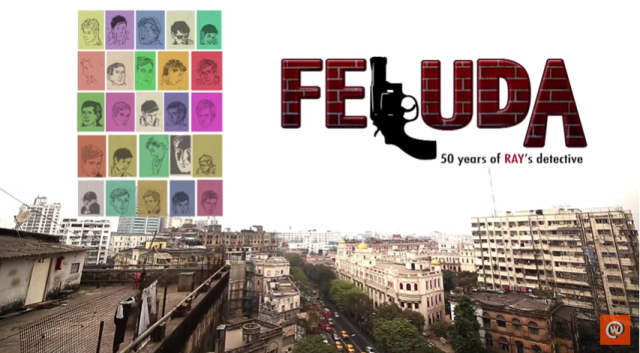 The idea struck me when I started assisting Sandip Ray for Tintorettor Jishu in 2008 and got introduced to Satyajit Ray’s library which had Feluda stories translated in so many languages that it was overwhelming. I had no idea about that. It occurred to me then that Feluda has a presence in books, films, documentaries, TV series, audio books, ringtones, where not!

The primary drive for making the documentary was to explore the reasons for the popularity and overwhelming presence of a fictional character on almost all kinds of communicative platforms.

I did not get much support in the beginning, more because this is a documentary film. I started making the film in 2014; in 2015, the producer backed out. I was left with no choice but to produce the film on my own. It was a lot of struggle to build the project.

We could finally complete the film through crowdfunding of more than Rs15 lakh. In fact, this is the first successful documentary from the eastern region made with crowdfunding. It is more like a people’s film.

Though the film is titled Feluda, it seems to be more the documentation of a personal journey of exploring Feluda’s popularity.

Yes, the film has a narration in the first person throughout so that the audience can relate with the journey. The ‘I’ in the film is not Sagnik Chatterjee. I am more a Feluda fan than director in this case. And the primary audience of the film is Feluda fans too. For the same reason, I have dedicated my debut film to all Feluda fans.

After watching the film, many have told me that they could relate with the experience, that they never had the platform to express this. The film has received overwhelming response for this reason. I don’t think it would have had a similar effect if the narration had been in the third person. I chose both the mode of narration and the dedication quite consciously.

How did you manage to bring the accounts of Ray’s acquaintances, the artistes associated with Feluda films, and Feluda fans together in a single experience?

I was in continuous touch with admirers of Feluda through social media. I had regular discussions with them that enabled me to weigh their knowledge and involvement regarding the iconic figure.

See, I am fortunate to have been born Bengali. As a result, I did not have to read Feluda in translation. The Marathi admirer of Feluda present in the documentary had never seen a sketch of Feluda before she worked with us because in the English translations there are no sketches. However, when I had discussions with her, I got the impression that she had much more knowledge about Feluda than many Bengali readers. She is such an ardent fan that earlier, when Bengali films would not reach the multiplexes of Pune, she used to travel to Mumbai with her mother by train to attend screenings of Feluda films.

How has Feluda remained among the bestsellers since 1965, when there is talk of the drastic decline of readership? It has only been possible because of his ardent fans and the viewers of his films in theatres, irrespective of age. Feluda is alive because of his fans rather than the artistes or members of the film fraternity, who were only part of the artistic creations.

A lot of people asked me why I did not interview Amitabh Bachchan for the film. For me, Mr Bachchan’s interview could have been important but not more than the accounts of Feluda's fans. The film wouldn’t have had similar significance if I had not given importance to the people.

At the same time, the films would not have existed without the artistes. As a fan, I, and maybe you too, would like to know Soumitra Chatterjee’s experience regarding his portrayal of the sleuth. Chatterjee, Sabyasachi Chakraborty and all the other artistes shared accounts which had not been recorded before. Till now, people have either read the stories or watched the films but have hardly had the opportunity to delve into the incidents behind the creations. Hence, I had to bring them together.

Satyajit Ray was always more vocal as a filmmaker than as a writer and illustrator. However, Ray used to receive lots of letters from his fans more for his stories and illustrations. He, too, used to give much more importance to them and hence, every year, he made sure to write an instalment of the Feluda series. He never wanted much publicity for this exchange as it was a sphere of his personal satisfaction. I don’t think anywhere else in the world, any other director is celebrated the way Ray is, till date.

Every year, even 26 years after his death, hundreds of his admirers throng to pay tribute to him on his birth and death anniversaries on their own initiative. I think it happens more because of his writings and illustrations, not merely because of his films.

The film is much longer than a usual docu-feature. Were you concerned about it?

No, in fact I was quite sure of the length from the very beginning. I had two definite goals. One, to release this film in theatres, even if only one. Secondly, I could easily think of the span because of the amount of material I had with me. If you think consciously, you would realize that the interval in the film doesn’t take place out of nowhere. Rather, it was done with a proper plan. The interval takes place when Ramesh Sen gets tired and decides to take a break in his search for Maganlal Meghraj’s house in Benaras.

The entire construction of the film had a detailed framework. I shot for 35 days in the span of two and a half years, but I can clearly say that I hardly discarded footage, except for some portions of the interviews. I did not get into arbitrary shoots and for that I had to engage myself in intense and repeated readings of the material and sources. The pre-production process started in 2013 and took one year to complete.

While making the film, did any information surprise you?

Yes, a lot of accounts and emotions overwhelmed me and surprised me too. There was some information that I was unaware of, like the Dhakay Feluda story was not a creation of Ray himself.

I had the training for feature films and never thought I could step out of that genre. However, Feluda was such a topic that it would not fit into any other format. The entire process for me was kind of a self-revelation since I had not made a documentary before. I clarified to my limited number of team members from the very beginning the features of a documentary film and never stepped outside the format.

There is some interesting animation in it as well.

Yes, Ray’s illustrations are so full of life that it was necessary to use them. I watched a lot of documentaries in the process. I have a habit of watching all kinds of films and documentaries, without any specific demarcation. The sole credit for building this habit in me goes to Sandip Ray. We are omnivorous in terms of watching films and I think this helped me a great deal in making the film.