Santosh Thite, who made his directorial debut with Munda Hi Chahida, explains why he chose a socially relevant subject.

Starring Harish Verma and Rubina Bajwa, Punjabi film Munda Hi Chahida looks at the preference for a male child in most of Indian society. The intriguing poster of the film, which features the leading pair sporting baby bumps, whetted audience curiosity.

The film marks the directorial debut of Santosh Thite, who has also written the script. Munda Hi Chahida has been produced by actress Neeru Bajwa, who has produced two other films in the past.

In an exclusive conversation with Cinestaan.com, director Thite talks about the journey of making the film, which was released on Friday. Excerpts:

The film deals with a very relevant topic, especially for Punjab. You have directed the film and also written the story. How did you think of this story for your first film? 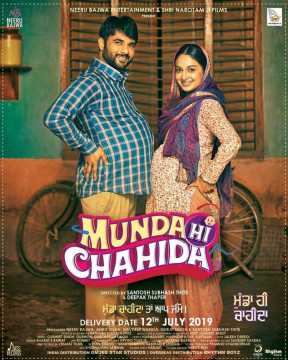 I have an eleven-year-old daughter and have observed the way in which society is obsessed about a male child. It does not matter which section of society you belong to, people just go to such lengths to ensure they have a male child. They visit babas and doctors hoping for a son.

So the film looks at this. It is the story of a man with four sisters, but when his wife is expecting a child, he gets influenced by societal pressures and becomes entangled in the obsession with a male child. And this is the story of almost every household. People say "munda hi chahida [we want a son]" every time a woman is pregnant. Whether it is Mumbai or Punjab, this thought is everywhere.

Neeru Bajwa came on board as producer for this film. Neeru is very selective about her projects. In a recent interview, she mentioned that her family, too, had experienced the male child preference and the societal pressure for it, so everyone can relate to the subject. But how easy was it for you to convince her?

I have worked with Neeruji for 13-14 years, then we started a production company as well and produced a film Channo Kamli Yaar Di (2016), so she had a lot of faith in me. I had discussed this idea with Neeruji and she always felt I should direct the film and said she would produce it. She had so much faith in me and that’s how the film happened.

I also felt that the film is different content wise and thought that instead of making a large-budget film, we should make a content-driven film. She also gave me complete freedom while making the film and said I should make it exactly the way I want.

There has been a perception that only comedy as a genre does well in Punjabi cinema, but we are slowly seeing a shift in content where serious themes are coming up and finding audience acceptability.

That [comedy fixation] has been the perception, but it is changing, and just like content-based films are doing well in Hindi cinema, we are seeing in Punjabi cinema as well that people are appreciating good content. We were very clear that people should understand our film and wanted to present this serious issue in an entertaining way. And people have liked the trailer, so let’s hope they like the film as well.