The Entertainment Journalists' Guild of India wrote an open letter to the producer demanding an apology from the production house, while also stating that Ranaut will be banned from media coverage.

The spat between actress Kangana Ranaut and the media has reached boiling point. Representatives of the Entertainment Journalists' Guild of India (EJGI) wrote an open to Ekta Kapoor, producer of Ranaut's film Judgemental Hai Kya, to demand an apology for her behaviour at the recent song launch. EJGI said they would not cover any event relating to the actress but will support the film and its makers. The actress had launched into an unprovoked scathing attack on a journalist at the event, which later went viral online.

While Ranaut's sister and manager, Rangoli Chandel, took to Twitter immediately to deny any chance of the actress' apology, producers Balaji Telefilms have tendered an official apology on behalf of the rest of the film's crew.

The Entertainment Journalist's Guild of India had written to Kapoor stating, "Since you were present at this event, you must be fully aware of how Ms Ranaut accused Mr [Justin] Rao under the pretext of 'smear campaign' against her. Henceforth, we, the members of the Entertainment Journalists Guild of India (EJGI) demand a written public apology from you, Balaji Films, and Ms Ranaut, condemning the incident and in particular Ms Ranaut's behaviour." 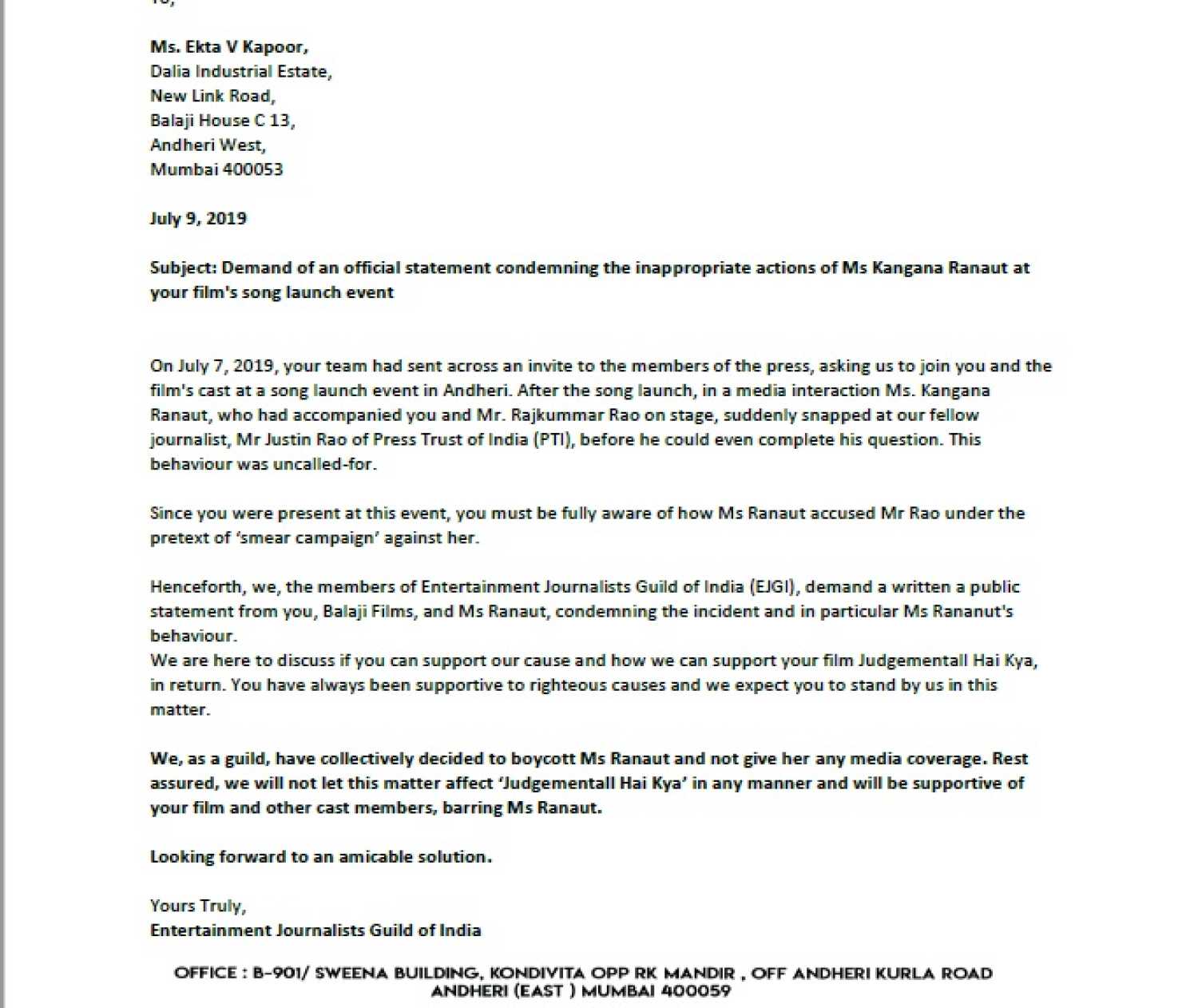 The note stated: "We, as a guild, have collectively decided to boycott Ms Ranaut and not give her any media coverage. Rest assured, we will not let this matter affect Judgementall Hai Kya in any manner and will be supportive of your film and other cast members, barring Ms Ranaut."

Today, Balaji Films responded to the notice by tendering an official apology on behalf of the production house. The apology note reads:

"A lot is being reported about the debate that ensued between our film JudgeMentall Hai Kya's actor and journalist Justin Rao, at the film’s song launch event on July 7th, 2019. Unfortunately, the event took an unpleasant turn. While the people involved in it fairly held their own perspectives but because it happened at the event of our film, we, as the producers, would like to apologize and express regret for this untoward incident. We would like to maintain that our intention was not to disrespect or hurt anyone's sentiments. Our film JudgeMentall Hai Kya releases on July 26th and we urge the media to not let this one incident hamper the team effort that has gone behind making the film."

Meanwhile, Ranaut is yet to issue a statement or apologise for her behaviour. The actress' manager and sister, Rangoli Chandel, continues to write vitriol against the media on her social media account.

Judgemental Hai Kya is directed by Prakash Kovelamudi, and is set to be released on 26 July.