On the 25th anniversary of Rajiv Rai's film (it was released on 1 July 1994), we look at the magical elements that combined to make it the second biggest hit of the year.

Twenty-five years after it was released, Akshay Kumar seems to be feeling nostalgia for his first blockbuster, Mohra (1994). The actor’s move to purchase the rights to the iconic song ‘Tip Tip Barsa Pani’ from the film brought a wave of memories for aficionados of the 1990s decade.

With its mix of potboiler entertainment, two macho heroes, a sizzling heroine, and a fairly impressive plot, Mohra was one of the highlights of a decade that was dominated by romances.

Directed by Rajiv Rai, Mohra was the third part of an unofficial trilogy of thrillers. After Tridev (1989) and Vishwatma (1992), Rajiv Rai decided to opt for a new leading cast. Gone were Sunny Deol and Jackie Shroff; they were replaced by Suniel Shetty and Akshay Kumar.

Both actors were still budding heroes, and were fast gaining a following. Shetty with his bulging biceps had made his debut in Balwaan (1992) while Akshay was setting new standards in martial arts moves with Saugandh (1992) and Khiladi (1992). Mohra was the union of India’s own Arnold Schwarzenegger and Sylvester Stallone.

On the 25th anniversary of the film, we look at the things that went right for Rajiv Rai’s Mohra.

Rajiv Rai went for a different cast from his previous two thrillers, Tridev and Vishwatma. The only one to retain his place was Naseeruddin Shah. While he was never shy of expressing his spite of commercial cinema, Shah did opt for Mohra for its interesting plot.

Shah was accompanied by two fairly new actors with a growing following among the youth. In the face of a rising breed of soft romantic heroes, Akshay Kumar and Suniel Shetty were a throwback to the breed of macho men. Where Shetty reminded people of Arnold Schwarzenegger, Akshay Kumar had already shown his potential to be a leading man in another thriller, Khiladi (1992).

In the midst of this triangle was Raveena Tandon. Young and glamorous, it was Tandon who really defined the 1990s with her performances. Playing the chic journalist Roma, the actress personified the Lois Lane identity in Mohra. It was to be a first of several iconic films that would make her the top heroine of the decade, alongside Karisma Kapoor and Kajol.

In addition, there was a medley of impressive actors from Sadashiv Amrapurkar to the quintessential Bad Man of the 1990s, Gulshan Grover. Throw in Paresh Rawal in drag and you had some moments of cringing hilarity.

While the 1990s is infamous today for some over-the-top cinema, it did have a formula for commercial success marked out. Rajiv Rai’s film was a fun potboiler. From an innocent man jailed for someone else’s crime, drug syndicates and corrupt policemen to plentiful action and comedy and a delicious twist at the end, Mohra was a proper Hindi drama.

Aside from its impressive action sequences, the film had Naseeruddin Shah pulling the wool over the audience's eyes with his blind act. Indeed, it was Shah's quiet, menacing personality that added to the thrill of the plot.

Although Shah was reportedly not very comfortable doing the songs for Mohra, he still earned praise for his performance in the film.

In a decade dominated by melody, Mohra was an album replete with hit songs. Composed by Viju Shah, the album went on to sell more than 80 million copies at a time when social media was not even invented.

While he never received much credit for his work then, Viju Shah’s compositions have outlived their time, finding their way into remixes for a new generation. The composer had already worked with Rajiv Rai in Tridev and Vishwatma. With Mohra, he went a step further by building an album that was filled with rhythm and disco influences. 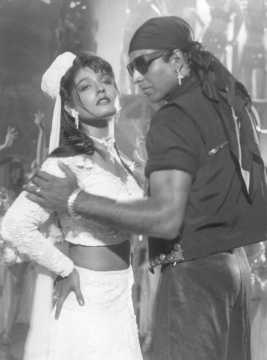 While Akshay Kumar might be focusing today on 'Tip Tip Barsa Paani’, it was the disco number ‘Tu Cheez Badi Hai Mast Mast’ that truly hit the scales on the film’s release. The catchy song became the anthem for the nation, fuelled by inspired advertising jingles. The song itself was inspired by Nusrat Fateh Ali Khan’s 'Dam Mast Qalander'.

Another song, 'Na Kajre Ki Dhaar', was originally composed by Kalyanji-Anandji for another film which was shelved. Originally sung by Mukesh, the song was another successful hit for Pankaj Udhas and Sadhana Sargam.

But the most memorable song, visually, was ‘Tip Tip Barsa Paani’. From its opening signature to the sight of Raveena Tandon in sensual yellow saree, the song proved to be iconic in more ways than one. The song established Tandon as the dream girl of a generation.

The album earned Viju Shah his second Filmfare nomination for Best Music Director. But it was not until Gupt (1997) that he won the trophy.

With all four elements combining well, Rajiv Rai delivered probably his biggest success in the film industry. The film was the starting point for the Akshay Kumar–Suniel Shetty combination. The two actors would team up for several films, before branching out as solo leads.

Akshay Kumar also had a very successful partnership with Raveena Tandon as his heroine in films like Main Khiladi Tu Anari (1994), Khiladiyon Ka Khiladi (1996) and Barood (1998).