We wanted to create an experience: Ridham Janve on his debut feature The Gold-Laden Sheep & The Sacred Mountain


Ridham Janve, whose debut feature has been doing the rounds of festivals, explains why nature is not used as a mere backdrop in the film but is a character.

Incorporating myths and legends of the Gaddi community, Ridham Janve’s debut feature The Gold-Laden Sheep & The Sacred Mountain explores the realm of the supernatural, echoing the belief systems of the community and its nuanced relationship with the mountains.

The film is in the Gaddi language and has travelled to various film festivals in the country.

Talking about the context and location of the film, Janve said he and his friend Akshay Singh had lived in a few villages in the Kangra valley in Himachal Pradesh for a while. They were there to write and they lived with the Gaddi people and slowly began understanding their culture.

"We made lots of Gaddi friends, got to know a lot of Gaddi anecdotes, stories, their belief systems around the mountain, about life in general," the filmmaker said. "We would undertake a lot of treks with them."

It was during one such trek that Janve and Akshay Singh came up with the idea for the film. It took them only 2-3 days to finish the script and then they began to look at the production, crew and other details.

"In the film you only see the shepherds and their life is really unique and spectacular," the filmmaker said. At its heart, the film is a philosophical contemplation, a hard look at the human condition wherein one desires to prove oneself. 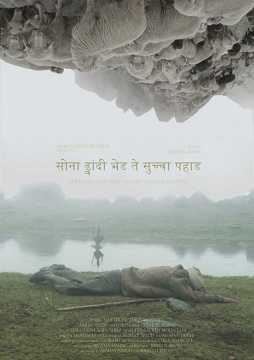 Speaking of this aspect in the film, Janve said, “That is the most real thing in human beings, that’s how we have reached this far, through that desire. So, in a larger meta-way, this is a film about that, which we were very conscious about. It is about the mountain, the plane crash, the shepherd and the search, but what is this search and why do we need to search for something? Also, what happens when something external comes into this world? What is the treasure? The treasure is an idea, a thought.”

The film marks a sharp departure in its portrayal of nature. Nature in the film is not benevolent or passive. Instead, the mountain is a character and nature is replete with dangers and a sense of foreboding, a stark contrast from the way in which mesmerizing landscapes are usually portrayed.

“In most of the films that we see, nature is used as a backdrop," Janve explained. "But in our case, it’s not a backdrop. It’s not set in the mountain, it is about the mountain. So it was, of course, conscious, but it didn’t strike me that we were not using it as a backdrop, it was just how we had conceived it.

"We knew it’s the mountain that’s alive. We have trekked a lot on that mountain. Once you are up there, you start understanding, not just believing, why the people have such a deep connection with the mountain and where those beliefs are coming from.

"There it’s just about just that place. Everything is so evident and all these beliefs automatically come true. I mean, I have seen magic happening there lots of times.”

Speaking about the choice of shots, especially the choice not to use ‘good-looking shots’ that create a romantic view of the landscape, he said, "There are two or three different factors. One is the aesthetics and the form. In our case, we devised the form from the mountain itself — in the perspective of things, how it takes time to reach somewhere — so the form comes from there.

"Another thing is constraints. Constraints play a really important role in your film form. This film form happened because I was working with 'non-actors'. I cannot go after someone and take the same shot again. The weather would change any moment. So I knew we had to do one-shot scenes, because I may not get the chance to get that scene again.

"So all these things play a very important role in the film form. So one is the basic idea of aesthetics and the next is constraints. And everything was very conscious because, ultimately, we wanted to create an experience. So the conventional film form would not have worked in any case.”

Janve is a film graduate from the National Institute of Design, Ahmedabad. His short documentaries and fiction films have been screened at various international film festivals. His previous film was selected in the International Film Festival of India and also represented India at the SAARC film festival 2015 in Colombo.

The Gold-Laden Sheep & The Sacred Mountain was premiered at the MAMI Mumbai Film Festival where it won the Silver Gateway award.