Actress Kangana Ranaut is not one to walk away from a fight. After keeping quiet for a few days, the feisty Ranaut has hit back at the aggrieved Manikarnika: The Queen of Jhansi (2019) co-director Radha Krishna Jagarlamudi, better known as Krish. She has said that she had no role in the creative calls. Krish, in an interview earlier with an entertainment portal, accused her of high-handedness and said he did not "leave" the film as widely publicised in the media.

Ranaut’s sister Rangoli Chandel shared screenshots of Ranaut's text message to Krish. In the messages, Ranaut has said she did not take any creative calls. The actress has claimed that it was a producer-distributor Zee Studios that had disapproved of the initial film edit by Krish.

Manikarnika: The Queen of Jhansi is produced by Zee Studios, Kamal Jain of Kairos Kontent and Nishant Pitti.

“When Mr. Goyanka [Punit Goenka, MD, CEO, Zee Entertainment Enterprises Limited] saw the film that you made, he said he won’t give his logo to it, and asked to shoot the film all over again [sic],” says the text message.

The Manikarnika actress added that they were expecting a few days work, but the film had to be reshot over 45 days again.

“After [the] studio screening and meeting with Zee team, Mr. Parsad [writer Vijayendra Prasad] and Mr. Joshi [referring to lyricist-dialogue writer Prasoon Joshi] wrote the material to be shot. I have nothing do with the writing so please stop accusing me of writing stuff [that] never happened. It’s the writers’ call and their business. They wrote and that’s how the money got sanctioned to Kamal [Jain]. They spent extra Rs20 crore to clean the mess as they call it [sic],” added Ranaut. 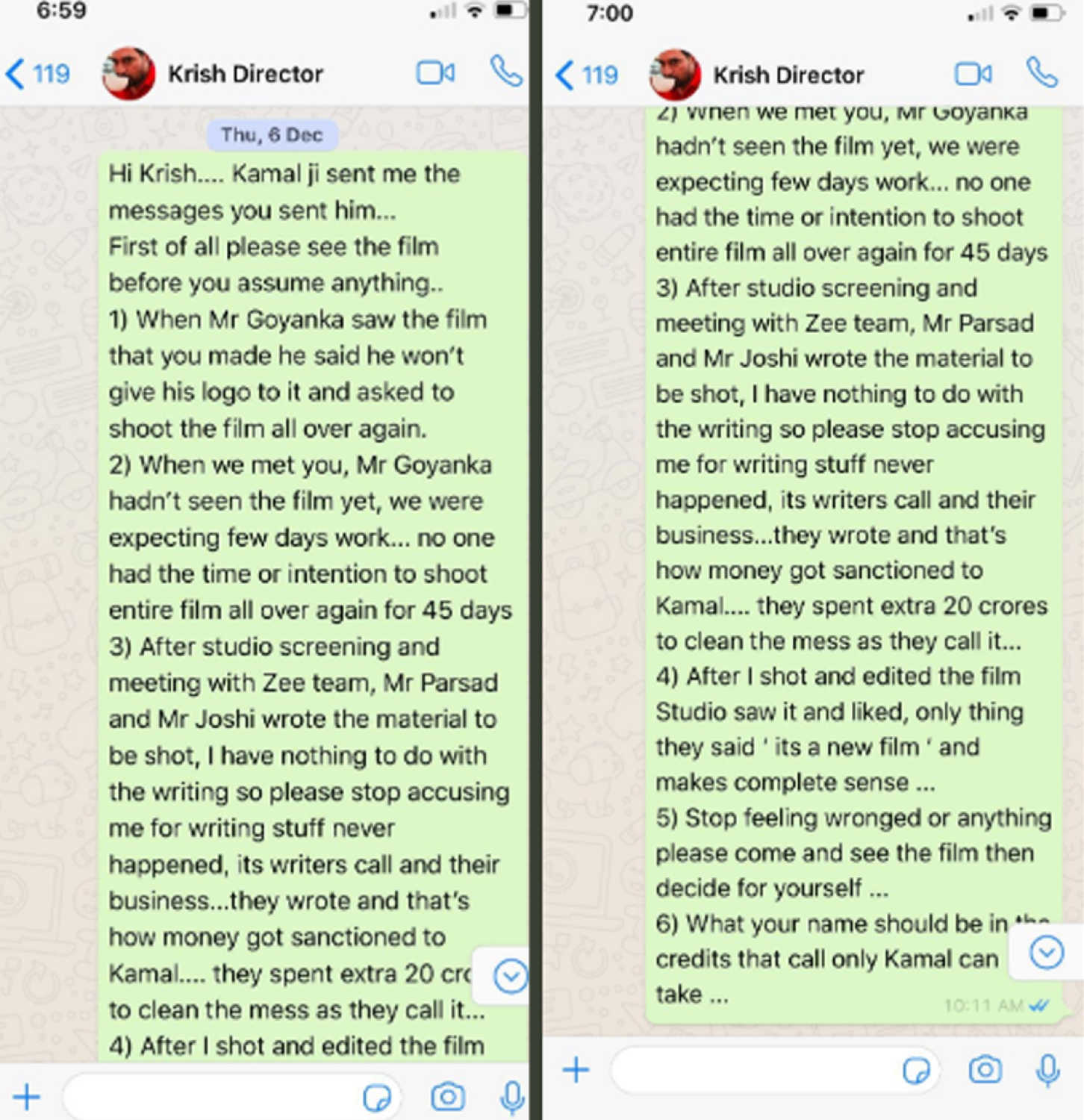 According to a source close to the film’s unit, Krish had shot the film for 60-65 days and thereafter the film was reshot for 40-45 days. “Zee Studio had not liked the first edit by Krish. They had threatened to backout of the film. Kamal Jain had to persuade Zee to not backout. The production cost for the re-shooting was borne by Kamal Jain, only then did Zee [Studios] drop their threat,” said the source.

Krish had alleged that Ranaut cut out significant portions of the scenes shot by actor Atul Kulkarni and blamed her for removing actor Sonu Sood from the film. Ranaut allegedly felt that Sood’s character would undermine her presence in the film. Sood was replaced by actor Mohammed Zeeshan Ayyub for the role of Sadashivrao Gangadhar. Kulkarni played the character of Tatya Tope.

In an interview to entertainment portal Spotboye.com, Krish claimed that Kulkarni and Mishti's roles were cut significantly. The latter played the role of Kashibai.

According to the source, Ranaut didn’t chop anybody’s role to undermine their presence. “Look, nearly the first half of the film was entirely reshot. So you can imagine why it took 45 days to reshoot. Krish had shot too many war sequences. Tatya Tope was having his own battle, while Manikarnika was involved in a different battle. The film was getting too lengthy. The writer Vijayendra Prasad himself had not liked the first edit. He said this was not going to be a good film,” said the source.

We reached to out Vijayendra Prasad, but the veteran screenwriter refused to comment on the controversy. However, he praised the film and Ranaut.

“I am happy that the picture is receiving rave reviews from critics and audience... and Kangana’s hard work got its due recognition,” Vijayendra Prasad texted Cinestaan.com.

In her message to Vijayendra Prasad, Ranaut has claimed that the producers didn’t want to give Krish any credit, but it was she who insisted that he should get his due.

“Kamal Jain, Zee Studios nobody wanted to give Krish director credit. They are so upset with him,” wrote Ranaut. "I put my foot down and told everyone that we will give credit to Krish. I fought for him only because I want no negative PR for this film,” said the text message to Vijayendra Prasad.

She also pointed out that a lot of action sequences had to be reshot. “Action also had a lot of blunders. They had to call Nick Powell [Hollywood action director] and reshoot a lot of action with him in second unit [sic]," said the text message.

In her final point to Krish, the actress asked the director not to complain. “After I shot and edited the film [Zee] Studio saw it and liked it, the only thing they said, 'It’s a new film and makes complete sense'. Stop feeling wronged or anything. Please come and the see the film and then decide for yourself,” the Manikarnika lead actress told Krish. 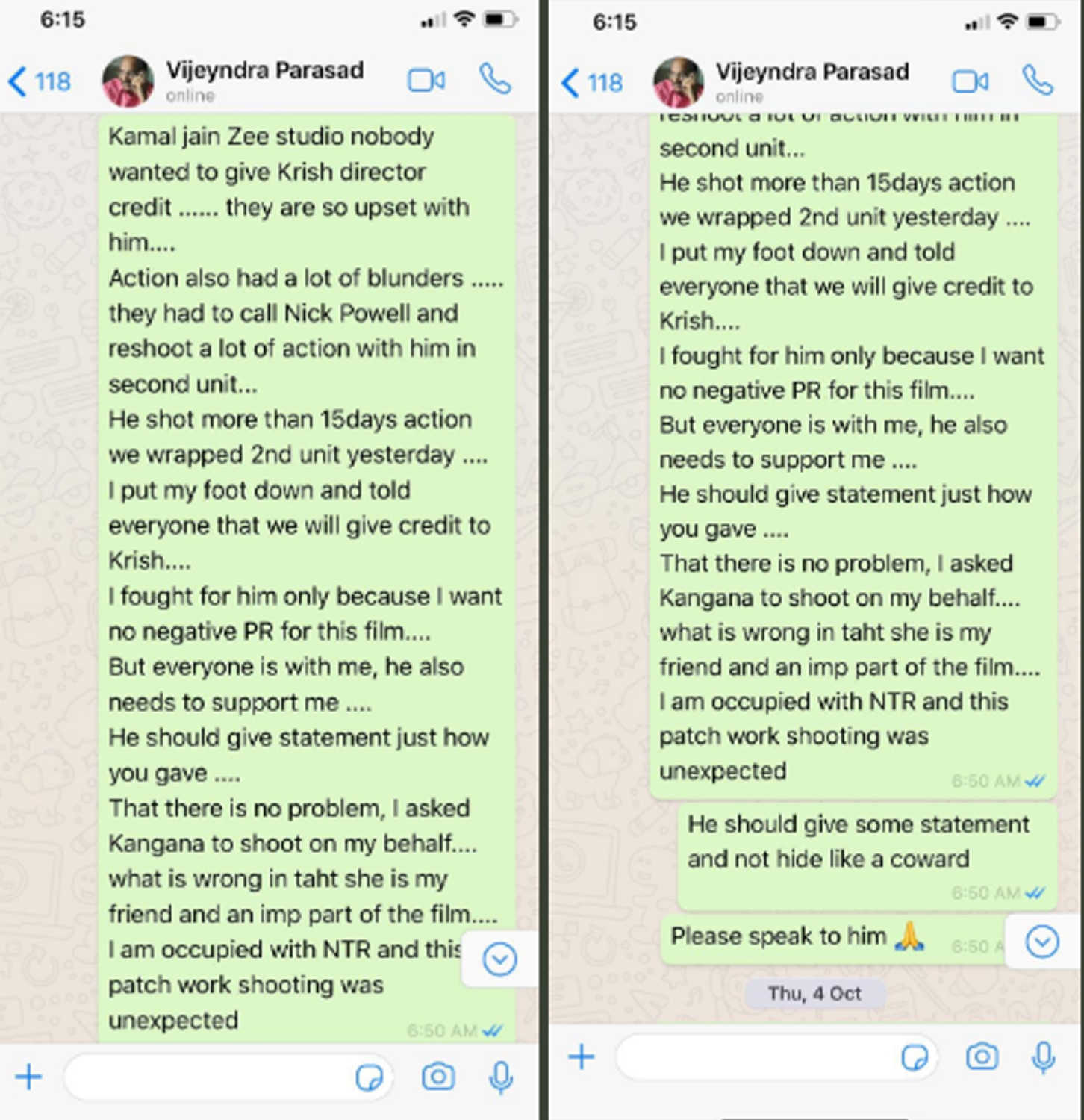 Tweeting about Ranaut's response to his allegations, Krish said: "I'm confidently saying that everything Kangana has written on those whats app messages when I've questioned her, are complete lies and pre prepared, as she has foreseen that this day will come [sic]."

I'm confidently saying that everything Kangana has written on those whats app messages when I've questioned her, are complete lies and pre prepared, as she has foreseen that this day will come.

Krish also shared a WhatsApp screenshot of a message by editor Suraj, who worked on the film, but was later replaced. Rameshwar S Bhagat is credited for editing and post-production in the film.

This is from the editor who edited n later replaced.. the question is not about who shot how much., but its about proceess which everything has been done with ulterior motive n with a poor taste. Pls realise ur lies r making things worse pic.twitter.com/QeA5aCDWtS