There is a lack of energy across the board and it brings the track down.

Indra Kumar’s Total Dhamaal brings together Anil Kapoor and Madhuri Dixit after Lajja (2001). The film’s makers have released the first song 'Paisa Paisa', which is the remake of Kishore Kumar's popular number from Subhash Ghai’s film Karz (1980). Now, given its usual plot, the 'Paisa Paisa' song is apt for a comedy franchise film like Total Dhamaal where the principal characters are all on the lookout for hidden cash. However, the new song is underwhelming.

The original song was penned by Anand Bakshi, scored by Laxmikant-Pyarelal and crooned by the evergreen, legendary Kishore Kumar. Now, it would be wishful thinking to hope an artiste can match the magic of Kishore, and so the voices used don’t cast a spell on us.

At under two minutes, the song simply offers fresh intro lyrics, and sticks to the original for the remainder of the track.

Gourav-Roshin have created fine pop tunes for the intro music. Once the main verse plays out, you wonder what else have the composers and lyricist Kunwar Juneja added.  The remake is contemporary, but it pales before the riveting original composition by Laxmikant-Pyarelal.

Dev Negi and Subhro Ganguly are the lead male voices, and Arpita Chakraborty chips in with the 'la la la' for actress Madhuri Dixit. Negi, Ganguly and Chakraborty do a decent job, but perhaps the remake would have better appeal if some of Kishore's original vocals were retained. 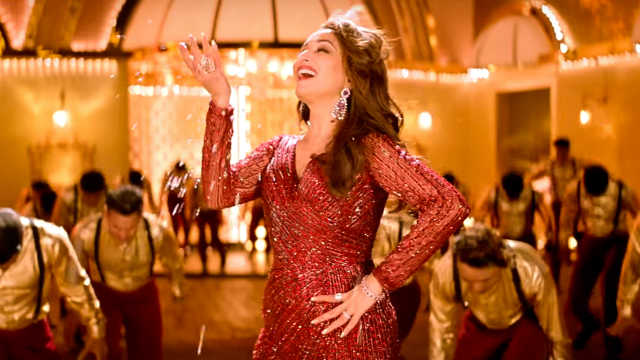 As for the visuals, it is natural for Dixit to take centrestage. The actress looks like a million bucks, but is not given fitting choreography by Ranju Verghese.

The song brings out the monetary greed of Dixit, Anil Kapoor, Ajay Devgn, Riteish Deshmukh, Jaaved Jaaferi, Arshad Warsi and the other characters. For a pacey track, it needed swifter moves. There is a lack of energy across the board and it brings the track down. The all-blue costumes and neon lights don't help brighten the mood either.

If we leave the original song aside, 'Paisa Paisa' has a limited appeal, even for a pop music lover.

Total Dhamaal will be released on 22 February.

Watch both the songs below: