The film stars Swapnil Joshi in the role of a fictitious character named Sachin.

Shreyas Jadhav was once a part of the second division of the English county cricket team Yorkshire, the same county for which India’s cricket legend Sachin Tendulkar played. Interestingly, his directorial debut Me Pan Sachin is not only about a character named Sachin (Swapnil Joshi), but also has references to the former cricketer.

The co-incidences don’t end here. Joshi’s character in the film dreams of playing at London’s iconic Lord's Cricket Ground. Jadhav thought of making a film on cricket when he visited the stadium while his last film as producer, Baghtos Kay Mujra Kar (2017), was made.

“It was during my visit to Lord's that I started thinking how cricket and cinema could be merged in a story. Being a cricketer myself, I consider Sachin Tendulkar as god,” he said during a conversation with Cinestaan.com.

As cricket was always in his blood, it was natural for him to take it up as a subject for a film. He was pleasantly surprised when Joshi immediately agreed for the film. “It took me a year to write this film. I then met Swapnil Joshi. He realized that this is not just an ordinary or regular story. He straightaway said that we should do this film. It is a big thing that a big star like him trusted a first-time filmmaker like me,” he said.

They had a 100-day fitness programme for Joshi with Vishwas Walavalkar. He played for India A and is also known for his acts in the Vijay Manjrekar Single and Double Wicket tournaments that used to take place at Mumbai’s Shivaji Park ground in the 1990s. “He wonderfully trained Swapnil. My only concern was that he should lose weight. He fully followed it.”

Jadhav added that it was necessary to give Joshi proper training in cricket as there are scenes where he has to play with cricket gear like gloves, pads, etc. “We had to ensure that it shouldn’t look fake. I didn’t want to use a dummy. We have shot a proper cricket match which people will enjoy,” he said.

The story of Me Pan Sachin takes place in two eras — 2000 and 2019. The film is about a character who had to give up cricket and his dream of playing at Lord's following a tragedy. Kalyanee Mulay of Nude (2018) fame is cast as Swapnil’s wife in the film, while Priyadarshan Jadhav plays his best friend. 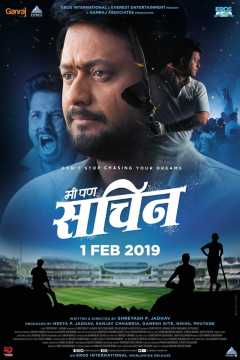 Shooting the cricket scenes was challenging. They used to shoot with a five-camera setup and manage hundreds of villagers. “The biggest task was to manage all this within the budget of a Marathi film,” added Shreyash.

But the real challenge was editing the cricket match scenes since they had around 55 hours of footage. Out of this, he had to show only 15-20 minutes in the film. “After watching every shot and going through all the process I am finally ready with the film,” he added.

Apart from being a producer and director, Jadhav is also a rapper. He shared the mic with Hariharan, Leslie Lewis for the rap song ‘Oho Kai Zala’ from his production Online Binline (2015).

Me Pan Sachin will be released on 1 February.