25 years of Raja Babu: What worked for the Govinda-Karisma comedy?


In a fairly predictable family drama, director David Dhawan packed a masala film with the right dose of comedy, romance and popular music that made Raja Babu a hit.

Family dramas ruled in the mid-1990s. It was when Govinda found his space as an ideal family hero. The actor was unperturbed by the choices of his peers. Often his films gave his audience a sense of deja vu, but Govinda fans didn’t mind it. From Coolie No.1 (1995) to Anari No. 1 (1999), Govinda was always the Hero No. 1 (1997).

Govinda began his career with a couple of hits Love 86 (1986) and Ilzaam (1986).  However, once he teamed up with his favourite director David Dhawan, it changed their careers. First came Shola Aur Shabnam (1992) and the blockbuster Aankhen (1993) followed. Raja Babu was not an action, but a family drama. Their early success made them popular with the masses, and Raju Babu just cashed in on the goodwill. It was a remake of the director-producer-actor K Bhagyaraj’s Tamil film Raasukutti (1992).

Raja Babu was a story about a spoilt brat, Raja who had no goal in life. His favourite pastime is getting himself clicked in fancy costumes, like a film hero, policeman, lawyer or doctor.

Raja falls in love with Madhubala (Karisma Kapoor). The girl is shown Raja’s photo dressed as a lawyer and they are about to be married. Only a few days before the marriage, she learns that her fiancé is a school dropout and jobless. Madhu then slams Raja’s parents for not disclosing his true identity.

The twist comes in when Raja gets to know that he is actually an orphan who was adopted by Kishen Singh (Kader Khan) and his wife Janki (Aruna Irani).

A fairly predictable family drama, but Dhawan packed his masala film with the right dose of comedy, romance and popular music that made Raja Babu a hit.

As Raja Babu film completes 25 years today, we look at what worked for the film. 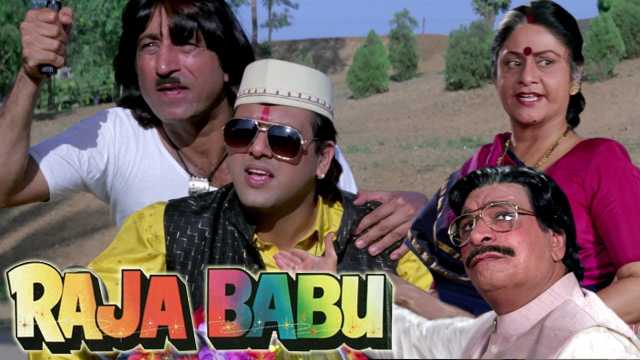 Govinda's films have always been about team effort. Dhawan signed Govinda first in Taaqatwar (1999). The action drama had Shakti Kapoor, Gulshan Grover and Anupam Kher, but no Kader Khan. They and Aruna Irani would come together with Raja Babu. Except Grover, all were cast in positive roles and did well in the melodramatic bits. It was discovered that usual baddie Kapoor could do comedy too.

2. Aruna Irani made the audience cry 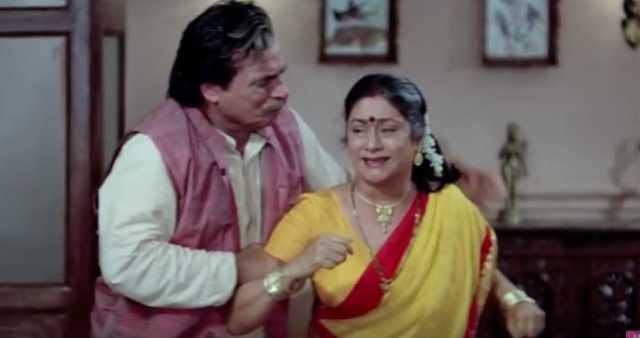 Filmi mothers often lead you to bring out that handkerchief. Nirupa Roy, Rakhee, Nutan did a great job at adding tearjerker moments to a film. In Raja Babu, Aruna Irani got her chance to make the viewers cry. She also had a humourous side. As Raja is not their biological child, she spoils him silly. She ignores his follies and also indulges him in friendly banter. Dhawan had his way of establishing the mother and son bonding and Irani played her part to the T. 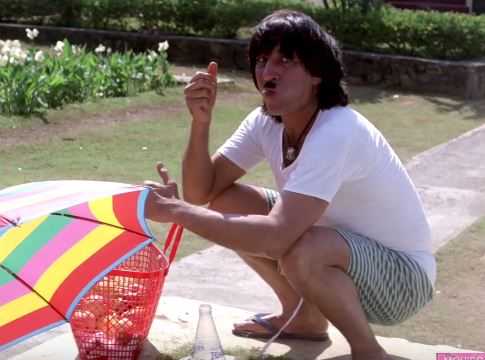 Shakti Kapoor's minimal costumes in Raja Babu provided the humour quotient. He was a lovable idiot, who introduces himself in the sing-song: Nandu sabka bandhu (Nandu, everybody’s friend). Nandu's clothes, Chaplinesque moustache, and squeaky tone made him a popular character then. Another line 'Samajhta nahi hai yaar' was generously mimicked. His reaction to the pictures of beachwear-clad models in the photo studio scene is appalling now, but made him quite likeable when the film came out.

Composer duo, brothers Anand and Milind Shrivastav were much sought after in the 1990s, especially for composing tracks for masala films. Their collaboration with lyricist Sameer led to some memorable tunes in Hindi cinema. The trio gave hits like 'Pak Chik Pak Raja Babu' and 'Mera Dil Na Todo' for Raja Babu. The edgy ‘Sarkai Lo Khatiya’ track by Kumar Sanu and Sushma Shrestha (better known as Poornima) was quite a hit too. The songs struck a chord with the masses and many of them have a strong recall value even today.