The makers of the film, E4 Entertainment, released a statement suggesting they were 'not at all happy' with the final version created by 8 Studios.

Two days after the story of the Tamil remake of Arjun Reddy (2017), Varmaa, broke in the media, the producers of the film, E4 Entertainment, have released a statement about reshooting the film completely. The lead for the film, Dhruv, is likely to stay on, although there will be a change in the director and the remaining cast.

The film, featuring Dhruv Vikram, was being directed by Bala. The film's teaser was released in September last year. Earlier this week, there were reports of the film's release date being pushed owing to the lack of clearance by the Animal Welfare Board. However, E4 Entertainment has now released a statement clarifying that they are "not at all happ" with the final version produced by 8 Studios.

The statement reads, "We at E4 Entertainment are not at all happy with the final version handed over to us and due to various creative and other differences, we have decided to not release this version."

It goes on to say, "Instead we will start afresh, and shoot a new Tamil version of Arjun Reddy with Dhruv as the main lead by staying true to the soul and intention of the original." 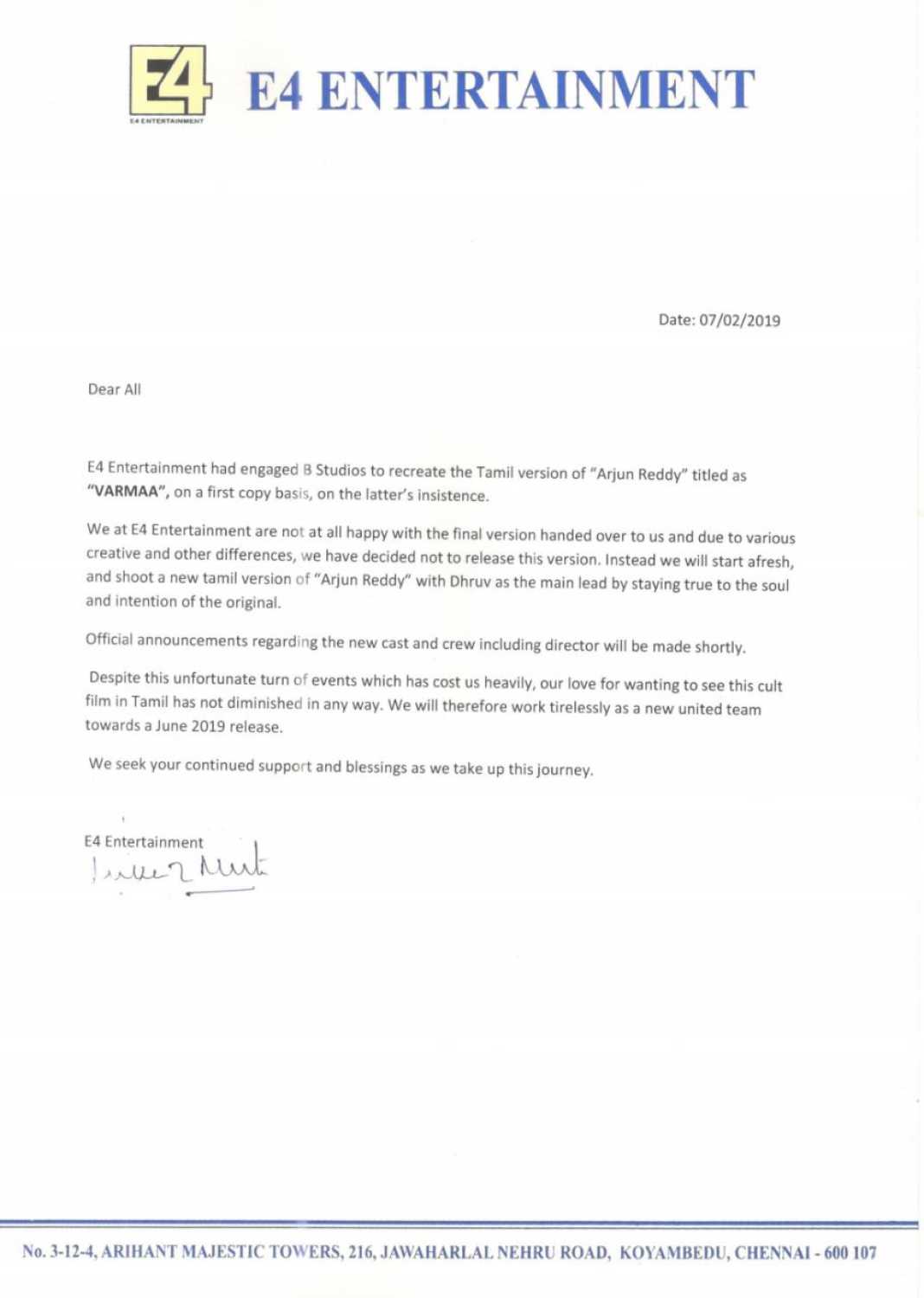 Varmaa is a remake of Arjun Reddy, Telugu film industry's 2017 hit. The film, featuring Vijay Deverakonda and Shalini Pandey, was directed by Sandeep Vanga. The film is also being remade in Hindi, with Shahid Kapoor and Kiara Advani in the lead roles.

The decision to reshoot might prove expensive to the production house, since it suggests a complete overhaul of cast and director. It also suggests that Megha Chowdhury will no longer essay the lead role, although Dhruv Vikram is likely to continue with the character of Varmaa. The producers have promised a new cast and director announcement 'shortly'.

The producers have not asked for a delay in the release schedule. The statement reads, 'Despite this unfortunate turn of events which has cost us heavily, our love for wanting to see this cult film in Tamil has not diminished in any way. We will therefore work tirelessly as a new united team towards a June 2019 release."

The teaser to the remake was released in September 2018 to a lukewarm response.