Ahaa Re celebrates depth of love through many struggles: Ranjan Ghosh


In a heart-to-heart chat with us, Ghosh recounted his journey of conceiving the script and turning it into a film.

Ranjan Ghosh’s film Ahaa Re celebrates love in the background of societal conditions and norms. The recently released love story explores the complexities of human emotions in achieving the state of mutual love.

Actress Rituparna Sengupta has not only worked with Ghosh in Ahaa Re for the second time, but has also produced the film.

Bangladeshi actor Arifin Shuvoo has made his debut in Bengali films with Ahaa Re. The film also features Paran Bandopadhyay and Amrita Chattopadhyay in important roles.

In a heart-to-heart chat with Cinestaan.com, Ghosh recounted his journey of conceiving the script and turning it into a film.

When did you start conceiving the story of Ahaa Re?

Actually, it was after my first film Hrid Majharey in 2014, during the time of Durga Puja, I was wondering what should be my next film. My script Iti Mrinalini got produced and then one more was lying which I did not want to turn into a film.

I am a foodie, but I cannot cook. I can only make an omelette. I always try out recipes, but I fail. I thought what if I make a film on a similar topic or about a guy, who loves eating and cooking as well. The idea started from there and I am a romantic person and hence, the idea culminated into a love story.

My ancestors are from Faridpur so I thought that the guy could be from Dhaka or any other place from Bangladesh. The chef to be needed someone from a completely different background as he comes from Bangladesh to India. He meets the woman (Sengupta), who runs a home delivery [service] in Kolkata. As the guy is a Muslim, the lady automatically became a Hindu, reflecting my personal politics to not conform to the societal norms.

In my group of friends, there are many inter-religious and inter-racial couples. I have seen closely how their families are hell bent on separating them just because they are from different religious backgrounds, though they are madly in love with each other. I have always felt that the identities based on religion, caste, creed and colour don’t matter when the love between two people is genuine.

Also, there are so many trials, tribulations and struggles that may come in the way of getting together of two lovers that can be good enough reasons as impediments rather than the externally imposed societal pressure. Once I was done with sketching the characters, I started exploring their journey and realised that the characters would go through a lot of hardships before getting together, which in itself turned into the journey of their story, which would narrate their internal struggle to reach a culmination point. It is a story full of struggle in love, of overcoming their internal conflicts and demons to finally achieve what they want to achieve.

Food and cooking work as the catalysts in their journey. If food is the body then love is the soul. Here, food is the bedrock on which their castle of love is established.

You said you can hardly cook. So did you separately delve into any research before writing the character of a chef?

Yes, I had to learn about the technical aspects and as I told you before that I started writing the script in October 2014, and finished the first draft of the script in March 2015. I take a lot of time in writing the script. Then I wrote the treatment of the story in which I jotted down all my research on how a chef functions. See, the basic emotions of a chef will be the same as any other human beings. But if you observe the film with careful attention, you will be able to find out the research that I have done regarding a chef.

The first draft was ready by December 2015. After writing two more versions of the draft, I narrated the script to Rina Di (Aparna Sen) and she said that this is my most mature script so far. By then, I had started facing rejections from producers because the love story was of a Hindu and a Muslim. 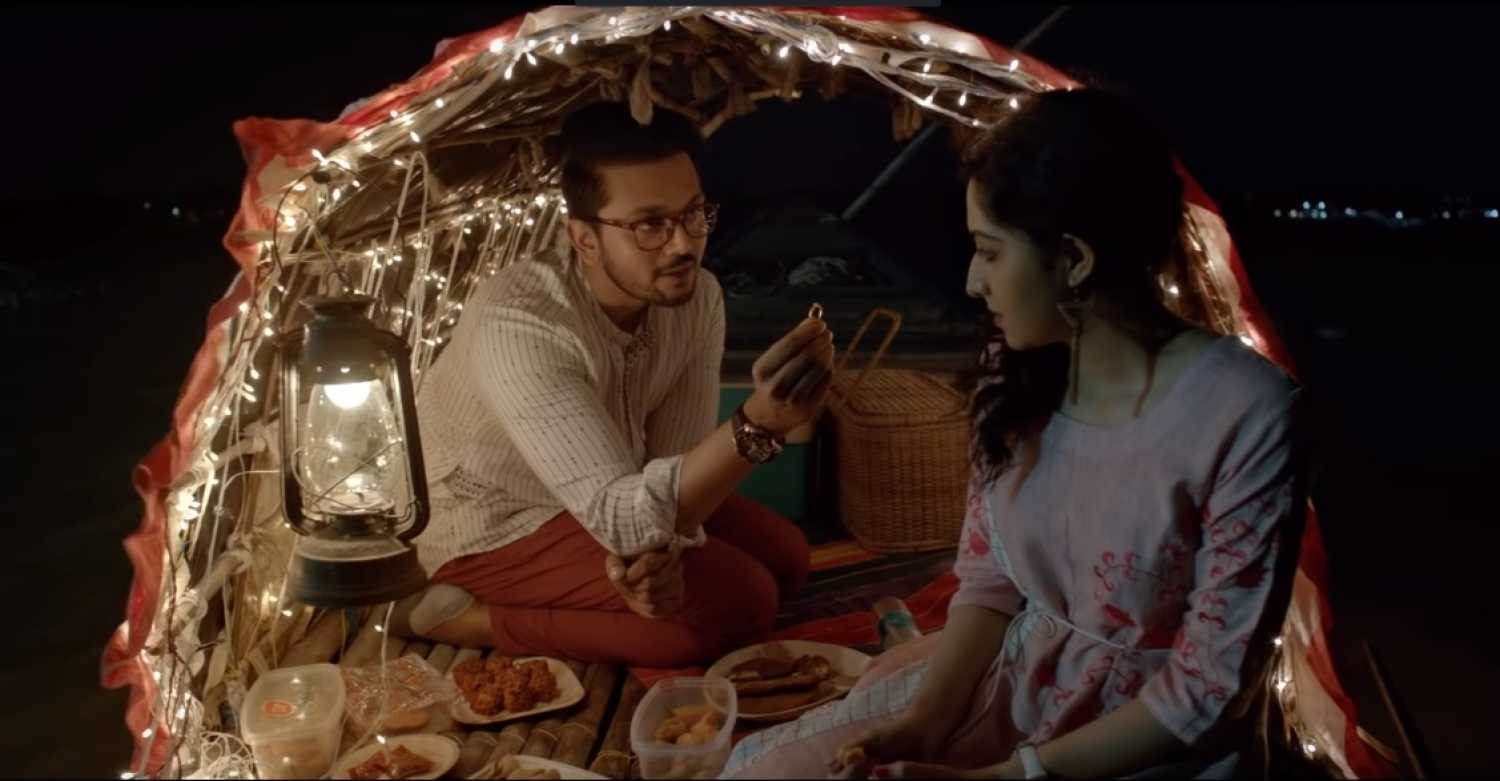 Then how did Rituparna Sengupta agree to produce the film?

See, people are used to a lot of violence when it comes to a love story between a Hindu and a Muslim. Most of the producers could not digest how a Hindu and Muslim can unite without any external impediments. A lot of them suggested to turn Faraz Chowdhury into a Hindu character. But then I could not tell the story I wanted to. By then, I came to know that Kazi Nazrul Islam got married to Pramila Devi and because of their marriage, both of them were excluded from their respective religious communities. During that time, Kazi Nazrul Islam had written a few poems and songs, including Ay Beheste Ke Jabi Ay in which he was basically trying to portray a perfect society.

All these aspects were immensely important for me and I did not want to compromise with them. While discussing with the producers, I pitched the script to Ritu Di for acting purpose in 2017. She really liked the script and agreed to do the film at once. After that she could see that I was not getting any producers and she was in touch with me. By that time, we had finished doing Rong Beronger Korhi (2018) and Ritu Di was already impressed with my work and dedication. She herself sent me to many producers, but most of them insisted on some changes.

Eventually, she asked to not go for any compromise and decided to produce the film herself. She has been a huge support throughout. I wanted to cast somebody from Bangladesh. I could have cast any actor from Kolkata, but the character would have looked pretentious then. So I wanted someone from Dhaka and it took me four to five months to decide on the cast. However, then Ritu Di introduced me to Arifin Shuvoo’s pictures. Then I went through some of his video clips and was convinced that the guy can play Faraz. I worked on his look. We went under a lot of preparation for the film for three years.

How did Arifin Shuvoo agree to work in the film?

He is a very choosy actor. He works in a lot of popular mainstream films in Bangladesh but interestingly, when he got the offer to work here in Kolkata, he precisely showed his interest in the story and the character. He made it clear to me. He did not say yes or no when he heard the story for the first time and expressed his wish to meet me again. Then we met again and he basically wanted to know my interpretation of the character beyond the mere narration. It was a personal interaction. We spent almost four to five hours together and he finally said yes to the film.

I think he has been a revelation and in every screening, people had to mention him and they thanked me for giving them the actor. I personally thank Ritu Di for introducing me to Shuvoo.

You have directed Rituparna Sengupta twice, in Rong Beronger Korhi and Ahaa Re. How has been the experience so far?

Initially, while shooting for Rong Beronger Korhi, I was in awe of her because I had seen her acting in Dahan (1997), Utsab (2000), Paroamitar Ek Din (2000), Mondo Meyer Upakhyan (2003) and Alo (2003). After watching those performances, directing Rituparna Sengupta was quite a daunting task. Firstly, she made me very comfortable. She can impress with her good nature and she has a lot of humanity in her. Then it becomes easier to direct her as she gives the vibe of good friend, who listens intently. I have felt and also probably, most of the people are aware that she is a director’s actor. She can take shape of any container and if the container is good then her act would appear impressive as well.

I had quite a learning experience in Rong Beronger Korhi, which got enhanced in Ahaa Re. I am a very particular director and I know exactly what I want and what I don’t. She has the confidence and conviction in my work and she played along with me. Actors like Paran Da and Ritu Di, don’t need over direction from directors.

These days romantic relationships suffer a lot of insecurities and complications and separation is also not a big deal for this generation. What is your take on that?

What I see these days mostly is that we are going towards a kind of shallowness - a materialistic shallowness to be precise. I don’t find much depth in it. Rather, there is much more show-off. I feel more than the physical contact, a lot of can be said through an exchange of a look. For me love means responsibility, sacrifice and commitment. Ahaa Re is a lot about that. More than the physical touch, touching the heart becomes more important in the film.

Kaushik Ganguly’s Nagarkirtan was also released on the same date. Is it affecting your film in any way?

I think it is an immense honour that my film has released with Kaushik Da’s film. I think for the audience it is a win-win as they are getting to watch two completely different films in terms of style and treatment, but both are celebrating love beyond caste, creed, sex and religion. I don’t think there is a reason why people would not watch one film if they watch the other. I think both of them complement each other.