The filmmaker, who is back with Total Dhamaal, feels bad that Sanjay Dutt and Aashish Chaudhary couldn’t be part of the film.

"To make a comedy you have to have that funny bone in you. Then only you can make people laugh," says director Indra Kumar. In his latest film, Total Dhamaal (2019) the director looks at the lighter side of life.

He claimed that he launched the horror comedy genre in Hindi cinema with Great Grand Masti (2016). “I was the first one to have horror comedy. Unfortunately, to my horror, that film got leaked. And that was no comedy,” Kumar said in sombre, yet funny tone evoking guffaws from the gathered journalists at the group interview.

The prime plot of Total Dhamaal seems straight out of Dhamaal’s book — an old wealthy dying man informs a stranger [protagonists] of hidden cash. In the first film it was Prem Chopra, and now it is Manoj Pahwa. 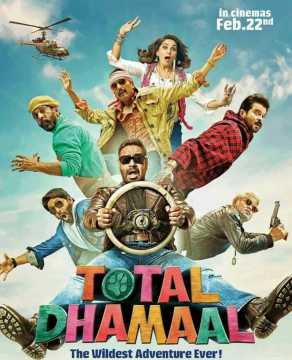 Why would Kumar repeat this plot point in Total Dhamaal?

“With Double Dhamaal, I completely changed the story. People didn’t relate to it. They said, ‘yeh Dhamaal jaisi nahi’ [it’s not like Dhamaal]. So, now I have made this film [Total Dhamaal] like Dhamaal. I think I have thought it right with Total Dhamaal,” explained Kumar.

Total Dhamaal may have similarities with Dhamaal (2007), but Kumar has added a fresh element to it too. Veteran actors like Anil Kapoor, Madhuri Dixit, Ajay Devgn, Boman Irani and Johnny Lever have joined the franchise to make the film a wild and adventurous ride.

Kumar claimed that it was he who cast Devgn, known to be an action hero, in his first comedy Ishq (1997). The director felt that Devgn was better than Aamir Khan in a few scenes in the 1997 romantic comedy.

“I knew that this guy is good in comedy. So, I gave him Ishq. There was this one scene where Ajay Devgn and Aamir Khan are in the bank. They are stunned to find their parents there too and all of sudden they start behaving like crazy men. If you see that shot, Ajay has done a better job than Aamir,” he said.

While there are a bunch of additions to Total Dhamaal, regulars like Sanjay Dutt and Aashish Chaudhary are not part of the third installment. Last year, sources close to Dutt had claimed that the actor didn’t want to be part of any adult comedy. Kumar had rubbished those rumours then.

Kumar revealed that Dutt was very much part of Total Dhamaal, but date issues didn’t allow him to take up the project.

“We were doing this picture together. Ajay and Sanjay both were there, but then Sanjay’s dates were not matching. Had I waited, then it would have taken another year-and-a-half to get the dates of all the actors,” said Kumar.

The director admitted that with Chaudhary it was not an issue of dates. “I feel bad for him, but then there was no role for him here. Maybe, if we have a Dhamaal 4, then I can hope to bring Sanjay and Ashish back together,” the director said.

Total Dhamaal will be out in theatres on 22 February.