Anjum Rajabali’s story and screenplay played a major role in the film's success. On the 20th anniversary of the film's release today (19 February), Cinestaan got talking to Rajabali about the film.

The film was about two stepbrothers, Aftab (Devgn) and Dhananjay (Khan) who belong to opposite camps and hate each other. But they are also on the run together to evade arrest for a crime they did not commit.

Rajabali said he found the inspiration for the story in the Mahabharata. "The Mahabharata is the universe of all stories," the screenwriter, who also chairs the jury for the Cinestaan India's Storytellers Contest, said. "It is clear from the names. One is an illegitimate son, Aftab, which means sun; the other is a legitimate son called Dhananjay, which is another name for Arjun. And the sun was Karna's father.”

In the ancient epic, Arjun and Karna are not aware of their relationship in the beginning. Karna is told about it shortly before the war while Arjun learns the truth only after he has killed Karna.

“But I thought what if the two people knew about each other?" said Rajabali. "As far as Dhananjay is concerned, no son would like to know that his father had had an affair with someone [other than his mother], and Aftab is a reminder [of that],” he said.

He thought of having both on the run. “The younger one resents the older one a lot," he explained. "So the older man has to have done something for which our man [Khan] is in a pickle. But why would he do that? He is not a villain. So, there was that father angle.”

Devgn was signed early on for the film. Rajabali felt he fit the role of illegitimate son perfectly. “For the other one, the first choice was Saif," he said. "He has that urbane persona. This person had to be a misfit in the deserts, villages and violence. Fortunately he liked it [the role] and said he would do it.”

Kachche Dhaage came out at a time when the music album of a film had to be a saleable property in itself. This made producer Ramesh S Taurani put forward a demand which might appear unusual today.

"Mr Taurani clearly told me that I can have all my dramatic elements and he has no problem with that," Rajabali recalled. "However, he needed six songs — four before the interval and two after. He was very clear about that (laughs). He said he needs this to sell the music.”

Rajabali recalled an important moment in the film when the two characters are eating at a dhaba and Dhananjay gets into a brawl. Aftab takes out a gun and asks the miscreants to step back. As he is taking Dhananjay away, one fellow taunts him, ‘Randi ki aulaad [son of a whore].' This hits Aftab.

“When Dhananjay tells him it was just a gaali [cussword]," Rajabali said, "Aftab responds, ‘Maybe to you, but for me this is reality.’ So was their father in a relationship with a prostitute? It leaves a scar on Dhananjay. His resentment against his father and illegitimate brother just grows.”

The film is still remembered for its music, especially the title song, the ‘Dil Dena Hi Penda Hai’ song, and ‘Is Shaan-e-Karam Ka’ qawwali. The makers had roped in Pakistani Sufi music legend Nusrat Fateh Ali Khan to compose the film's album. Rajabali said it meant a great deal to him to be asked to narrate the story to Nusrat Fateh Ali Khan.

The screenwriter revealed that they had initially approached Farida Jalal for the role of Devgn’s mother, Mariam. The name has a lot of significance in Islam where Maria or Mary is referred to as Mariam.

“She is marvellous and a favourite of mine, but she said no only because of this," said Rajabali. "She said the role is very good and strong and it is all about sacrifice. But she wanted me to change the character's name; else, she felt, it would create unnecessary problems for her in the community.”

Farida Jalal asked Rajabali to change the name of the character or the fact that she had to prostitute herself. “I told her that the idea was to show that in the society we live in, even a Mary or Mariam isn’t spared. She agreed, but said only you and I know this in this closed room and she couldn't possibly go around saying this.”

The producers asked Rajabali if he would like to change the mother's profile. Rajabali explained that it was not his ego or possessiveness. It was just that if he changed it, the entire effect would be lost. The producers agreed. The role eventually went to Maya Alagh.

Rajabali had met Luthria through Mahesh Bhatt, for whom he had written the blockbuster Ghulam (1998). Luthria, who is nicknamed Bunty, was associate director with the Bhatts earlier.

“Bunty and I got talking," Rajabali continued. "We got along very well. We met often. He used to come home. I had written a story for a film with the Bhatts, but that didn’t happen. Then we were on our own.”

Rajabali narrated the idea of Kachche Dhaage to Taurani, which he liked. But Rajabali had already promised it to Rajkumar Santoshi. 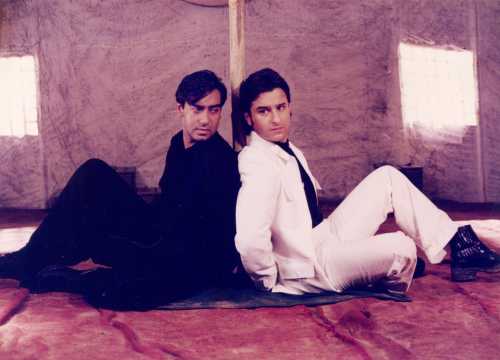 Rajabali then narrated a film called Bangkok to Taurani, which was to be directed by Luthria with Ajay Devgn in the lead. The actor was already friends with the filmmaker. But Taurani found the story too violent.

Rajabali then narrated another one which also didn’t work out as the music mogul found it too dark and intense. Luthria, incidentally, liked both stories.

Then Taurani said he would be happy to produce the story Rajabali had narrated a year ago, which was Kachche Dhaage. “I checked with Rajkumar as I had already committed it to him, but he said go ahead and do it for them,” he said.

When Rajabali was writing Kachche Dhaage, he was holding a full-time job. That meant he could not attend the film’s shooting, except for one schedule in Rajasthan. “Only once I resigned, I started spending more time [on the sets],” he said.

"I was a new, untrained writer. In many ways I was amateurish. It showed in the script of Kachche Dhaage. If I were to write it today, it would be much more solid.”