Filmmaker Sanjoy Nag explains why he cast Soni Razdan in Yours Truly, why he made the film in Hindi and not Bengali, and why he believes Indian cinema has missed out on some brilliant parables by ignoring the lives of the middle-aged.

Soni Razdan in a scene from Yours Truly; (inset) Sanjoy Nag
give your opinion

Sanjoy Nag, born and raised in Kolkata, started out with documentaries before branching out to feature films.

Parapaar (2014), starring Rituparna Sengupta and Paoli Dam and based on a Moti Nandy novel, was his sophomore feature.

Yours Truly is his first Hindi feature film. It tells the story of a middle-aged single woman who lives alone in her ancestral home on the outskirts of Kolkata. Her emotional and unique relationship with an announcer at Howrah station is the focus of the film. 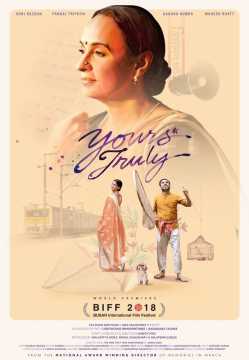 Excerpts from an e-mail interview with Sanjoy Nag:

What inspired this unusual story revolving around loneliness in a middle-aged woman?

Over the years in my engagement with cinema, primarily as a viewer, I have always noticed, more so in India, that protagonists had to fall within a certain age bracket, after which they were relegated to playing so-called supporting characters in the larger scheme of things. This I found extremely removed from the reality of our social and familial space.

I was also keen to explore the life of a middle-aged woman among other templates — their lives, loves and philosophy. Annie Zaidi’s story The One That Was Announced just lent itself beautifully to that space and gave me content that I could translate for the big screen.

I think we have far too long neglected this crucial and important space and therefore missed out on the brilliant parables that could have been born had we indulged in cultivating this critical and relevant territory.

So, after reading the story, I had always dreamt of making a film out of it. Even Aarti Mishra, played brilliantly by Deepti Naval in my debut film Memories In March, falls in this age bracket.

How did you decide on the casting, specially with reference to Soni Razdan whose acting talents have never been explored?

Soni is an extremely talented but grossly underused actor in India, capable of top-notch, world-class performance. Sadly, she has hardly any memorable performance in recent times and all my memories rush back to Saaransh (1984) and 36 Chowringhee Lane (1981).

So I was happy when she readily agreed to do the film. I knew she would nail Mithi Kumar like none other. Seeing her after the first shot, I realized she would take it to a level beyond my expectations. And now, I can safely say it wouldn’t have been possible to do this film without Soni, who surprised herself as well with the brilliant portrayal. Glad I approached her and honoured that she played an outstanding part in my film.

What made you decide to make the film in Hindi instead of in Bengali, though the story is set in Bengal?

I thought this is one demographic space which has largely remained absent in our cinema despite its sizeable presence around us. So as a filmmaker I set out to explore this cultural space, more so in a film where the characters would lend themselves organically well into the ambience where the narrative is based. Every community brings with it its cultural essence, which I wanted to rub and enhance the fragrance, which I thought would make it more rooted.

The sound design plays a significant role, almost like several characters in the film. Were you inspired by any particular film or filmmaker, or did you conceive it yourself?

Frankly, I haven’t seen anything similar to this, and being always fascinated by sound I decided to devise this as a tool to forward my storytelling. We pay scant regard to sound in cinema, specially in India, and I always look for options and methods by which we could use this tool effectively.

So, over the years, while I was living with the script, I was also trying to arrive at templates that I could use as a reference, but soon discovered there weren’t any and therefore decided to go ahead and take the risk of creating one.

I thought sound design in Indian cinema is hardly explored beyond the traditional pattern and is underrated and so there was enough headroom for experimentation.

I was greatly aided by Sukanta Majumdar, our sound designer, who was extremely encouraging and open to such experimentation, along with Madhubanti Bagchi, the debutant background score composer who, with her team, provided the perfect collaborative elements, thereby helping the final aural narrative of Yours Truly get its intended place.

The vocal sound is divided neatly between voiceovers and dialogue, which gives a different dimension to the whole film. How did you think of this unusual strategy?

In Indian cinema we have this watertight notion of hero and villain and they have their own templates. But then these are visual references. So, for instance, certain faces / actors represent the good man on screen while some are projected as bad or villainous.

So I thought why not try and replicate that in the sound space as well, if it was possible to create a bad voice and good voice. Elaborating further, if it was possible for the viewer to imagine and thereby construct images of the two characters, the railway announcer and the tenant’s wife, just by listening to their voices and never seeing them on screen. Whether the viewer could also categorize voices as bad or good even if they have not seen their owners even once on screen.

So far it seems to have paid off, going by the audience feedback, be it in Busan or in India.

How did you direct this film? Did you have workshops before the shoot? Script-reading sessions? Explaining the characterization to the artistes and allowing them to interpret? Giving them specific directions to do a scene in a given way? A blend of all these?

I don’t believe in workshops. I believe in working with competent artistes where the script is a roadmap for them to improvise and find the path to the intended destination.

This path may be pluralistic and I love that, since it opens up multiple possibilities for a director who is greedy to extract the most from the screenplay — at times completely different from what I had in mind initially.

I read the script with them, gather their feedback and answer queries that they might have. Also I am not very rigid about the mise en scène that I might have had in mind during the screenplay stage. More often that not it gets changed depending on the responses to the screenplay at the time of shooting. Also, for me it is an enriching experience where I get to learn from the collective experiences of my cast and crew — be it Soni Razdan, Pankaj Tripathi, Aahana Kumra, Vinay Pathak or Mahesh Bhatt.

Which are the places you chose for the shooting?

The house, which is a character in itself, is in Sheoraphuli, about 30 minutes from Howrah. It took me quite a while to locate this house, a house which I thought was waiting to be a part of this film seamlessly. We also shot in the busy Howrah station, parts of Kolkata and around.

How long did it take from conception to post-edit?

I have been living and growing with this story for about five years now. But in terms of absolute production logistics the entire process took about seven months.

What kind of freedom did your producer allow?

There wasn’t any interference from any of the four producers whatsoever.

How would you, as director, place this film against your earlier films Memories In March in English and Parapaar in Bengali?

Difficult to place one against the other, specially as a director. They tend to have a personal engagement and relationship. It’s the difference in concept therefore that decides the treatment, which intrinsically makes the films different from one another.

What kind of audience are you looking at right now for this film?

I think with varied experimentation in the cinema narratives now being available, the audience is becoming more receptive and, in a sense, evolved to the kind of content outside the straitjacketing template, which gives me and filmmakers exploring similar structures and content hope.

I admit we have some distance to cover, specially in India, but then in this digital age, when films are being screened on platforms like Amazon and Netflix, at least an alternative distributing space is gradually taking shape, which bolsters the confidence to experiment with content.

Parallelly, the film markets at leading international festivals also generate buzz leading to sales and release in those countries.

We shot this film on a 4:3 aspect ratio (all films these days are shot on widescreen formats) because we thought that would heighten and enhance the journey of this introspective character living in a claustrophobic but realistic space.

Stanley Mudda, the director of photography, brilliantly executed this for a film where it was decided to experiment and thereafter create fresh templates to express our collective labour of love and passion.

Also, our editor Sankhajit Biswas needs to be mentioned as someone who spent months assimilating the rushes and arriving at a structure only to change it for something even more exciting. Today when I look back I feel it has paid off.

Finally, Debajyoti Mishra, who composed that only song, has again proved how situation-driven film songs need to be done.