Why just comedy? Men have dominated everything, says Madhuri Dixit

It is not often that female artistes are at the forefront in comedy scenes. So, when a renowned actress like Madhuri Dixit takes up a comedy, you take notice. The actress will soon be seen in director Indra Kumar’s multi-starrer comic caper Total Dhamaal (2019). It is the third film in the Dhamaal franchise.

Dixit unites again with Anil Kapoor. The duo had formed a successful pair in the late 1980s and 1990s. They were last seen together in Rajkumar Santoshi’s  Lajja (2001).

In a group conversation with journalists, Dixit expressed her delight at reuniting with Kapoor and others, spoke about why she picked this film, her take on remixing old songs and much more.

Anil Kapoor, Ajay Devgn, and Indra Kumar. So, isn’t this like a multiple reunion for you?

Yes, even Jaaved Jaaferi and Arshad Warsi. So, Anil and I are working after a long time. I have done three films with Indra Kumar before – Dil (1990), Beta (1992), Raja (1995). If I am not mistaken, with Anil Kapoor, I think this is my 18th film [actually 20]. So, it is wonderful coming back together because the synergies are the same. For me, this is also a different role. This is like a ‘let-your-hair-down' kind of comedy. I have not done that in a while. And the songs, everything is indeed a Total Dhamaal. The film is very funny from the start to the end.

Another thing I found with this film, it is a family film. You can sit with your grandparents and enjoy it. That was also one of the factors that I took up this film.

You are reuniting with Anil Kapoor and Ajay Devgn after a long time. How was the chemistry with the duo?

It was wonderful. With Ajay, I had done Yeh Raaste Hain Pyaar Ke (2001). That was a different film though. This [Total Dhamaal] is a fun film. There’s a great camaraderie between all of us. There are a lot of scenes where we are taking on each other.

Were you part of the any of Ajay Devgn’s pranks?

Luckily, I was not the target. On the sets, in between the shots, we were just cracking up all the time. It was so much fun to shoot with all of them. We had many scenes, where all of us were together.

When you guys [Anil Kapoor and her] come together after a long time is there a fear that the audience may not respond to you in the same way?

Luckily, our past records have been very good. So, all of us coming together had obviously pleased people. Talking about us, (pauses)  actually working on the sets, it was as if all these years, had not passed. We just came on the sets did our first scene and that was it.

Can you give an insight into your character? 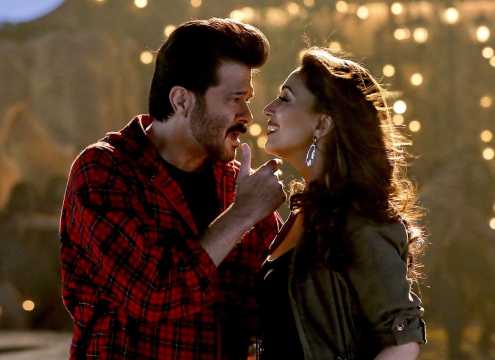 She is a Maharashtrian girl married to a Gujarati. Usually, people have seen us [Anil Kapoor and her] pining for each other, being romantic, but here we are at loggerheads with each other. We are an unhappy couple, so, that is the whole relationship throughout the movie. So, there are a lot of moments which are funny.

You look at Anil Kapoor, and he is still this evergreen guy always bustling with energy. People have often asked the secret for his great health. Do you know what it is?

My first film was with Anil ji called Bajrangi directed by Bapu, who had made Prem Pratigyaa (1989). Something went wrong and it didn’t get made. But we shot for a song I remember, then I did Hifazat (1987) with him. Anil Kapoor still has the same energy. It is funny because you know him for so many years and you know it is never going to change. Early on, I used to be quiet. Now he tells that all these years you kept quiet because you wanted to preserve your energy for the shot.

The film has a remake of Kishore Kumar’s classic track 'Paisa Yeh Paisa'. Personally, what do you think about remixes?

Remixes should be done well. You should retain a certain amount of the song, they shouldn’t lose the soul of the song. For our film, this was a perfect song, for it is all about money. They’ve done quite a decent job of mixing, adding the new elements, yet retaining the charm of the old song.

Do you think when it comes to the genre of comedy, the film industry has been fair in giving equal opportunities to women?

Why just comedy? Men have dominated everything. The writers are the one who have now changed. They are now writing different kind of scripts, themes, where the woman is a protagonist. All the stereotypes where women just romance the hero or played a bawling mother, sister, all that is now gone...

While making a film you don’t think how big a hit your film would be. Every moment we spent on that set was fantastic. For me, it was a homecoming for they were the ones who had given me my first break. My first film, Abodh (1984) was produced by Rajshri [Productions]. So when they approached me for this film, I was only happy to do it. Besides, Sooraj Barjatya was directing it... Yeah, I was very excited. I don’t know where these 25 years went.

After spending over 25 years in the industry, are there times when you fear losing your relevance?

Yes and no. I only took a four year break. Then I came back with Aaja Nachle (2007). The I did TV, judging Jhalak Dikhhla Jaa. I think I did about 5-6 seasons. During that time I also did a few films – Dedh Ishqiya (2014) and Gulaab Gang (2014).  Well, I didn’t think about relevance that time. I just did these films because I liked the story.

Slapstick or tongue-in-cheek. Which kind of humour do you enjoy?

I enjoy both. I loved Charlie Chaplin's humour, which was slapstick. Then I also enjoyed Hrishikesh Mukherjee's humour that was tongue-in-cheek. There is an art to slapstick humour. The tongue-in-cheek humour depends upon the quality of writing. But it has to be performed well. In fact, both genres require a different form of acting skills.

Finally, in your illustrious career you have been chased by many heroes, but is this the first time that you are being chased by animals? 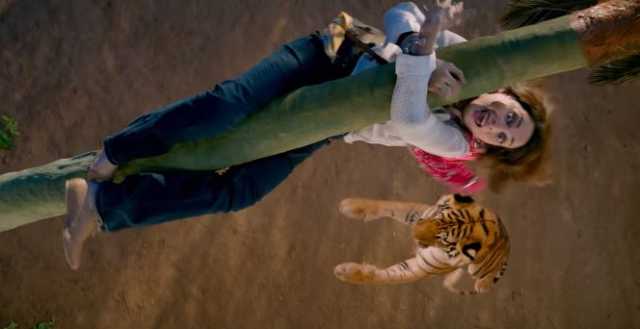 (laughs). That too a tiger! Yes, it’s a first in a film. But in real life, I have been chased by a cow, and then another time I was chased by a horse.

Was it a real Tiger or CGI (Computer-generated Imagery)?

Yes, there are animals in the film. But I don’t want to spoil the fun. Also, it’s the first time I’m climbing a tree.