Hum Chaar's leading quartet discusses why the campus drama in this film is more realistic and rooted and why friends are also family today.

Valentine’s Day is here. While Ranveer Singh’s Gully Boy (2019) is the big release today, tomorrow Rajshri Productions will invite you to the world of Hum Chaar.

Having begun as a child artiste, Kamani graduates to a leading role with Hum Chaar. Malhotra has done TV shows and played the young Haider in Vishal Bhardwaj’s Haider (2014), but this is his first big break in Hindi cinema.

Pandey is an alumnus of the National School of Drama while Sharma is in her third film.

Hum Chaar is a tale of four friends from medical college who drift apart but are brought back together by destiny ten years later.

It is rare to find rookie, unconventional actors with no godfathers being picked by a marquee production house for leading roles. No wonder the quartet is in a happy mood. They seemed to have done their homework on Rajshri films, perhaps expecting to be quizzed about it. But we had no such ideas. Excerpts from the fun-filled conversation:

Growing up, I heard that friendships forged in school last long while the friends we make in college eventually end up as mere acquaintances. Does Hum Chaar prove or bust this theory?

Tushar Pandey: There are two things to that. College is a time when you start becoming serious in terms of the direction you want to head in. School is where you spend time with your mates so much that eventually that bond becomes stronger.

Now what we are trying to portray is something to do with both folds. We are in medical college for five years, in a hostel. So you live there. That's why we are not kind of going to break or portray one, but it's kind of fusing together.

Prit Kamani: College is a time when you are in a phase of emotional maturity. You understand aspects of your life that you never really knew before.

Simran Sharma: In school, we feel no responsibility. Our lives revolve around school and friends. But once in college, you start thinking who am I. So you get busy with your goals. But I think every once in a while life reminds you that your friends are important. Our film does that.

Simran, it's a clichéd question to ask about characters, but the teaser attributed some intriguing characteristics to each leading character. Sundar, sanskari, but could you tell us in a few words what makes Manjari sab pe bhari [dominant]?

Manjari is sab pe bhari because she is strong-headed. She has a direction in life. I think people who know what they are doing are very powerful. Manjari comes from a conservative background, but even growing up in this environment, she decides to become a doctor. She convinces her parents and gets admission to a medical college.

Anshuman, I haven't watched your show, but I wonder, since you come from [the MTV show] Splitsvilla, you would know better about rifts. Is that what makes you a perfect fit for Hum Chaar?

So was it curiosity that made you take up Splitsvilla?

Yes, curiosity, but I also wanted to have fun. I was tired of shooting for 65 days at a stretch. I wanted to do something new.

I was scared to do the show. I wasn’t sure [about it] as around the same time I was doing a film with Nawazuddin Siddiqui, Rahasya 2. That got shelved.

I used to go to the Viacom office for the [Rahasya 2] workshops. These people saw me there and wanted me to be part of Splitsvilla. It was I think the last day of Hum Chaar and I got a call to join the show. I thought I should do it just for the fun of it.

Prit, this is your first film, and it is a Rajshri film. Does that make it doubly special?

Absolutely. I always wanted to be an actor. I started off as a child artiste when I was nine years old. I worked in ad films, TV shows — Shaktimaan. I was this cute boy who could dance, do a little acting. The world of films fascinated me. To be the 'Bollywood' hero was my dream. 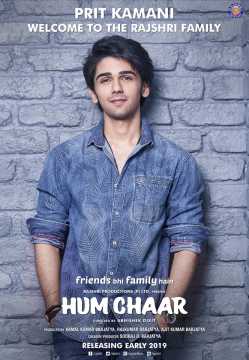 Rajshri films have a great legacy. I didn’t stay in a joint family, but we are a very close-knit family, where the concept of cousin didn’t exist. As a kid, when someone asked me how many siblings I had, I would say, “I have seven brothers, seven sisters.” We cousins were very close.

I was younger than all my sisters. We would watch Rajshri films together. They used to tell me that maybe one day you should become like Prem [Salman Khan’s character in all his Rajshri films]. Now when I am a part of a Rajshri film, I feel I have made the family proud.

Tushar, of all the characters, Surjo stands out purely because he is this rustic Jaunpur boy. It's fun to watch him. How was the experience for you?

Firstly, I’m not from a village. So I don’t identify with Surjo. I was born in Delhi, studied in London, and now stay in Bombay. For me to play a character that is so far away from me was the most exciting thing. It is great for any actor to suddenly change your accent. The good thing is that the director, writer Abhishek Jain, is from Uttar Pradesh. He is good with accents. I didn’t need to go to a voice coach as the director himself was a coach.

For me, English is like my first language. This character doesn’t understand English. That aspect automatically makes you think, how do I create my character? What nuances do I bring in? This character has a lot of punches. So, it just made me aware that I can craft a character that would be exciting for me to hold on to and imagine how to play it.

Prit has spoken about it, but I would like the three of you to tell us about the influence of Rajshri films in your lives.

Simran Sharma: It was huge! Be it Hum Saath-Saath Hain (1999), Hum Aapke Hain Koun..! (1994). Growing up these were the films that were always playing on television. l even loved Vivah (2006). It’s a different film. So there was a time when my brother and I had these films recorded and we would play them many times. We never got bored with them.

Tushar Pandey: Honestly, just one film, Hum Saath-Saath Hain, played in my house. It wasn’t like the family all sat together to watch the entire film, but while the film aired, the channel was never changed. Now that I am doing a Rajshri film, my friends tell me that somehow they knew 10 years ago I would do this, when they watched Hum Saath-Saath Hain being played in my house regularly.

Anshuman Malhotra: As a child, you do have arguments with your parents, leaving them upset. Whenever I watched a Rajshri film, I would feel guilty. I felt I am a bad human being to have hurt my parents.

Looking at the teaser and trailer, Hum Chaar comes across a film of two halves. The first where you people are thick friends. The second where it all goes sour and the four of you have this disgruntled look on your faces. Was it more difficult to play the second part? Were you guys kept away from each other?

(All four in unison) We started the other way round!

Tushar Pandey: We had rehearsed enough to get into our characters. We spent a month on rehearsals. They rehearsed with the four of us for a month in Mumbai. Then they, the director and the DoP [director of photography] and one assistant director, took us to the set location. Abhishek Jain made sure we got into character before we started shooting.

Friends bhi family hain, that's a fine theme, but would it be wrong to say this film sets a new chapter in Rajshri's history, as the primary focus shifts from family to friends?

Simran Sharma: Yeah, but it's not like Rajshri is saying no family but friends. They are saying friends as family. I just think they are merging the two. As we say, this is Rajshri 2.0.

Tushar Pandey: It’s also Rajshri meets this millennium. They have moved into an urban setting where you spend more time with friends than family. But they have held on to what the soul of Rajshri films is about. At the end of the day, it is about the simple connection of love, be it your friends, relatives, or family.

In the 1990s, campus dramas were more escapist in nature. Now, the focus has moved from urban settings to smaller towns, the Hindi heartland. We don't have too many campus dramas now, but can we expect them to be made in similar style again?

Simran Sharma: I don’t think one can call Hum Chaar a campus drama. The campus/college is just one aspect of the film which was essential to the story and hence it is there.

Anshuman Malhotra: If you say escapist, no, our film is not that. It’s more grounded, more real, mixed with personal experience and a bit of imagination. If you see the film in the campus aspect, it is very character driven. The plot only comes later, but you can identify with the characters. It’s not as if Manjari enters the college and you have four guys moving around her.

Prit Kamani: You won’t get to see us entering college on bikes, doing some stunts.

Finally, does each of you have a friend you are no longer in touch with? And would you like to send them a message through this interview?

Tushar Pandey: There is a very old friend called Raghav. We are in touch but our individual paths have seen us drift apart. I do meet him once in a while, but it would be nicer to stay more in touch with him.

Simran Sharma: I had these friends in college, Rohan and Deeksha. I was very close to them at one point, but we are not in touch anymore.

Prit Kamani: I have two friends, Syed and Kashish. I have totally disconnected with them as I have been really busy. Guys, I am sorry. I would be glad if you can come and meet me, and hug me.

Anshuman Malhotra: Harmeet, Dhiti, Riya, Arjun, they are my school friends. There are times when I am not able to talk to them. I would just like to apologize to them. Please call me, I am a little lazy.