Rajdweep hails from a small village in Assam where there are no movie theatres in a radius of 30 kilometres.

Countless stories of never-ending struggle notwithstanding, a few from the small towns and villages of India have managed to achieve name and fame in Mumbai’s film world, drawing ever more hopefuls to seek their fortune.

One such hopeful is Rajdweep, who hails from a village named Dhing in Assam in India's Northeast.

There is no cinema hall within 30 kilometres of his village, he says. Yet Rajdweep was among more than 3,000 hopefuls who entered the first edition of the Cinestaan India Storytellers Contest last year.

Some months later, to his surprise, he found himself in Mumbai, being feted as the fourth winner (or third runner-up) of the contest by a jury comprising actor-producer Aamir Khan, writer-director Rajkumar Hirani and screenwriters Anjum Rajabali and Juhi Chaturvedi.

The first prize was bagged by Christo Tomy from Kerala while the second, third and fifth prizes were won, respectively, by Biplab Goswami, Satyen Bordoloi and Sagar Pandya.

"I had not even thought I would get selected [for the final round of script submission]," Rajdweep admitted later during a conversation with Cinestaan.com.

Obviously, being one of five winners in a contest with a total prize money of Rs50 lakh means a lot to Rajdweep. “It was like a dream for me," he recalled. "I had no connection with 'Bollywood'. I had never been to Mumbai despite having written songs for two films. But I knew that one day I will go to Mumbai!”

The aspiring writer had expected to face a long struggle in the big, bad city. His expectation has been belied somewhat, but, of course, he is not complaining.

There was a time when Rajdweep was downcast. Some of his friends were working in the film industry while he was stuck in Assam. “I also had to shoulder the burden of providing for my family," he said. "This made it difficult for me to just give up everything and go to Mumbai to try my luck.”

When he chanced upon a Facebook video posted by Aamir Khan speaking about the contest, there were just 10 days to go for the synopsis submission deadline. Worse, he was not a member of any screenwriter association. (Registering one's script with a screenwriters' association is a prerequisite for entering the contest.) A friend in Mumbai helped him complete the registration process quickly while Rajdweep thought up a plot and wrote a synopsis.

Rajdweep’s story has an unusual title, Ishqlogy. “Just like technology,” he explained. “It is about a fight between trust and science. Whatever science tells us is already proven. But there is no proof in trust. The film tells us that like science, even trust can’t be wrong. It’s a love story which also has a social issue about the medical field.”

Asked the status of the script after the contest, he said it is with some production houses for evaluation. “Nothing has been finalized," he said. "Some well-known production houses are interested and talks are going on. Some others have said that if they don’t get Ishqlogy, they are willing to look at my other stories.”

Rajdweep revealed that the cinema scenario in Assam is quite bad. The state does not have a proper film industry. As a result, there is not much scope for writers.

But the theatre movement is strong and Rajdweep had latched on to it some years ago, writing and directing plays. “We have a Jatra party which is quite advanced,” he said. It is basically the practice of mobile theatre.

Rajdweep has been writing six to seven plays a year. “I use all my creative thoughts in this venture," he said. "As I am also a lyricist, I also write the songs for my plays. So we don’t get much time. We have to write in a hurry.” That experience stood him in good stead when he had to think up and dash off a plot summary in less than 10 days for the contest.

Rajdweep came to Guwahati over a decade ago to do his master's in economics. But since school, he was inclined towards writing. And coming from an average middle-class family, his immediate concern was to start earning money. That is why he began writing serials for Assamese television channels from 2007 to 2012.

His journey into theatre began in 2013 when he wrote his first play. But his method wasn’t conventional. “I wrote it in the way movies are written," he said. This went well with the audience as they got to see something new after a long time. Theatre audiences were dwindling anyway and so experimentation was no longer being frowned upon, a boon for Rajdweep.

Rajdweep and his team specialize in mobile theatre. The troupe travels from place to place to perform. “I was the youngest mobile theatre playwright then in Assam, at around 27,” he said. “We would visit one village for three days and do three shows a day. If the audience is glued to its seats for two hours, it reflects the success of the play. We would get up to 2,000 people per show. In my play Bomoriya, Papon gave the music and sang the title song. Such things attract youngsters.” 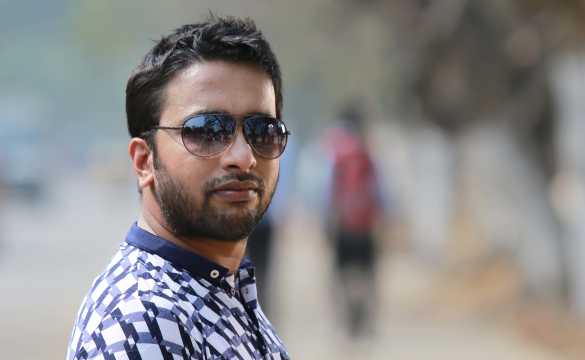 We know how important the first poster is for a movie. Rajdweep said the scene is similar for mobile theatre. “The poster needs to be interesting enough to pull people to the theatres,” he said.

Rajdweep and his team pick subjects that are understood by village and small-town audiences. “I did a play on TRPs [television rating points, an audience measurement yardstick] in 2015. But the village audience couldn’t understand what is TRP,” he said.

Naturally, he believes Ishqlogy also won’t find takers back home. “If I had sent Ishqlogy to a producer [in Assam], it would have straightaway been rejected," he admitted. "To come out of the mobile theatre zone and think of a subject like Ishqlogy itself was a challenge for me.”

But Rajdweep believes strongly in the line from Om Shanti Om (2007), which in turn drew from Paulo Coelho's The Alchemist: If you want something badly enough, the universe conspires to ensure you get it.

“I have realized that if we yearn for something with all our heart, we get it," he said. "I always knew that whenever I go to Mumbai, I will already have some work. This dream was fulfilled for me by Cinestaan.”