The film depicts the lives of the elderly parents, who often live their life in negligence, as their children choose to shift away from them.

Leena Gangopadhyay and Saibal Banerjee’s upcoming drama Sanjhbati (2019) is all set to hit the screens before Christmas. Sanjhbati, produced by Atanu Ray Choudhury, features Soumitra Chatterjee, Lily Chakraborty, Dev Adhikari, Paoli Dam and Sohini Sengupta in crucial roles. The film depicts the lives of the elderly parents, who often live their life in negligence, as their children choose to shift away from them.

On 29 November, at the trailer launch of the film, Gangopadhyay shared how she gradually, with her co-director and producer Banerjee, formulated the concept of Sanjhbati.

"I first got the concept from Atanu Babu [producer Atanu Ray Choudhury] when he narrated me the story of a woman he is personally acquainted with. We met the lady then and after listening to her account, I felt there must be many other people who go through similar situations," the filmmaker, who also happens to be one of the important members of West Bengal Commission for Women, stated.

Sanjhbati means the flickering lamp of dusk and in the context of the film, it stands for the remaining hope in the remaining days of life. Interestingly, when Gangopadhyay was thinking of the title of the film, the producer took the director duo to an NGO called Sanjhbati.

“Most of the elderly members of Sanjhbati were women and they had similar stories to tell. From their accounts, not only [did I get] a comprehensive idea but I also realised that I have had similar situation at my home and I had ignored the plight of my parents too," she admitted.

Gangopadhyay’s experience of working with the Commission for Women helped her in sketching the characters too. “I received numerous complaints of being deprived of attention from their children and sometimes, the insensitive sons and daughters also throw them out of the house. They do not even hesitate to take away the shelter from their parents," she recounted.

She particularly mentioned that sometimes, people do not have a choice but to stay far away from their aged parents, but it is quite disheartening when they intentionally choose to ignore their requirements.

“As we grow up, we build our own circle of friends and create a world of our own. On the other hand, our parents tend to become lonelier. We start looking at their situation from our position. We tend to become too rational and in the process, we begin to ignore the emotional equations," the filmmaker elaborated.

Gangopadhyay felt when parents are done with their responsibilities of bringing up their children, they tend to become more emotional too.

Sanjhabati is Dam’s second film with the director duo after Maati (2018). Her character of Phuli is in complete contrast with that of Maati. Meanwhile, Adhikari will be seen in a completely non-glamorous role in the film, much different from his usual macho avatar.

“I have never said that no other actor other than Paoli or Dev would have done justice to the characters. However, after working with them, I could be entirely convinced of them as Chadu and Phuli," the director stated. 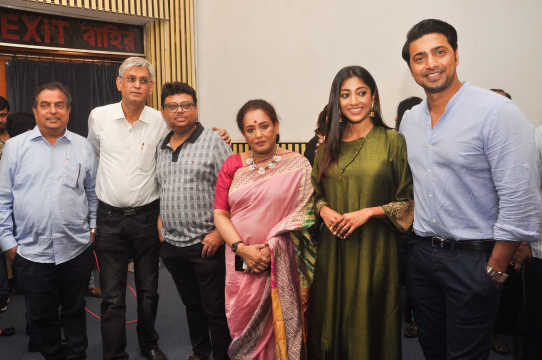 Gangopadhyay was apparently not very sure of casting Adhikari in the character of Chadu. However, with utmost dedication and sincerity, Adhikari could eventually come out of his macho image and win Gangopadhyay’s heart as Chandu. “Within the second or third day of shooting I could realise that I had made a mistake in doubting his capabilities," she revealed.

She also went on to mention that Adhikari has no ego. “We are newcomers compared to his experience in the industry. He could have easily treated us so but he did not. Secondly, he is extremely jovial and he always made sure to lift the mood on the floor. He loves to have fun and never gets tired of working," Gangopadhyay commented.

What makes Adhikari different from all the other celebrity actors, according to Gangopadhyay, is his undaunted will for learning. “Despite working in so many films, he listened to our each and every instruction for dialogue delivery, repeatedly. I sincerely feel that achievers have certain good qualities and Dev is no exception in this regard," the director remarked.

Speaking of her experience of working with Chatterjee and Chakraborty, Gangopadhyay said, “I have worked with Soumitra da before but this is my first project with Lily di. We always learn from artistes of their stature. It is not only about learning dialogue delivery or shot composition but also the various stories and topics that come up in their association are worth paying attention to. Each and every moment with them adds some value.”

According to Gangopadhyay, the entire team worked without the pressure of ending the film in a limited time. While they eagerly waited for their adda sessions between shooting schedules, they hardly realised when they completed the film.

“We have worked for this film for almost a year and have attempted to tell a story to which the audience will closely relate with. I want more people to watch the film and share their honest feedbacks,” Gangopadhyay concluded.