Need to bribe Animal Welfare Board, only then will get certificate for Biriyaani, says Sajin Baabu


In a candid chat, filmmaker Sajin Baabu talks about the impediments faced by him in releasing his latest film, Biriyaani.

Sajin Baabu’s latest film Biriyaani chronicles the life of Khadeeja (Kani Kusruti), a married Muslim woman who is confined in her home, forced to hide her desires in the name of religious and societal norms. When fate leaves her all alone, she decides to make her own choices and liberates herself. The film was screened at the Kazhcha-Niv Indie Film Festival (KIFF) 2019.

Talking about his latest film on the sidelines of the Kazhcha festival, the director revealed that the inspiration for Biriyaani did not come from a single, isolated incident but from a series of incidents that have been taking place in Kerala over the past three or four years.

Sajin Baabu, who is also the writer of the film, spoke of the inspiration and said, “The film is not directly taken from some incident, but I know one lady and saw her Facebook post. That inspired the idea in me. I am born in a Muslim family and I also see a lot of people who have had these kind of experiences within their homes. Not just the ISIS [Islamic State of Iraq and Syria] part of the story [in the film] but the other aspects like the state of women. So I started to write the film with my own experiences. Sometimes the character [of the protagonist] is me."

The film shows certain instances in graphic detail which are disturbing to watch. Talking about why they were included, he said, “There are certain images that have been in my mind and I just want to portray those images. I tried to reproduce those images. In my first film also, which is 1 hour 15 mins long, there are only 15 dialogues and mainly images.” 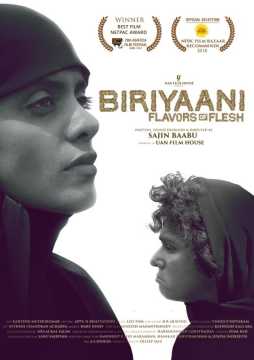 Although Sajin Baabu plans to release the film in theatres, he has been facing difficulty in obtaining the necessary certificate from the Animal Welfare Board. He said, "You need to give a bribe to the board, only then you will get a certificate. For Biriyaani, I have a censor certificate. The jury has already seen the film and they suggested 22 cuts, which I accepted because I don’t have money to fight against them.

"Then I was asked to produce a certificate from the Animal Welfare Board. I applied for it but for the last two months I am just calling them and they are not taking my calls. Suddenly they called and said that if you are ready to pay a certain amount, we will give you the certificate within two days. I said I cannot do that. So this is the situation I am facing. I cannot do anything. Without the censor certificate, I cannot apply for awards or release the movie."

The filmmaker is exploring alternative platforms where he will be able to screen the uncensored version, even as he perseveres in his attempt to get the film released theatrically.