Actress Kangana Ranaut, who plays J Jayalalithaa in the upcoming multilingual biopic Thalaivi (2020), on Thursday, 5 December, paid homage to the former Tamil Nadu chief minister and legendary actress on the sets of the film.

Actress Kangana Ranaut, who plays J Jayalalithaa in the upcoming multilingual biopic Thalaivi (2020), on Thursday, 5 December, paid homage to the former Tamil Nadu chief minister and legendary actress on the sets of the film.

Jayalalithaa passed away on 5 December 2016 after being hospitalized for over 75 days and suffering a cardiac arrest.

Kangana, who was last seen in Judgmental Hai Kya (2019), spent close to six months on prepping for this project. She underwent Bharatanatyam classes, learnt Tamil and even spent hours in the prosthetic make up sessions.

The project was announced along with its title and first look poster on 25 February on the 71st anniversary of Jayalalithaa. 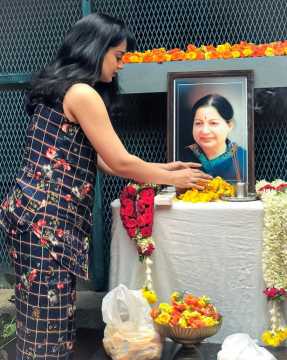 When Kangana was announced for the titular role, the choice was received with some backlash.

Soon after the announcement, Vijay clarified his stand on roping in Kangana in an interview to the newspaper Times of India.

“This is a pan India film, and Kangana is apt for the role. She is one of the biggest stars in India today and I think it is right that a top star plays the role of an important politician. This way, the story will also reach audiences across India. We consider this a pan-Indian film, not a regional one,” Vijay said.

The film has music by GV Prakash Kumar while Nirav Shah is the cinematographer. Veteran writer Vijayendra Prasad of Bajrangi Bhaijaan (2015) fame has been roped in to oversee the writing process.

The project has gone on floors despite Jayalalithaa’s niece J Deepa filing a civil suit in the Madras high court to restrain the team from making a biopic based on her aunt’s life.