Chintu Tyagi was very challenging for me: Kartik Aaryan on becoming a husband

With Sonu Ke Titu Ki Sweety (2018) and Luka Chuppi (2018), Kartik Aaryan catapulted to box-office success. With Pati Patni Aur Woh, he is now entering the space of a married man, a step-up from the bachelorhood he promoted in his previous movies. According to Aaryan, however, it has not been easy.

"I am not married [in real life], so to have that sense of a man who has been married and tired of it was difficult," he explained. The film, an updated version of the 1978 film of the same name, is directed by Mudassar Aziz and also stars Bhumi Pednekar and Ananya Panday. Aaryan insists this will be completely different from the BR Chopra film, though, like Pednekar, he said he had not seen the original because "I did not want it to influence my process".

Have been looking for such a balanced script from the start of my career: Bhumi Pednekar on playing the Patni

Despite his growing popularity, Aaryan seems to have entered a phase where he is choosing different roles. Pati Patni Aur Woh will be followed by Imtiaz Ali's untitled project where the actor has been cast opposite Sara Ali Khan. Aaryan also has Bhool Bhulaiyaa 2 and Dharma's Dostana 2 in the pipeline. 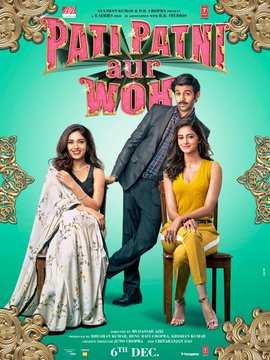 "I think I am in a good phase," he shrugged. "I used to not have a lot of choices before, and I had to give my best for the auditions. Now, after Sonu Ke Titu Ki Sweety (2018), I have a box-office standing and producers have started to believe in me. With Luka Chuppi (2019) becoming a hit, there has been a change in the perspective of filmmakers. I had not expected that, and yet its commercial success has ensured that I have come this far." Excerpts from the interview:

I am happy. The character of Chintu Tyagi is very relatable. It took some struggle to etch the character. For me particularly, because I had to work on the physical appearance and dialect. I have never sported a moustache and gained weight for my film. That's because there is a monotony in his life and he stops caring about himself. It is a story about that man. I gained 7–8 kilograms for the role. The clothes were ordinary and, naturally, there were memes made about it.

What was your reaction when the script first came to you?

[Creative producer] Juno [Chopra] first came to me with the script and then I met Mudassar Aziz. When the idea came to me, I was very excited. It was a very interesting subject. Love triangles have been celebrated in India and lend themselves to comedy and entertainment.

The modern take on relatinoships in this film has not yet been seen. It is a very progressive film, with strong characters throughout. Not just the protagonists, but also the supporting characters have been written very well. 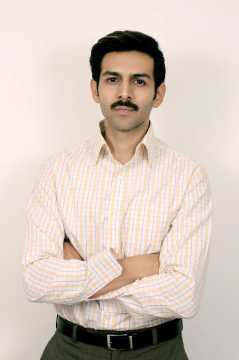 The film also has a strong commercial sense. After Luka Chuppi, I was not too keen on a 'Pati Patni' film, but the script was so good I couldn't let go of it.

Have you seen the original?

I haven't seen the original film. I am a big fan of Sanjeev Kumar, but this is a very modern take. That film came in 1978, and this is 40 years later. The reason I did not see it was that I did not want it to influence my process.

After Pati Patni Aur Woh, and Bhool Bhulaiyaa 2, do you think you have moved on from being the 'Punchnama' guy?

I think I am in a good phase. I used to not have a lot of choices before, and I had to give my best for the audition I clear. Now, after Sonu Ke Titu Ki Sweety (2018), I have a box-office standing and producers have started to believe in me. With Luka Chuppi becoming a hit, there has been a change in the perspective of filmmakers. I had not expected that, and yet its commercial success has ensured I have come this far.

I am also doing Imtiaz [Ali] sir's next film, which will see me in a very intense role. Bhool Bhulaiyaa 2 is an out-and-out massy film. My characters are growing different with each film, but are continually relatable. I keep an eye on that factor.

With the Punchnama series and even Sonu Ke Titu Ki Sweety, there were sections of the audience unhappy, with claims of portraying 'misogyny'. What do you think of it?

Punchnama remains a series close to my heart. It is a cult success, and that is because it has been accepted across the country. Now, people watch it at homes, at hostels. With [writer-director] Luv [Ranjan] sir, I had also done Akaash Vani (2013). It was a complex subject, but it did not work at the box office. Since it did not work, people don't really talk about it.

We never worked on these stories to make a point against someone. We simply thought the content was funny and strong. Every story has some pros and cons. We were making a film for entertainment. My female fan following has grown because of these films.

I suppose our audience is smart enough to know when filmmakers are simply saying stuff because it is funny and when they are trying to make a point. You are there to laugh on them rather than take them seriously.

Yet, there has been an issue with a line of dialogue in this trailer. It has now been removed in the film, and Bhumi Pednekar did mention that it was 'a lapse of judgement'. Would you elaborate on that?

We did not judge it that way. The issue is not that in the film at all. It was a lapse of judgement in the way that the sequence of dialogues was not thought through. The film will be received well because it has strong content. Since the issue was not directly related to the story, we decided to remove the dialogue as soon as we realized our mistake. We have rectified it.

There are some times when filmmakers choose not to remove it. They do think some characters are that way. Here, we could change it. But I want to go back to talking about the film, and I can assure you that when you come out of the film you will be surprised. It is strong content that it speaks of.

Do you think the backlash is owing to people having unlimited access to media through which they can react instantaneously, at every little thing?

It happens. We live in a time when people have that power. It is to be appreciated because things would be more difficult if there was no power. Everyone says something. As long as there is more love than hate, we can get by. You cannot make everyone happy. I can't even make my parents happy at everything I do (laughs).

Do you think this is the more challenging role in your career so far?

Yes, because I had to try a lot of things for the character. I think Chintu Tyagi was very challenging in terms of the physicality and the dialect and the world he is in. It is a very different world in the way he speaks, interacts, and describes. I am not married, so to have that sense of a man who has been married and tired of it was difficult. I had to be conscious of calming myself down, bring on the sense of maturity and experience of life for the character.

Sometimes I had to work on my character before I got to the sets. I would put on a lethargic walk, the walk of someone who is tired of the monotony in his life. These little things were something I worked on. To speak slowly, like he is telling the story of his life to anyone.

Sonu Ke Titu Ki Sweety established Kartik Aaryan as someone quirky, fun, young. But 2020 looks very different with Imtiaz Ali's film, as he is known for his intense characters.

I am in a phase where I am getting opportunities that are different with every step. After Pati Patni Aur Woh, there is Imtiaz sir's next. He is one of my favourite directors. He has completely changed me as an actor. The process of my thinking has changed and the way I look at a character is now different. It is a character I am looking forward to.

After that comes Bhool Bhulaiyaa 2. It is one of my most massy films. It will go to every home. After that is Dostana 2. That is a film which will push the envelope. It is a film you would never expect me to do, yet it is something I really feel is the need of the hour.

All these films have a template and expectations set by earlier versions. Though these films might not necessarily be sequels, there will be comparisons. Does that bother you?