The actress said Abhirup Ghosh's film throws light on the impending future with climate and environmental changes and is likely to shock viewers.

In the trailer, Chakraborty is seen introducing herself as Akira, a survivor of mass destruction who sets out on a road journey in her attempt to find any remaining traces of human civilization. Instead, she comes across zombies Anil (Ghosh), another survivor, and Raja Haridas, a ruler played by Dutta. 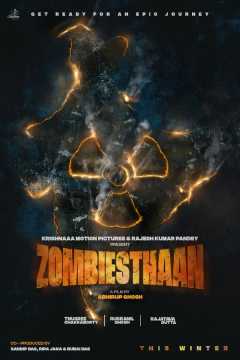 On 27 November, at the film's trailer launch, Chakraborty said the film's content appealed to her when she was first approached by the director. “No films on zombies have been made in Bengali cinema," she said. "Secondly, when we read a script, we start visualizing the plot. When I was reading Abhirup’s script, I could relate my experiences of watching English zombie films and match those visualizations.

“Given that this is a unique concept, we remained discreet while shooting," the actress continued. "No announcements or press events were conducted until we finished shooting.”

Chakraborty added that the director did not want to reveal the virgin locations where he had shot the film because he did not want to spoil the movie's aura by giving out behind-the-scenes information.

She added that the shoot was quite difficult and they had to go through many challenges. “We are all aware of the budgetary constraints in Bengali cinema and, in this film, we had to create a specific time zone," she said. "However, the way the film has been shot and the visual effects will amaze you. I am already coming across people eager to watch the film.”

The film is set a decade or two in the future, when a viral outbreak wipes out 90% of human civilization. However, Akira survives. “The film presents a futuristic environment in which a man even kills another and eats the flesh. It will take audiences to the early period of human civilization when people used to kill and eat raw flesh for survival,” said the actress.

Chakraborty praised all the artistes who played zombies in the film. “They are all newcomers, yet they have managed to make some of the most memorable moments,” she said.

The actress said the film throws light on the impending future of the world with climate and environmental changes. “We don’t know where we will stand in the next 10 years — whether we will have a much shorter life span and be able to survive the forces of nature. The film will create an alarm about climate change. It shows there is not much time left,” she continued, and hoped Zombiesthaan would encourage directors to make more such films.

Chakraborty stated that the first-time director was "extremely sorted" in his mind when conducting the shoot. “He appears to be shy but is quite the opposite on the floor," she said. "He explains very clearly what he wants.”

She also expressed gratitude to co-star Dutta for encouraging her to get into the depth of the script by always raising her curiosity. “He not only asked questions himself, but also encouraged me to do the same," she said. "For this reason, the quality of work got even better. It has been a delight to work with Rony-da [Dutta]. I have learnt a lot from him and he is my biggest critic.”

Zombiesthaan is slated for release on 13 December.