A day after announcing that its release date would be pushed again, Anurag Basu’s next film finally has a title, Ludo. The multi-starrer’s release date has been delayed a couple of times before finally settling on 24 April 2020. 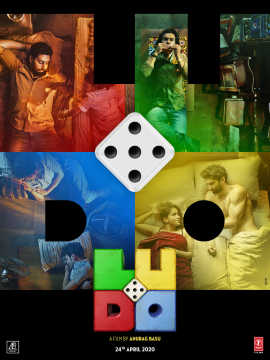 The colorful poster depicts four different stories featuring a few of cast from the film. One story focuses on Abhishek Bachchan, one on Rajkummar Rao, and another with Aditya Roy Kapur and Sanya Malhotra. The fourth blue-tinged corner likely features young actor Rohit Saraf, last seen in The Sky Is Pink (2019).

The poster reflects the four corners of a Ludo board, with the red, yellow, green and blue corners. A single die, featuring the number five, is positioned in the middle. Interestingly, all the characters are seen either in bed, or lying in repose.

The game Ludo was first played in India in the 6th century, when it was known as Pachisi. It was later changed to Ludo and is known by several other names around the world.

Ludo (2020) will also feature the music of composer Pritam.