The actress returned to India to perform the special song for the upcoming film.

Shriya Saran in a still from the film

Actress Shriya Saran will next be seen in the upcoming Sab Kushal Mangal (2020) in the song 'Naya Naya Love' with the film's cast Akshaye Khanna and Priyaank Sharma. The actress made a special appearance for a song in the Telugu film, NTR: Kathanayakudu (2019) earlier this year.

Producer Prachi Nitin Manmohan confirmed that Shriya would be part of the film, "When I suggested Shriya’s name, everyone unanimously thought she is the right choice. Since she is a friend, I called her to ask if she would do the song and she readily agreed. I am really thankful for her gesture. She came from Russia, rehearsed for a day and shot the song in just two days." 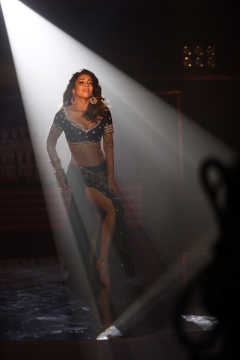 Choreographer Shabina Khan elaborated on the song saying, “It is a very promising song and comes at a major turning point in the film. Shriya is a very good dancer and has given her 100% to it. It took her a day to practice the steps and just two days to shoot the song. The audience will have another ultimate hook-step to look forward to. Also, the music is pretty groovy and its rhythm will definitely get to you.”

Shriya has cut down on her film projects since her marriage to Andrei Koscheev in March 2018. She was last seen in the Hindi film Phamous (2018) and the Telugu film Veera Bhoga Vasantha Rayalu (2018).

Sab Kushal Mangal, directed by Karan Kashyap, is due to be released ‪on 3 January 2020‬. The film marks Prachi Nitin Manmohan’s debut as a producer while Priyaank Sharma, son of Padmini Kohlapure, and Riva Kishan, daughter of Ravi Kishan, make their acting debuts.